A Review of “South African Schooling: The Enigma of Inequality”

CGD’s education program studies the role education can play in building more equal and more prosperous societies. So when a new volume edited by Nic Spaull and Jonathan Jansen South African Schooling: The Enigma of Inequality came out, it shot right to the top of our reading list. The book provides an incredibly detailed account of inequality in South Africa’s education system. And it does a remarkable job of using government and survey data, along with detailed accounts of policy negotiation and reform, to explain why it is that the more things seems to change, the more they stay the same. 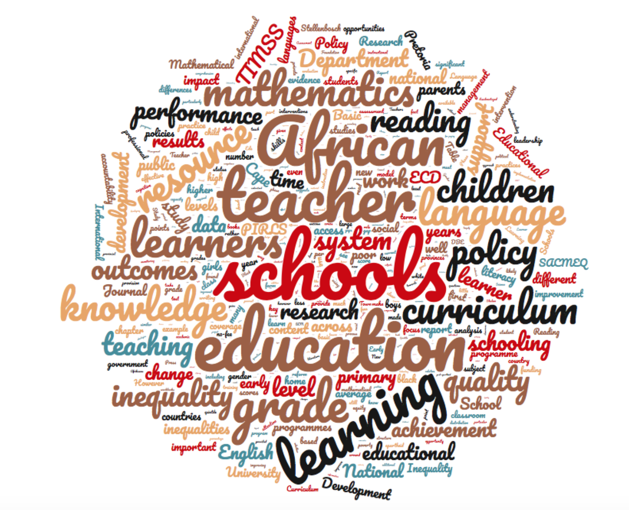 The most commonly used words in the book.

Over the course of 19 chapters by 30 South African authors, Spaull and Jansen curate a compelling account of South Africa’s persistent educational inequality

Nic Spaull introduces the topic in his opening chapter “Equity: A Price Too High to Pay?,” giving a succinct overview of the key dimensions of inequality in education in South Africa. Exclusion and inequality in the new South Africa are, according to Spaull, caused by race, class, the ability (or lack of it) to pay school fees, and feeder zones. Spaull argues that weak capacity in teachers and state, combined with poor accountability, is the major impediment to progress (see figure 1) and that admissions quotas, pro-poor allocation of targeted resources, and a reversal of falling per-pupil public expenditure share the greatest potential to drive change. 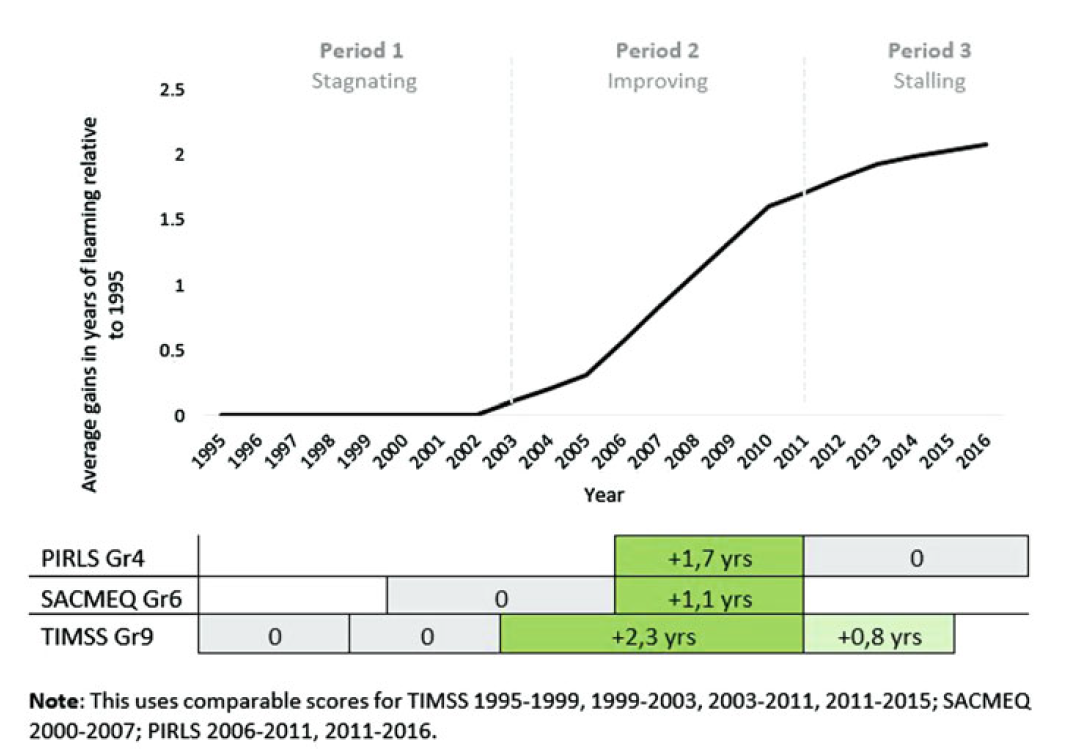 Turning to outcomes, Servaas Van der Berg and Martin Gustafsson paint a reasonably positive picture in the chapter “Educational Outcomes in Post-apartheid South Africa: Signs of Progress Despite Great Inequality.” They show overall improvement in outcomes; declining inequality in learning, by race and overall (in other words, the floor is rising); and that South Africa’s level of inequality, while high, is not unusual for a country with low average performance. But, when they introduce the concept of academic wastelands—schools which do not produce even a single learner performing at an intermediate international level (with echoes of the literature on equality of opportunity and “lost Einsteins” in the United States)—things start to get bleak. If you believe that talent is everywhere, then a complete absence of “bright stars” in so many schools “could be a sign of general dysfunctionality of schools that is so severe as to obliterate the possibility of exceptional individual performances.” 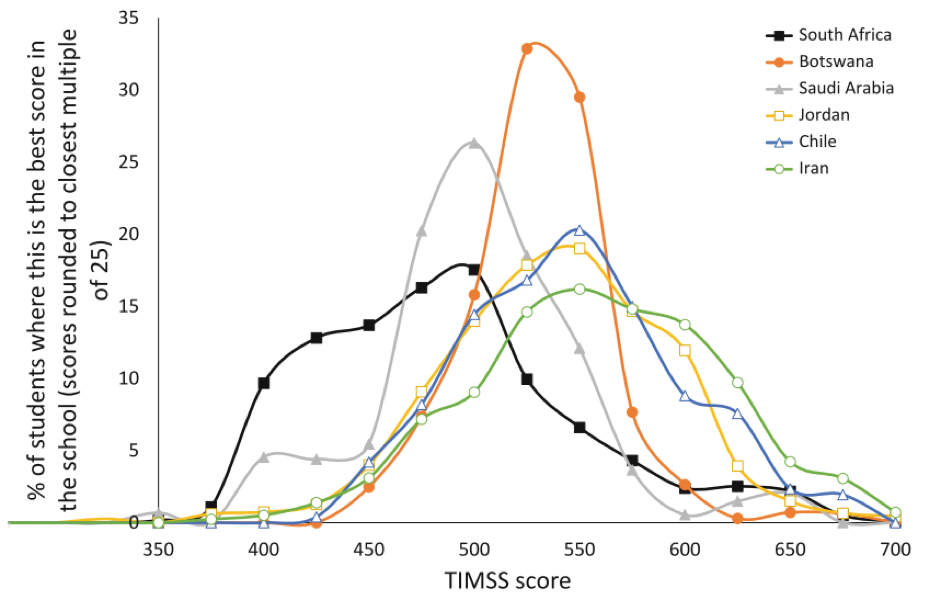 Nompumelelo Mohohlwane takes us on a fascinating journey through the challenging topic of language in South Africa in “How Language Policy and Practice Sustains Inequality in Education.” She highlights the stark conflict policymakers face between the clear educational advantages of teaching early grade learners in their home language and the challenges of prioritising African languages when the returns to proficiency in English are so astoundingly high. She calls for careful investment in African languages in education resourcing and policymaking to overcome historic and growing inequality driven by the deliberate domination of English and Afrikaans.

Tia Linda Zuze and Unathi Beku describe a typically unequal picture of attainment and achievement in “Gender Inequalities in South African Schools: New Complexities”—but it does not lean in the direction that most might expect. Using two decades of nationally representative attainment and assessment data, including outcomes from 19 regional and international assessments, they find that, nationally, girls achieved better average results than boys across subject areas, grade levels, and time. And yet, girls are less confident about their mathematics ability, are underrepresented in STEM-related degree programmes, and face different pressures to drop out of school (24 percent of girls who dropped out cited pregnancy; financial constraints were the most common factor for boys). Even in countries where girls outperform boys at school, they continue to face discrimination in the workplace and underrepresentation in political leadership; and school safety is a good example of where “new dynamics of gender inequality in education are becoming clearer.” This rightly pushes research towards factors either at school or in the external environment that resist equality in adult outcomes and prevent girls from converting academic achievements into better social, health, and economic outcomes.

Stephen Taylor makes the case for randomized controlled trials in “How Can Learning Inequalities be Reduced? Lessons Learnt from Experimental Research in South Africa.” He acknowledges that, thanks to good, quantitative analysis of nationally representative data, we have a clear descriptive picture of how educational inequality perpetuates social inequality. But, he argues, we still have limited knowledge on how to reduce this educational inequality—in other words, which policies and programmes are most effective at closing the learning gap between rich and poor children. His rapid overview of experimental and quasi-experimental studies of education programmes in South Africa has succinct and sobering conclusions: let’s be clear that there is no magic bullet; change takes time; and more advantaged children benefit more from interventions.

Jonathan Jansen concludes the volume with “Inequality in Education: What is to be Done?”, citing four factors as the cause of persisting inequality. He first calls out SADTU, the largest teacher union in South Africa. Days lost to strikes are equivalent to the loss of a quarter year of learning in poorer schools, but barely affect rich schools. Second, he laments that government policy has failed to address the chasm between rich and poor schools, giving as examples the lack of cap on parent funding and the failure to redistribute highly skilled teachers to schools where they are most needed. Third, he notes that the lack of adequate planning—of budgets, monitoring, textbook distribution, and infrastructure improvement—is damaging across the country, but particularly so in the poorer provinces. Finally, he points to programmes like curriculum reform, which may work in schools with high teacher capacity but is woefully inappropriate (and sometimes harmful) in weaker schools. Jansen offers a note of caution (in contrast with Taylor’s chapter) for the quest for more and more randomized controlled trials and the risks of the new “evangel” for school reform: the triple neoliberal cocktail of scripted lessons, teacher coaching, and better materials.

Spaull and Jansen skillfully draw people, ideas, and data together in this edited volume to tell a convincing story about the state of inequality in South Africa’s education system. South Africa’s context is, of course, unique. But there are important lessons we can learn from this book that might help us understand more about educational inequality elsewhere.

Firstly, we learn that using administrative data is powerful. South Africa is way ahead of the pack in the production and use of this data. There are few other contexts where phrases like “own analysis of the microdata” appear in the same sentence as “EMIS” (education management information system), or we see notes to tables like “information on poverty quintile was available for 4,615 schools that could be linked across the period [2009-16].” The ability to describe the situation and argue cases using comprehensive data at the national level is vital for policymakers.

Secondly, we see that evidence alone is not enough. South Africa has all the right ingredients for evidence-based policymaking: a rich environment of good data, rigorous research, world-class analysis, participation in several international assessments, and robust and healthy interactions between government, researchers, and practitioners. Yet, it finds these challenges of equitable educational development so intractable. Spaull and Jansen’s volume sheds some light on why, with a thorough exploration of the politics of the system and the processes of policy initiation, negotiation, implementation, maintenance and destruction.

Thirdly, we observe the power of teacher unions in accentuating and reducing inequality. Spaull and Jansen, in their opening and closing chapters, note how instrumental SADTU is to both the dismal status quo and to any possible route to a more equitable schooling system. This is reinforced by a 2016 report by a Ministerial Task Team which found that SADTU is in “de facto control” of six of the nine provincial education departments in the country. Gustafsson’s chapter provides an overview of which policies were supported or resisted by SADTU. All this a stark reminder that unions are often just as integral to education policymaking as the education policymakers themselves.

Fourth and finally, we are reminded of the complexity of strengthening education systems. In this review we cover just a few of the themes that are each a huge challenge for South Africa’s policymakers to grapple with. Together, they must sometimes seem insurmountable. Mohohlwane’s chapter on language demonstrates this well: the evidence on learning in mother tongue in the early grades is highly convincing, yet her account shows how challenging it is to make policy that genuinely equalises outcomes for learners whose mother tongue is not English or Afrikaans. Us northern think tankers should be cautious to proclaim policy solutions from afar!

We congratulate Spaull and Jansen for curating such a thoughtful and data-rich volume by an all-star list of South African contributors. We’ve reviewed just a few chapters here, but we recommend you read them all. While South Africa’s education system has much to do to address the enigma of inequality once and for all, the quality of debate about education in South Africa by South Africans is almost second to none. We at CGD are attempting to play a small part in supporting researchers in other African countries to follow Spaull and Jansen’s lead by supporting the use of good data and production of rigorous research to drive local conversations about education reform and the role education can play in building more equal societies.

We were fortunate to receive a review copy of this book. Unfortunately the price (over $100) is likely to create a tier of potential readers who can read it, and another tier who cannot. We hope that changes.

Africa, Equality of Opportunity and SDG4