Brazil: Another Revolution of Rising Expectations?

“Sorry for the nuisance: we are changing Brazil,” reads the sign carried by a young woman marching down the streets of São Paolo on June 17. 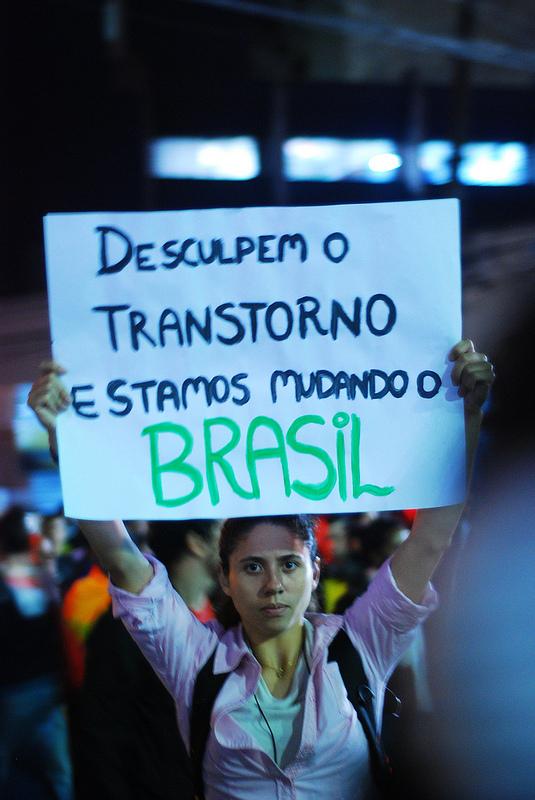 So who is this “we” she refers to? Fellow protestors, certainly. But “we” might also refer to the large, frustrated group of “strugglers” in Brazil—those who are no longer poor—but have income still too low to be part of Brazil’s new middle class. In a revolution of rising expectations they are demanding a better government. Their demands put Brazil’s still-young democracy (the military withdrew less than 30 years ago) at a crossroads. If their evolving needs and demands are met, they will have acted as agents of inclusive growth and change in their society. If their problems are neglected and they lack sufficient schooling, skills, and opportunities, they could become a restive underclass, and likely supporters of populism and civil strife.

On paper, the past two decades have brought significant improvements for Brazilians: Supported by good macroeconomics, median household income has more than doubled while income inequality has decreased. Brazilian President Dilma Rousseff likes to point out that the country has lifted millions of people out of poverty and into the “middle class.”

But now it seems this is not enough. For nearly three weeks, Brazil has experienced the biggest nationwide street protests since the early 1990s, when a frustrated society demanded the impeachment of then-president Collor de Mello. Back in 1992, the reason for the national public outrage was a large corruption scandal and chronically high inflation that eventually turned into hyperinflation. Two decades later, as commentators point out, there is no shortage of reasons why some 1 million or so Brazilians have taken to the streets: corruption, high rates of crime, rising consumer prices, resentment about big public spending on the upcoming soccer World Cup, and—perhaps most importantly—the low quality of public services in infrastructure, health and education.

In a recent presentation at the Inter-American Development Bank (and a forthcoming paper), we argue that the majority of households in Brazil (and other upper-middle income countries in Latin America), is in fact not yet part of the region’s growing and income-secure middle class. They are what we call the vulnerable or the frustrated strugglers, and many of Brazil’s protestors are likely part of this group. They are not “poor” according to their countries’ moderate poverty lines, but they are still at risk of falling into poverty, whether due to a health problem, a natural disaster or an economic downturn. The strugglers have some disposable income, may be employed in the informal sector, pay some taxes, and send their kids to public schools—but the public services they receive for their tax money provide little real benefit to them. They are people like Maria Cândido, a cleaner in São Paulo, who lives on the minimum salary and supports the protests, but can’t join herself because, in addition to a full day’s work, she commutes five hours per day via an overloaded and inefficient urban transport system.

How many Brazilians are part of the struggler group? Using household survey data, we identify this group by their household income: between $4 and $10 per capita per day. For the lower bound, $4 is slightly below the average national poverty line in Latin America. For the upper bound, there is an emerging consensus about $10 per capita per day as a minimum for a person to have the economic security associated with middle-class status in today‘s global economy (see our previous blogs here, here, and the CGD working paper here). 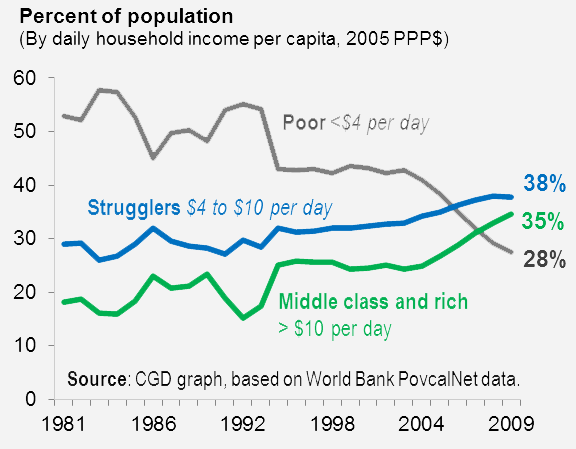 The challenge for Brazil’s government, today and over the coming decades, will be to deliver social and economic policies that further the interests of this large group of vulnerable and poor in a society. That will depend on politics as well as continued growth, in particular whether the income-secure middle class, now 30 percent of the total population and an increasingly powerful political force, sees better public services and a more responsive government in general in its interests—not just in the interests of the poor and strugglers.

Are the current frustrations of the strugglers justified? What is the relationship of the strugglers to the state? Using data from the Commitment to Equity project, our forthcoming paper demonstrates that the strugglers are net payers into the fiscal system. Here’s why: The strugglers benefit only marginally from Brazil’s cash transfer programs, which is mainly targeted at the poor. But like the poor and the richer middle class, the strugglers pay a significant share of their income in value-added taxes. In fact, 10 percent of Brazilians with initial income between $4 and $10 are pushed into the group of the poor because of the high level of indirect taxes. As you can see in the figure below, the strugglers’ only net “benefit” from the system derives from free public schooling and health services. 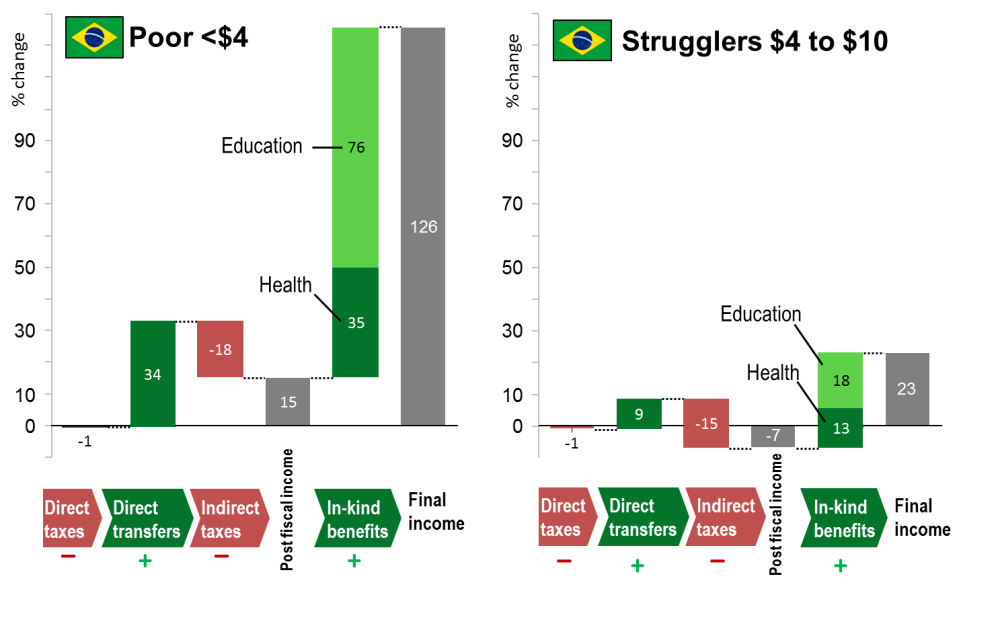 Fiscal incidence of taxes and transfers in Brazil, by income groups -- Source: Birdsall, Lustig and Meyer (forthcoming), based on data from the Commitment to Equity project.

The problem is that these services are inefficient and ineffective. In education, schooling coverage and outcomes have improved, but still remain far below the level of rich countries. Like in most countries of the region, parents are opting out of the public school system, signaling its poor quality by enrolling their children in private schools. In health, Brazil’s large public system is too expensive for what it delivers. Doctors like Ângela Maria Albuquerque, who works in a public hospital in Rio de Janeiro, struggle to provide adequate patient care in light of tight budgets.

As we show in our paper, the income-secure middle class is already abandoning inadequate public services—figuratively if not literally joining the rich in gated communities and private schools, leaving behind the strugglers in a new underclass. Referring to the problem John Paul Rathbone in his FT article cleverly invokes Albert Hirschmann’s choice between “exit and voice”: the strugglers, unable to afford “exit,” are resorting to “voice.”

How to change Brazil? The social contract could develop either way—toward greater robustness, with better public services and a struggler group that acts as an agent of change for sustainable and equitable growth, or toward a society in which the poor and the strugglers are increasingly marginalized, frustrated, and restive.  In a move toward the former outcome, President Rousseff has already made some sensible suggestions.  We think that in Brazil, the pace of political and economic change has a good chance to keep up with rising expectations.  We hope so.

Thanks to Julia Clark and Stephanie Majerowicz for helpful suggestions and clarifications.