Can Governments Purchase Their Way to Greater Gender Equality?

The world of business is still extremely gender-unequal. Across the countries in the World Bank’s enterprise surveys, less than one in five firms are run by a woman, for example. Governments could help fix that problem by using their immense purchasing power (close on $10 trillion a year in procurements) to foster the growth of women-owned enterprises. But at the moment—at least in the US—the government is a laggard rather than a leader when it comes to awarding contracts to women owned business. It’s time for that to change.

That is grounds for congratulations (sort of) because the proportion of small business awards won by women-owned businesses is up from 14 percent in 2005. And the 2015 results means the US government has finally met the goal set in the 1994 Federal Acquisition Streamlining Act that 5 percent of small business eligible contracts went to women-owned firms. People born in the year the goal was set can now legally buy champagne to celebrate its achievement.

But before they pop the cork, members of the Bieber generation might want to reflect on the fact that women-owned firms are still under-represented even compared to their low share of the overall market-place. About one in four small businesses registered to contract with the US government are women-owned compared to their one-in-five share of small business contracts awarded. And accounting for a number of firm features including the age and size of the business, Department of Commerce analysis suggests the odds of a women-owned business winning a contract is roughly 21 percent lower than other businesses.

Looking at the performance of individual US government agencies, some appear to be doing a lot better than others in terms of increasing equality in contracting outcomes. The figure below looks at the 10 largest contracting agencies in 2015 and compares women-owned share of small business awards in 2005 to 2015. Most agencies cluster at the intersection of the average scores for the two years—14 percent in 2005 and 20 percent in 2015.

Figure 1: Women-Owned Share of Small Business Awards in the US Federal Government 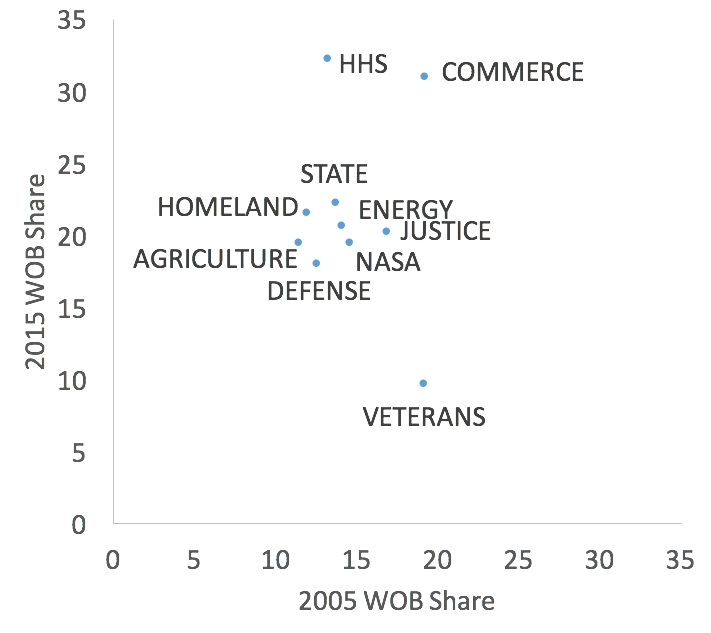 That suggests that it is possible for governments to make rapid progress in terms of making marketplaces more gender-equal. And policies can help: the US Congress recently passed the Women’s Small Business Procurement Parity Act, for example, which gave those businesses opportunities to bid on sole-source contracts on advantageous terms offered to other targeted business groups like veteran-owned firms.

International organizations might want to support similar efforts—or at least not stand in their way. The World Bank already allows countries to give advantages to locally owned firms in procurement decisions, for example. Perhaps it could allow or encourage procurement officers in client countries to give advantages to women-owned firms, as well. There is a long way to go to ensure gender equality in the marketplace, and governments and international organizations should be leading progress, not dragging behind.