Chart of the Week #1: Is the Elephant Graph Flattening Out? | Center for Global Development | Ideas to Action Skip to main content

Chart of the Week #1: Is the Elephant Graph Flattening Out?

The World Inequality Report updates and extends the famous elephant curve, showing slower gains for much of the globe, and even more concentration of economic growth in the top 1 percent.

The "elephant graph" created by Christoph Lakner and Branko Milanovic in a 2013 World Bank paper has become perhaps the most talked-about chart in international economics over the past few years. The simple graph shows income gains at each point of the global income distribution for the 20 years spanning the fall of the Berlin wall to the 2008 financial crisis. China and India's rapid growth constitute the bulk of the elephant, driving down global inequality, while the global 1 percent lift the elephant's trunk, and in between the losers from globalization saw zero income growth—a feature frequently cited by pundits to explain the advent of Trump and Brexit.

The elephant graph is almost five years old now, so it's time for a refresh. Brace yourself. It's not good news.

In December, the team of economists from Berkeley and the Paris School of Economics who have pioneered the study of top incomes—including Facundo Alvaredo, Lucas Chancel, Thomas Piketty, Emmanuel Saez, and Gabriel Zucman—launched the first World Inequality Report (WIR). Compiling all existing household survey sources with their own research on top incomes, they were able to extend the time period covered, and found a somewhat different picture: 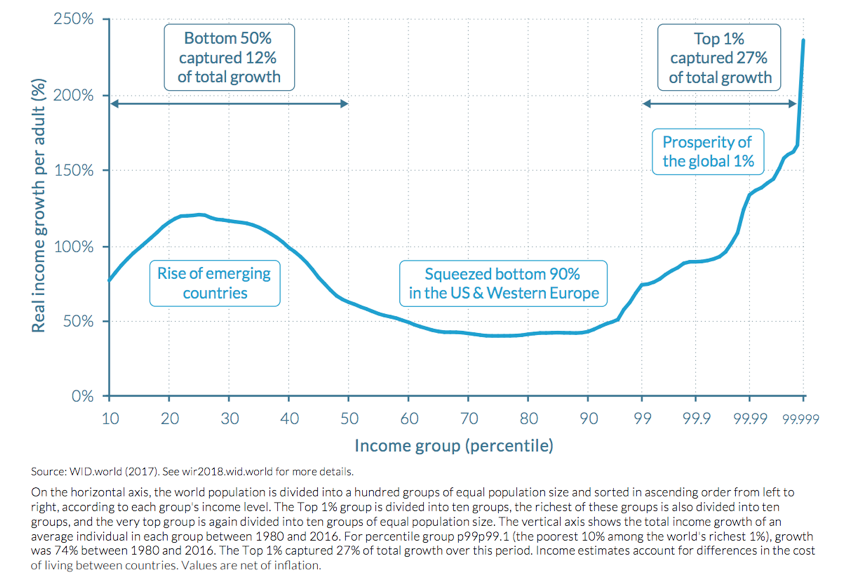 A few things stand out from this new graph:

Is that last discrepancy a function of the different time periods, or something else? It seems to be something else. I downloaded the replication files from the World Inequality Report, made sure I could perfectly reproduce the main elephant curve above, and then simply changed the start and end dates to limit them to 1988 to 2008 a la Lakner and Milanovic (instead of 1980 to 2016 in the new version). The result is still wildly different from the original elephant. 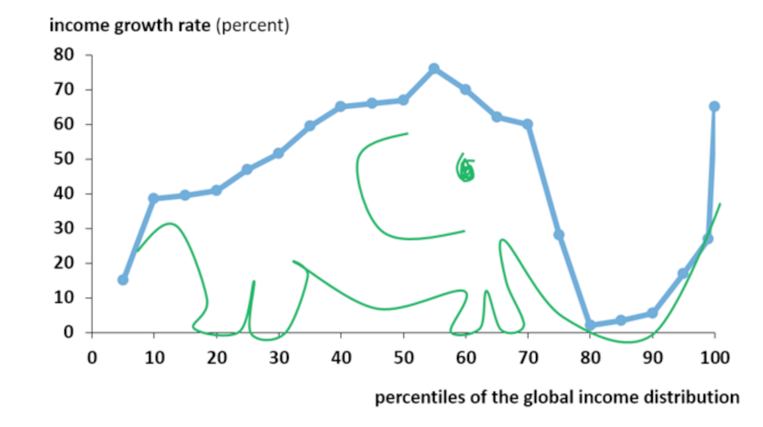 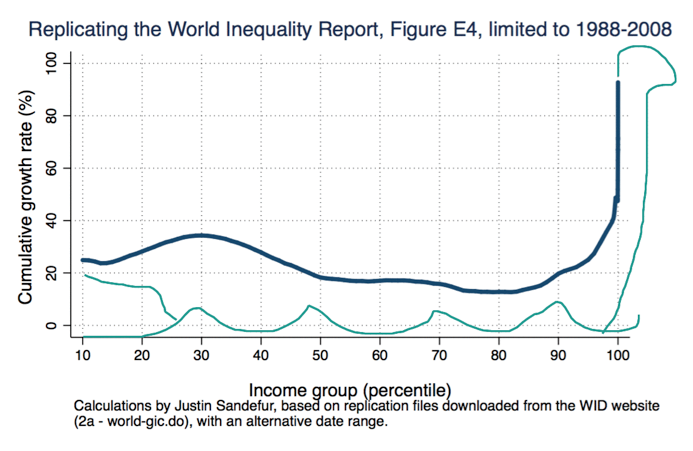 These are very different animals. The elephant has drowned! To be honest, I'm really not sure what's going on.

I suspect much of this discrepancy has to do with methodological differences, particularly in how the WIR team has tried to reconcile survey estimates to economic growth rates from national accounts. But the discrepancies are big and probably demand further explanation, given the inordinate popular attention that the original elephant graph received. A couple basic facts remain robust though: after a period of growing global inequality in the mid-20th century, incomes around the world are now converging with the rise of large developing countries, and—lest we feel too complacent—that equalizing force is partially offset by breakaway growth for a tiny global elite.

Thanks to Facundo Alvaredo and Branko Milanovic for helpful clarifications by email. And kudos to both research teams for posting replication files online. All the interpretations and any errors here in the calculations are obviously mine alone.