Virtually all countries in the world have responded to the COVID-19 crisis by implementing fiscal and monetary measures, significantly larger in relation to national output than those employed during the 2008 financial crisis. The magnitude of fiscal measures to counter the shock varies across developing and advanced economies. As of early April 2020, their value ranges between 1 to 2 percent of GDP (India, Mexico, and South Africa) to over 30 percent of GDP (Germany and Italy). While countries plan to increase health sector allocations by up to 0.3 percent of GDP, more measures are likely as countries fully internalize the economic and social cost of the COVID-19 crisis. However, there are ways to create additional budgetary space for health in developing countries at this time of crisis. In this blog post, we outline these measures, and argue that they should be adopted as soon as possible. Our proposals are additional to resource transfers from international financial institutions, including debt relief, and increased prioritization of health in budgets, which are both essential.

One thing is sure: the crisis has sparked a rethink about existing budget allocations across sectors and within the health sector. The pandemic is forcing countries to reprogram existing expenditures towards the health care response. The speed with which a country can do so depends on systems that define rules and regulations for budget allocation and spending—the public financial management (PFM) system.

In Australia, France, and the Netherlands, for example, PFM rules are adaptable and funds can be reprogrammed rapidly, mostly supported by diverse forms of program-based budgeting. Budgets formulated by programs—that is, a pool of resources grouped around a policy goal—make it easier to rapidly reallocate the budget outlays towards the needed response than budgets based on line-item inputs. In addition, they have been able to fast-track authorization process to allow rapid release of funds to health service providers. In this way, these countries have been able to maximize budgetary space for health in their response to the crisis.

In the past, PFM was often overlooked in discussions around the availability of resources for the health sector. This was, in part, due to the way policymakers and health experts viewed budgetary space for health and PFM. Both concepts were treated as distinct disciplines with separate communities of experts exploring ideas within their own spheres. Those focused on budgetary space concentrated on the importance of additional revenues for supporting higher health spending; public finance management experts in turn focused on reforms needed in expenditure systems and policies.

Figure 1. Links between PFM and budgetary space for health 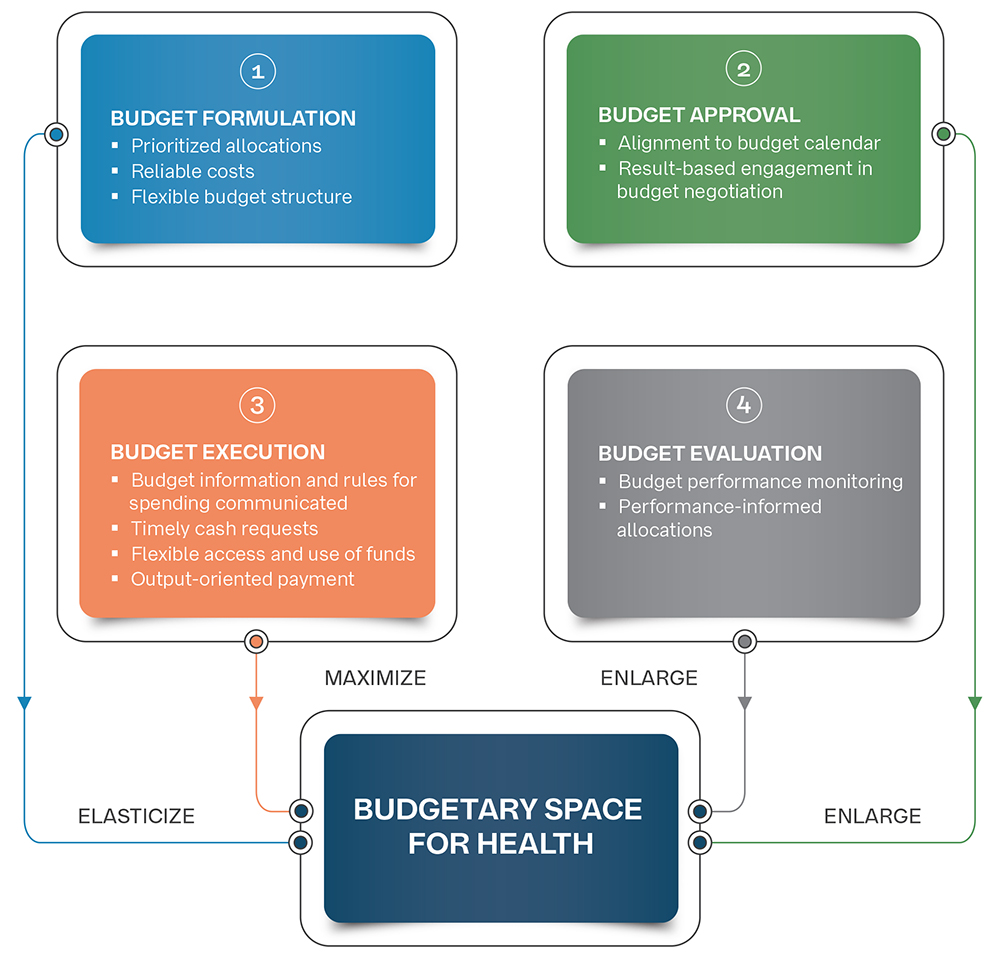 A simple application is related to budget execution. Developing countries are chronically unable to fully spend their budget allocations because of rigidities in their PFM systems, including how budgets are structured and appropriated in the health sector. This is evident from their budget execution rates in health that have averaged below 80 percent during 2008-2016 in African countries. PFM systems have often blocked the full utilization of funds by health service providers (e.g. issue of access to cash, problem with re-allocations across budget lines). Developing country government budgets provide relatively little on health—an average of between 1 and 2 percent of GDP—and more than 20 percent of this allocation is not utilized! Improving spending procedures up to the frontlines and ultimately budget execution rates in health could increase budgetary space for health by 0.5 percent of GDP in developing countries. Unpacking the root causes of under-spending in health is now more than ever a priority for health and finance authorities to urgently expand budgetary space for health.

Looking ahead: Adaptability in PFM systems

The crisis has accentuated the need to reshape our PFM framework to ensure it is not a constraint for enlarging budgetary space for the sector, specifically when an urgent need arises to front-load funds. PFM should be designed to secure funding for rapid action. This means refocusing PFM systems from control to support, from compliance to adaptability, to foster effective spending in the health sector.

Adaptability should now be a leading criterion for assessing PFM systems, specifically the parts applicable to the sector. PFM adaptability is an attribute to system resilience as it will enable fast re-programming and fuller execution of health budgets.

The PFM framework as applicable to health should be refined to:

As most of the above-mentioned PFM reforms have been partially implemented in health, the post-COVID world requires health and finance authorities to work together to accelerate reform implementation and make PFM systems more adaptable and tailored to respond to health and other shocks. This way, PFM systems would be able to meet the needs of the populations they were designed to serve and better leverage the resources of the state, under times of crisis.

Hélène Barroy is a senior health financing specialist at the World Health Organization.