The recent COVID-19 pandemic has come at overwhelming health and economic costs to Latin America. Some countries in the region have been at the top in the rankings of COVID-19’s infections and deaths for months, and the IMF projects an economic downturn of 8.1 percent in 2020. It is to be expected that this accumulation of negative shocks will translate into an increase in poverty and inequality, but what order of magnitude are we talking about? Which income group is being most affected? To what extent have mitigation measures been able to contain the impact?

To answer these questions, we use household surveys to simulate the distributional consequences of COVID-19-induced lockdown policies in the four largest countries in Latin America: Argentina (urban areas), Brazil, Colombia, and Mexico. We begin by identifying individuals whose income is “at risk” because they work in sectors in which the lockdowns have reduced or eliminated activity and we aggregate this at-risk income to the household level. We then simulate income losses using two parameters: i) the share of households with at-risk income that lose income and ii) the share of at-risk income lost by those who lose income. The parameters range from zero to 100 percent (in 10 percent intervals). For example, 60 percent of households lose 50 percent of their income. For macroeconomic consistency, we choose a combination of the two parameters that yields a decline in per capita income closest to the IMF World Economic Outlook forecast for each country from June 2020. Even here, there are multiple possibilities of which we present two extremes, one in which a smaller proportion of households lose a large share of their at-risk income and another in which a larger proportion of households lose a relatively smaller share of income. We call these “concentrated losses” and “dispersed losses.

Our estimates of the poverty consequences of COVID-19 suggest that the number of poor people for the four biggest Latin American countries could increase by more than 25 million (using national poverty lines). Our estimates are worse than many others’ projections because other exercises assume that all individuals lose the same in proportional terms, and the income distribution remains the same after the COVID-19. This assumption is inaccurate in the current crisis. Our estimates suggest that the Gini coefficient (the most used indicator to measure inequality) could increase between 2 and 4 percentage points. Our results suggest that the worst effects may not be on the poorest, but on the moderate poor and those vulnerable to falling below the poverty line if subject to an adverse shock. This is because the very poorest have an income floor composed of the cash transfers that protects a substantial share of their income. This result does not downplay the negative effect of the economic crisis on poor households. Even if poorer households lose less in relative terms, the impact on living standards could be devastating, especially for the extreme poor.

The Impact of COVID-19 Lockdowns and Expanded Social Assistance on Inequality, Poverty and Mobility in Argentina, Brazil, Colombia and Mexico 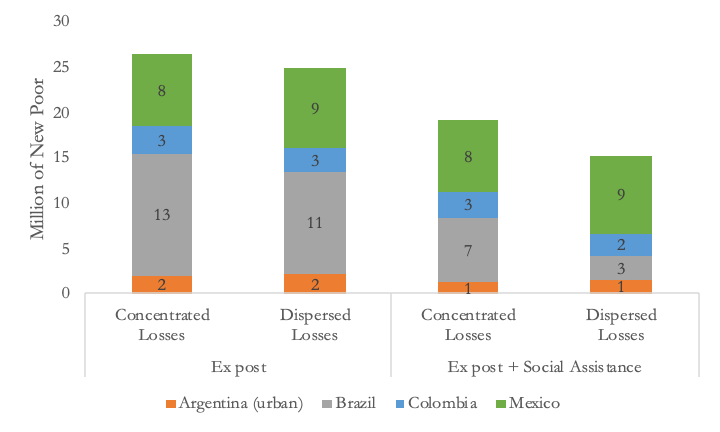 Our exercise has some important caveats. The microsimulations do not consider behavioral responses or general equilibrium effects, so they yield first-order effects only. The crisis’s depth and duration are yet uncertain and the economies could end up contracting by more (or less) than the IMF projections.

Still, the coronavirus crisis's impact on poverty and inequality is critical and may be higher than our results show. Efforts should concentrate then on offsetting the adverse effects on those suffering the worst part of the crisis.