David Roodman is a former CGD Senior Fellow now working as an independent consultant. Learn more about his work at davidroodman.com.

Not to be melodramatic, but the official system for counting foreign aid is in crisis. The longstanding mathematical rule determining whether a loan’s interest rate is low enough to qualify it as aid has gone out of sync with the times. The rule’s benchmark interest rate of 10% per year was reasonable when adopted in 1972, but not now. Today, wealthy governments can borrow below 3%, lend a couple percent higher, come in well under the 10% bar, and count the potentially profitable lending as aid.

Some countries—notably France and Germany—started doing that much more after the financial crisis brought interest rates low in 2008. Others have grown alarmed at the practice. Richard Manning once chaired the Development Assistance Committee that oversees the tabulation of aid (Official Development Assistance, or ODA); in the Financial Times last year, he characterized the Franco-German practice as “get[ting] away with murder.” At this writing, the donors who govern the DAC are in open, if circumspect, disagreement  about when a loan should count as aid. As a result, different donors are counting their aid by different rules. That cannot stand.

Manning’s successor, J. Brian Atwood, recognized the threat to the credibility of ODA statistics. In 2011–12, he pressed the DAC members to confront and heal the rupture. The drama played out behind closed doors, climaxing (at least for now) at a December 2012 ministerial meeting in London. France and Germany rejected proposals to abandon the 10% benchmark in favor of more realistic benchmark interest rates. The donors managed only to agree to disagree, to promise a bit more transparency on the disagreement, and to instruct the DAC staff to study the issue with an eye toward resolution by 2015.

After 18 months of consultation and analysis, the staff are returning to the Committee with issues and options. The next six months will be critical in determining how the conflict is resolved, and how the concept of foreign assistance evolves in year to come. The integrity and credibility of ODA as a statistical concept hang in the balance.

In a new CGD policy paper, I analyze the loan issue, develop proposals, and simulate their effects on donors’ aid totals. I take positions on other questions that have arisen in recent years in discussions of the definition of ODA, such as whether private charity should count as aid—more on that in a later post. And I created a “what if” spreadsheet tool that that lets you see how definitional changes would affect donors’ aid totals. (Requires Excel. After downloading, click “Yes” or “Enable content” at any warnings, which are caused by code embedded in the spreadsheet.) Finally, a Tableau dashboard presents data on disbursements of loans whose inclusion in ODA is at stake.

I’ll devote the rest of this post to the issue that brought us here. I estimate that $9 billion in lending counted as ODA in 2012 would not have been under lower and more realistic benchmark interest rates--$4.6 billion from Japan, $3.0 billion from France, and $1.3 billion from Germany.

France and Germany’s public defense of counting potentially profitable loans as aid boils down to this: Yes, when Germany can borrow long-term at 3%, and make a $144 million loan to China for railroad construction charging 4.85%, that might not look like aid. But once you factor in the cost of administering the loan and the probability of default, Germany will on average lose money on such loans.

The argument is smart. But I side against it. My reasons:

I propose an interesting exception, however: when deciding whether a loan is costly enough to count as aid, donors should be allowed to factor in the risk of default if the loan contract substantially embraces that risk. For example, the loan terms would eschew late fees and higher interest in the event of default. Payments could be automatically reduced if prices of the borrower’s key commodity exports fell, as proposed by Pierre Jacquet, Daniel Cohen, and Helmut Reisen. Or the contract could promise arbitration in a bankruptcy court–like Sovereign Debt Restructuring Mechanism, an idea mooted by the IMF’s Anne Krueger in 2002, and recently revived by Brookings and the IMF.

Such loans hardly exist now. Embedding a reward for them in the definition of ODA could make them common, helping to prevent debt crises in poor countries.

In addition to shifting incentives, changing the definition of ODA shifts donors’ aid totals. The table below shows the consequences of just one change, the same as in the Tableau graphs: instead of benchmarking loans against the archaic 10% rate, benchmark against the OECD’s Differentiated Discount Rates. DDRs reflect current borrowing conditions for donor governments and include a 1% spread for administration. Currently they are around 3–4% for the European Union, Japan, the UK, and the US. (Technical note: this change retains the DAC’s requirement of at least a 25% grant element.) 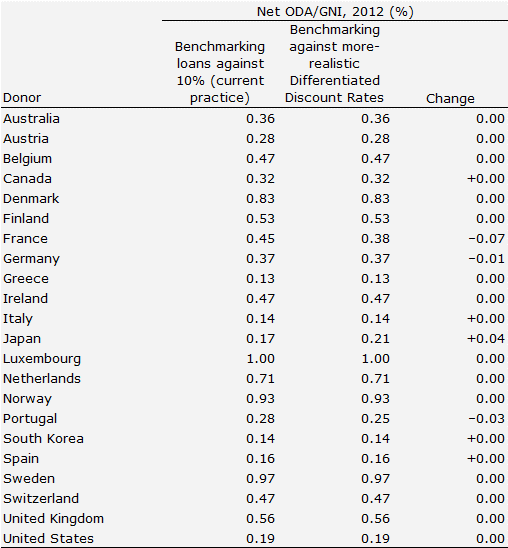 Most donors are hardly affected by the change because they do little aid lending. France’s total would fall because much of its current lending hardly looks aid-like when the interest rates France charges are compared to the interest rates France pays when it borrows on the bond market. Yet Japan, which also does a lot of aid lending, would gain. Why? It too would see much of its current lending excluded from ODA. But many loans that Japan made years ago would also be expelled from the ODA realm, and the repayments that Japan is now receiving on those loans would no longer be subtracted from its current ODA total. For Germany, these two effects about cancel out.

My hope is that the combination of modest impacts for most donors, the splintering of the major ODA lenders into winners and losers, and the need to restore the integrity of ODA measurement will make the sort of change modelled above politically realistic. For sure though, France won’t concede without a fight.

If the DAC fails to agree by next year on a credible fix for the current inconsistencies, then I expect that outsiders will rise up to run the numbers in ways that make more economic sense, threatening the DAC’s reputation as the authority on ODA.