Diaries from the Frontline: Distance Learning for Offline Children | Center for Global Development | Ideas to Action Skip to main content

Diaries from the Frontline: Distance Learning for Offline Children

by
Maryam Akmal
,
Marriam Musa
and
Maretta Silverman
May 21, 2020 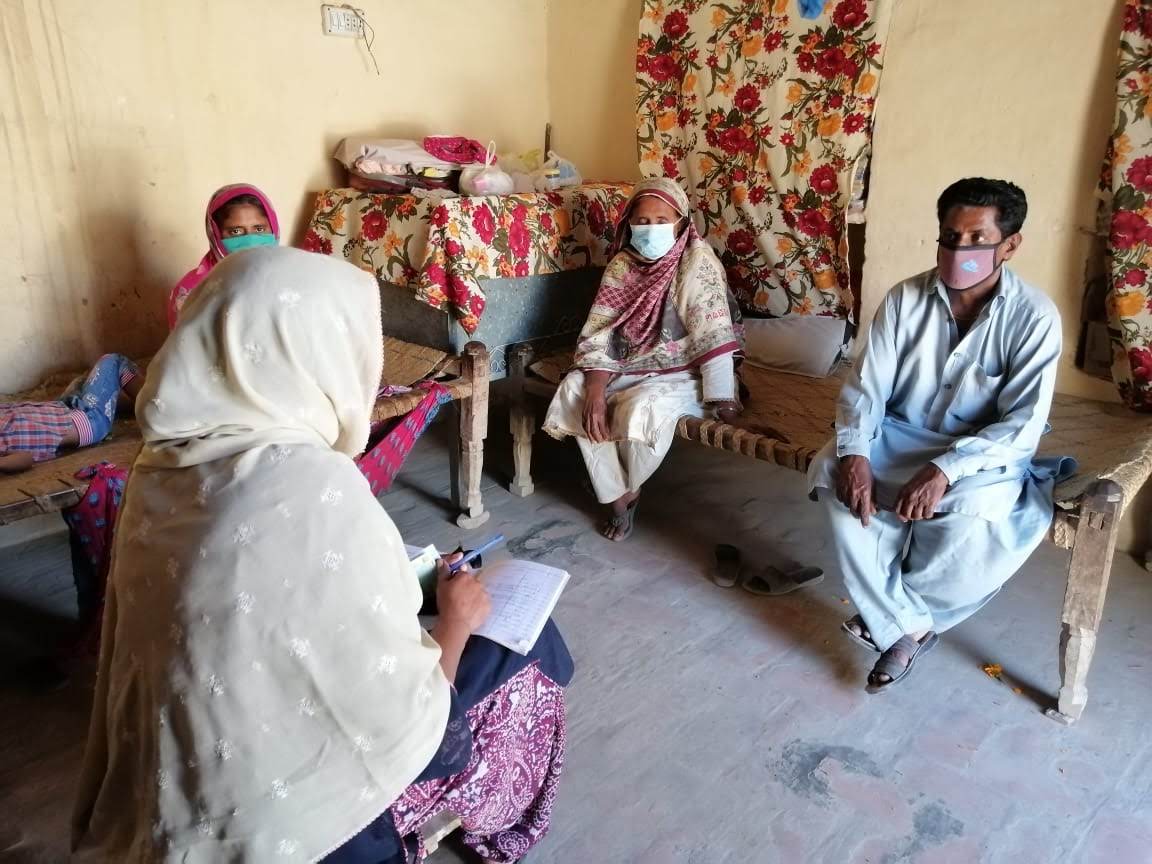 With schools out, countries around the world are grappling with distance learning initiatives to keep kids learning and engaged. Distance learning is a big challenge in low-tech environments where children have minimal access to digital media, though many digitally advanced countries are struggling as well. According to CGD’s COVID education policy tracker, only 29 percent of low-income countries are providing some kind of distance learning program for their students. But even in low-income countries that do have distance learning programs, many students might be left out due to poor access to the TV, radio, or internet. For example, a new survey from Kenya suggests that only one in five children are accessing online learning during school closures. In addition, language of content, access to books at home, and parental literacy and involvement can further exacerbate inequalities.

In the second post in our “Diaries from the Frontline” series, we continue to examine how frontline education organizations are adjusting to the crisis. Last week we took a look at how The Citizens Foundation (TCF), which operates more than 1,600 primary and secondary schools in urban slums and rural communities in Pakistan, and the Luminos Fund, which provides accelerated learning for children who have missed out on school due to poverty, crisis, or discrimination in countries including Liberia, shifted to providing food and relief to families. In this post, we examine how TCF and Luminos are supporting distance learning efforts for the students they serve.

Less than a month after Pakistan closed schools, the prime minister announced a new state television channel dedicated to lessons aligned with the national curriculum, PTV TeleSchool. It was the first time in decades that Pakistan had a local language children’s TV channel. Television was a natural choice. Roughly two-thirds of households in Pakistan own a television set. In contrast, the percent of households that have a radio and internet connection are 6.4 percent and 11.8 percent respectively. While TCF has found its teachers taking the initiative to use a variety of media, including WhatsApp, SMS, and word-of-mouth to ensure the continuity of learning in communities it serves, television stands out as a medium to reach and engage a large number of children from schools throughout the country.

Now came the harder question: how do you get school from a TV? For TCF, the answer was simple: You don’t. Lessons from education response efforts in West Africa after the Ebola crisis emphasize that education’s primary role during a crisis should be that of positive engagement, mitigating psychosocial impacts of the disaster, and establishing routine—not just ensuring the continuity of academic learning.

In response to the government’s call for academic content for the TV channel, TCF adapted its play-based curriculum for a new filmed-at-home-but-made-for-television show, Ilm Ka Aangan (The Courtyard of Knowledge). The content focuses on building functional literacy and numeracy through engaging activities, with a key focus on socio-emotional learning.

The show uses storytelling, which can be an effective way to not only cultivate literacy and social skills, but also explain concepts from science and social studies while keeping kids engaged. For example, the story “Emaan the Scientist” is about a little girl who wants to fly, and illustrates the scientific method. After several failed attempts, her mother reassures her that if she keeps experimenting, as scientists do, then someday she will fly. Eventually, she does, with a hot air balloon. The protagonist, along with the show’s host, also offer positive role models for little girls watching. Despite the effectiveness of storytelling, only 3.5 percent of kids in Punjab have 3 or more books to read at home.

Recognizing that children of many ages are watching at once, the show’s content is multi-grade with a focus on basic concepts targeted at ages 5-10. This is in contrast to other distance learning content being aired in Pakistan right now that is structured in a grade-wise manner—despite the fact that many students are already behind their grade level. Data from the Annual Status of Education Report suggest 75 percent of grade 3 children in urban Pakistan cannot read a simple story in their local language at the grade 2 level.

The learning doesn’t stop once the show ends. The host assigns “homework,” for example playing a game to learn a concept or solving a math problem. However, the most popular homework is the host asking children to submit a drawing based on the episode.

The day after the launch, the show received 20,000 text messages from a wide range of urban and rural areas, a response that has fed into how the program is evolving. Since the most marginalized children will not have access to TV, mobile phones, or electricity, including most of the communities that TCF serves, the organization is also piloting a purely offline version of Ilm ka Aangan: an edutainment magazine focused on building early grade skills through do-it-yourself activities, stories, and comics, which can be exchanged with teachers via drop-off points, such as grocery stores. Anticipating that school closures may be extended, TCF is designing similar magazines for secondary school students. For now, Ilm Ka Aangan, through television and the offline magazine, seems to be providing much needed engagement, learning, and a sense of routine for millions of children stuck at home.

The Luminos Fund’s Efforts to Support Learning at Home

After schools closed in Liberia, the government launched a radio schooling initiative. Unlike Pakistan, Liberia has a relatively higher rate of radio penetration and lower rate of TV access. Roughly half of households possess a radio, whereas roughly one-fifth possess a television and approximately one-tenth of the population has access to electricity. However, that means that while radio schooling is more scalable, half of Liberian households still may not have access. And even among those households with access to a radio, children might not have access to learning materials such as books and stationery.

Luminos has sought to provide access to some of those learning materials. In late March and early May, Luminos distributed learning materials to hundreds of Liberian students for home-based learning, including readers, math workbooks, pencils, and pencil sharpeners, as a part of relief packages that also included soap and detergent for students’ families. Through this process, Luminos facilitators found that in most cases, the materials they provided are the only books the family has.

Figure 2. A student in Liberia receives her learning material to continue studying at home 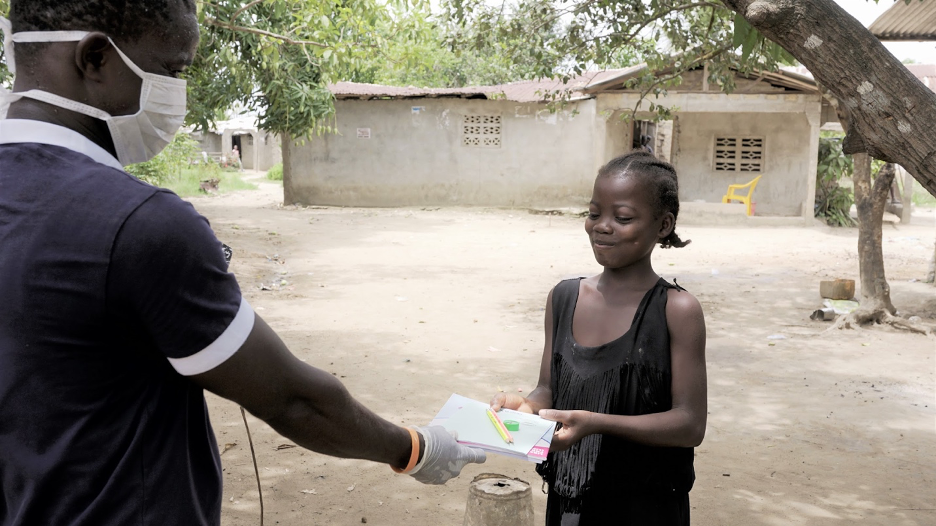 “Radio or texting might work elsewhere,” says Abba Karnga, Jr., Luminos program manager for Liberia, “but not where we work. Most of our parents don’t have radios, and kids shouldn’t gather around one anyway due to distancing. If we sent a text, many of our parents couldn’t read it. The best thing Luminos can do is distribute the readers, worksheets – learning materials – for students to work on at home, speak to the families, and then for our facilitators or supervisors do their best to monitor.”

Apart from providing textbooks, Luminos Fund facilitators have tried to stay engaged with students and ensure that they are using the learning materials. Varney, a facilitator who lives and teaches in a rural village in Bomi, walks by students’ houses—at a distance—to tell them the lesson for that day and to ensure that children are using the books. Then, that afternoon or the next day, he checks to make sure they have completed it.

One father, who is literate, says of the Luminos reading materials, "My daughter can read the whole book now. Even last night she was working on it."

The initiative has had challenges. First, not all facilitators are able to check in with their students, especially those who live in faraway villages. Second, distributing materials in remote communities is time-consuming and can be stressful when local community members are suspicious of visitors wearing medical masks and personal protective equipment, especially due to heightened distrust of others from experience with Ebola.

Despite these efforts to promote distance learning, facilitators and parents have expressed concerns that students will fall behind, especially students who were struggling already. For now, everyone is worried about what will happen to this particular cohort of students, and eager for the virus to pass so schools can reopen and life can return to normal.

Next week we’ll take a look at what TCF and Luminos teachers are doing and how operations are being sustained during the crisis.