Read the paper
by
Pamela Jakiela
and
Owen Ozier
October 27, 2020 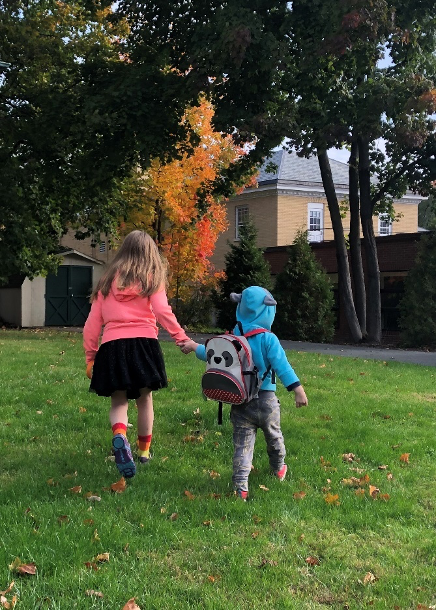 In almost all human societies, older children help their parents care for younger siblings. In OECD countries, this assistance is typically confined to watching out for younger children in the backyard or on the playground, playing with them, and occasionally helping them with snacks, electronic devices, and other “needs” that might normally require assistance from an adult. But our society is WEIRD, as Harvard anthropologist Joseph Henrich has observed, and WEIRD countries—Western Educated Industrialized Rich Democracies—are not necessarily representative of the human experience. Older siblings—particularly sisters—play a much larger role in caring for young children in many low- and middle-income country (LMIC) contexts, particularly in rural areas and among households engaged in subsistence agriculture and other forms of domestic production (as anthropologists Sarah Hrdy and David Lancy describe in their excellent—and compellingly readable—books Mothers and Others and The Anthropology of Childhood). Because “alloparents”—individuals such as grandparents or older siblings who help raise children other than their offspring—are so important in such contexts, and because older sisters tend to do more of such “sibcare” than older brothers, anthropologists have long been aware of the potential for a sister effect. The most extreme effects are dramatic: for example, in the Gambia in the mid-20th century, the presence of an older sister made subsequent children more likely to survive. In fact, the importance of sisters as alloparents is so widely acknowledged that a well-known anthropologist who saw me present an early version of our economic research on big sisters said something to the effect of “it may well be true, but it’s a bit anthro 101.”

In spite of this, the role that older sisters play in childrearing is often ignored in research and policy discussions of early childhood—even as donors, governments, and researchers invest more and more in programs intended to improve parenting practices, encourage households to invest in their young children, and boost health, nutrition, and cognitive development outcomes for the 250 million children in LMICs who are at risk of failing to meet their developmental potential. Widely used survey measures of early childhood stimulation—for example, the Family Care Indicators questionnaire included in UNICEF’s Multiple Indicator Cluster Surveys—capture the extent to which adults engage in stimulating activities (such as reading, singing, or physical play) with three- and four-year-olds; but the Multiple Indicator Cluster Surveys doesn’t even record stimulating activities undertaken by siblings under age 15. Most impact evaluations also ignore the potential impact of early childhood development interventions on older children. In ongoing work with David K. Evans and Heather Knauer, one of us (Pam) finds that only four of 475 impact evaluations of early childhood development interventions in LMICs measure spillover effects on children in middle childhood or adolescence.

However, the few impact evaluations that look for such spillovers often find them. For example, Sebastian Martinez, Sophie Naudeau, and Vitor Pereira found that building community preschools in Madagascar improved educational outcomes for older siblings, while Marcella Alsan found that a vaccination campaign in Turkey improved literacy among older sisters. In earlier work, one of us (Owen) found that a “deworming” program that provided free medication to treat intestinal parasites to all primary school children had positive spillovers on the cognitive development of babies under the age of two, and that the effect was strongest among children who had older sisters in primary school (receiving the deworming treatment). These empirical patterns can be explained by the special relationship between older sisters and young children in many LMIC contexts—older sisters do much of the childcare while mothers are busy with farming, paid work, and other household tasks.

In our new paper with Lia C. H. Fernald and Heather Knauer—“Big Sisters”—we model these tradeoffs, attempting to incorporate some of anthropologists’ insights about sibling alloparents into standard economic models of investment in early childhood. To test the predictions of our model, we use data from the baseline survey of an ongoing early literacy intervention in rural Kenya to estimate the “impact” of having a big sister rather than a big brother (restricting attention to the quarter of our sample that has exactly one older school-aged child at home). We find that young children with an older sister (as opposed to an older brother) score about 0.12 standard deviations higher on an age-adjusted index of early childhood development. For comparison, this “effect” of having a big sister is about as large as the difference in child development between young children whose mother completed secondary school and those whose mother only completed primary school. We observe treatment effects of big sisters on both vocabulary and fine motor skills, and impacts seem to be concentrated in the lower half of the distribution (of child development outcomes). We can’t say precisely why these patterns occur, but detailed data on early childhood stimulation activities undertaken by both parents and other household members provide some clues. For one thing, we can see that older sisters do more stimulating activities with their younger siblings than anyone else in the household, even averaging across households where there is no older sister present (see figure below). 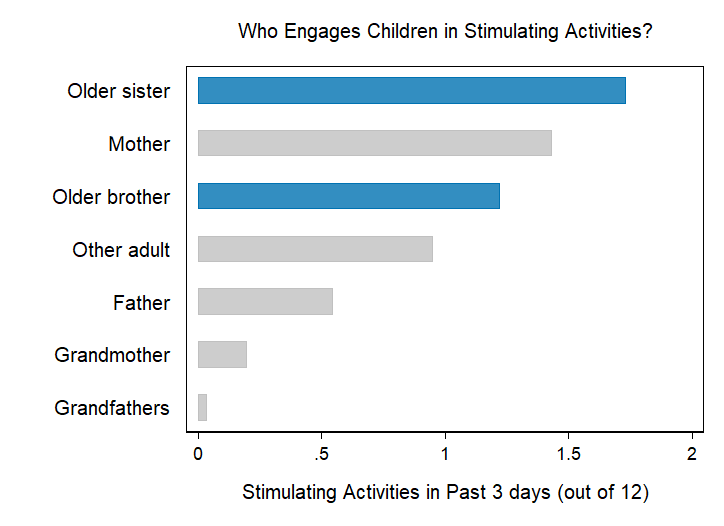 The figure shows the mean number of stimulating activities young children experienced, disaggregated according to which household member engaged in the stimulating activity with the young child. Early childhood stimulation is measured using an adapted version of the Family Care Indicators questionnaire.

Digging into the patterns, we can rule out the possibility that the effect of having a big sister is driven by differences in parental behavior, since parents do not measurably change their behavior towards the youngest children in response to whether the young child has an older sister or brother. This suggests that the effect we observe is not driven by greater parental investment in young children (which we might expect if parents were investing less in their older girls than in their older boys). Instead, the impacts we find seem to be driven by the behaviors of the older siblings and not the parents. We see clear evidence that older sisters engage in more stimulating activities with their younger siblings than older brothers do. It appears that these stimulating activities have an impact on young children’s development. 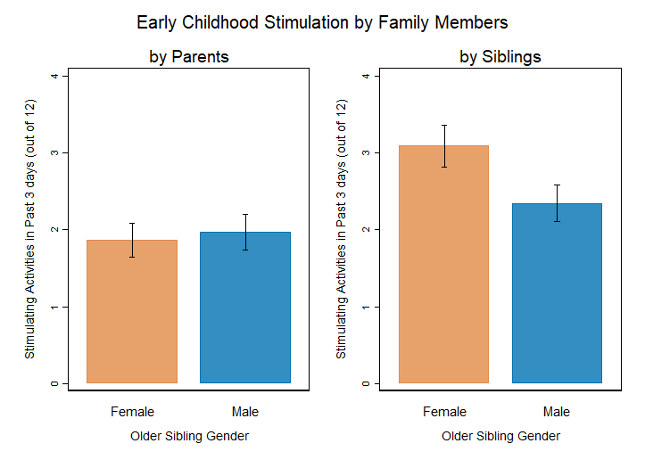 Greater “parenting” effort by older sisters entails an opportunity cost; for older girls, spending more time looking after younger sibling likely leaves less time available for schoolwork and play. This may be one (benevolent) reason that researchers and policymakers sometimes ignore big sisters’ role in caring for young children: as older girls spend more time in school and governments expand access to daycare and preprimary education, sibling childcare may become a thing of the past. And perhaps it should. However, in the here and now, the empirical evidence suggests that households are counting on help from older siblings, and that older children’s investments in their younger sibs can have important developmental consequences. As Javaeria Qureshi found, improving education for older sisters has benefits for younger siblings. And as Alsan and Martinez, Naudeau, and Pereira found, improving circumstances for younger siblings (via health interventions or preschools) yields educational benefits for older sisters. Household members (and anthropologists) around the world know that big sisters’ and little siblings’ health and education outcomes may be intertwined, so that intervening for one may have repercussions for the other. Policymakers should know it too.