Forests and Poverty: Barking Up the Wrong Tree? | Center for Global Development | Ideas to Action Skip to main content

Forests and Poverty: Barking Up the Wrong Tree?

Most discussions of the linkage between forests and poverty—including one last week at the United Nations Forum on Forests (UNFF)—focus on how to increase income to poor households from the harvest and sale of forest products. But at least as much attention should be paid to forest destruction as a pathway to the further immiseration of poor people. As forests are destroyed, poor people often lose access to the forest goods and services they depend on. And because deforestation contributes to the emissions that cause climate change, forest destruction impacts the development prospects of poor countries as well.

Can forests provide pathways out of poverty?

On May 2, I participated on one of several panels at the UNFF12 meeting in New York on the relationship between forests and selected Sustainable Development Goals (SDGs). The UNFF is a subsidiary body of the United Nations, established in 2000 to promote “. . . the management, conservation, and sustainable development of all types of forests and to strengthen long-term political commitment to this end.”

It’s great that UNFF is focusing on the linkages between forests and the SDGs; as I wrote two years ago in a blog about SDG15 (the one that includes forests), the many contributions of forests to objectives such as food, water, and energy security (depicted in Figure 1) are inadequately reflected in the SDG targets overall. 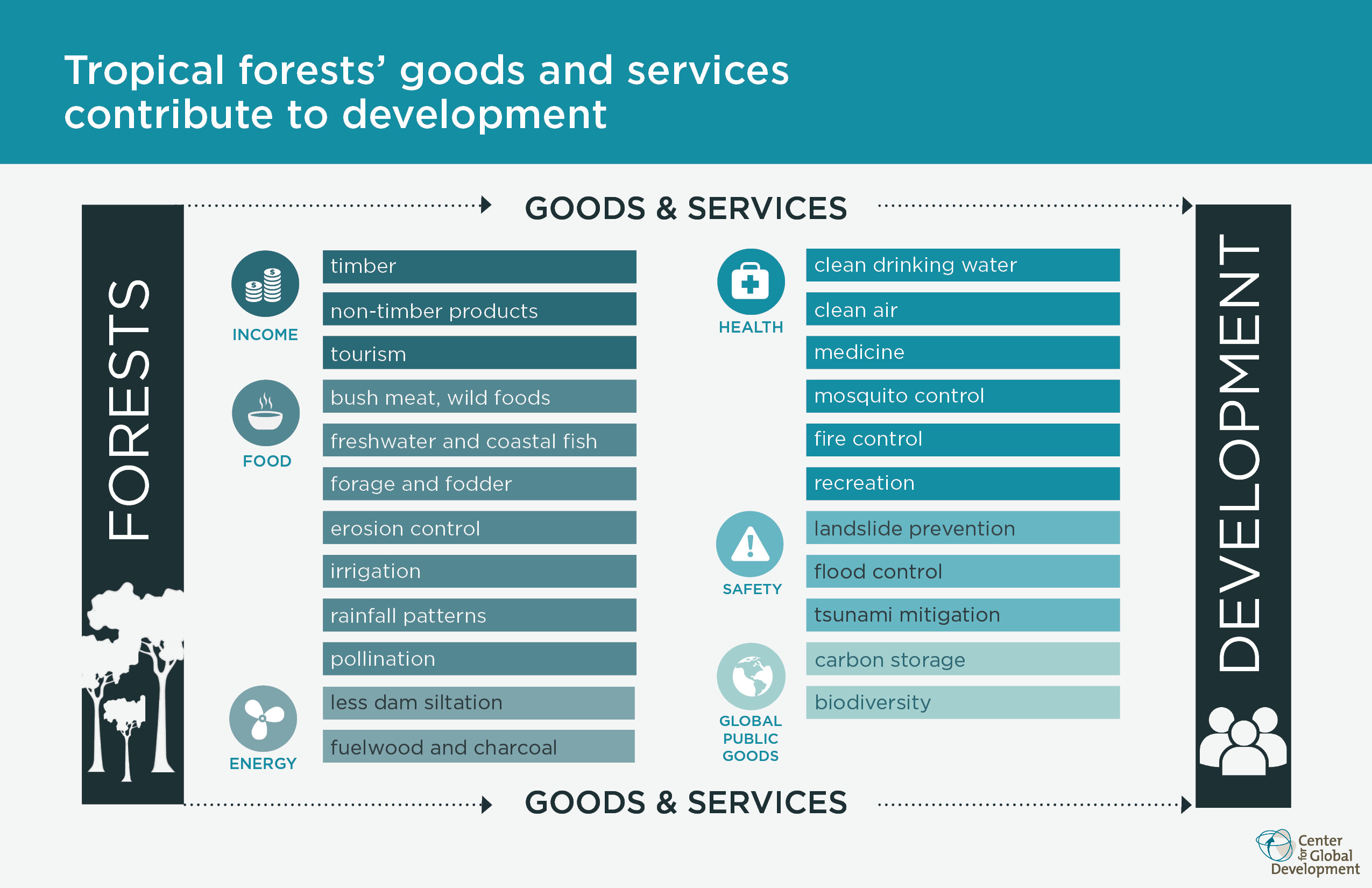 The UNFF panel on the contributions of forests to SDG1 (“End poverty in all its forms everywhere”) was framed around the potential of forests to provide a pathway out of poverty. But examples of sustainable forest management actually providing such a pathway appear to be relatively rare. Panelists and delegates offered a few examples of rural communities gaining increased income from forest products, services, or employment, but they were weighted toward the management of planted forests rather than natural forests. Instead, the panel focused mostly on the many challenges of translating natural forest wealth into money in the pockets of poor people while keeping forests standing.

One useful approach to addressing the lack of clear evidence on how forests can provide pathways to prosperity for the poor is the PRIME framework developed by Priya Shyamsundar and colleagues, with support from the World Bank’s Program on Forests (PROFOR). PRIME stands for Productivity, Rights, Investments, Markets, and Ecosystems. Attempts to nurture community-based forest enterprises have often foundered owing to constraints on the first four factors (the “P,” ‘R,” “I,” and “M”)—low resource and labor productivity, unrecognized rights to forest resources, and limited access to capital and markets.

And while in theory it should be possible to monetize the values of forest-based ecosystem services (the “E”) to provide income to local forest stewards, in practice payments for ecosystem services schemes have found limited application as a poverty reduction strategy, not least because poor people often lack legal status as “sellers” of those services.

In short, mobilizing natural forests as a pathway to prosperity for poor people remains more of a proposition than a widely proven strategy.

The impact of deforestation on poverty

Deforestation, on the other hand, can lead to either prosperity or pauperization, depending on who gains the benefits and who bears the costs. The gains from one-time removal of valuable timber can be considerable, but are often enjoyed by elites in capital cities rather than by the rural poor.

The conversion of forests to other land uses generates winners and losers, both of which may be poor. While it’s true that clearing forests to plant oil palm enables smallholders in Indonesia to send their kids to college, indigenous communities lose access to their livelihoods when their customary forests are converted to industrial-scale plantations. At Loggerheads? Agricultural Expansion, Poverty Reduction, and Environment in the Tropical Forests by World Bank economist Ken Chomitz remains the best resource for understanding such variable deforestation-poverty linkages.

But the impact of deforestation on access to forest goods and services—particularly important to poor households and women—is unambiguously negative. In the first instance, deforestation means the loss of income from collecting wild forest products, which constitute, on average, 21 percent of household incomes in communities that live in and around forests, with the poorest households more forest-dependent.

In addition, forest loss removes the ecosystem services that nurture health and well-being, and buffer poor households from natural disasters. Figure 3 depicts how deforestation transforms forests that provide food and medicine, clean water, and resilience to natural disasters into landscapes prone to landslides, flooding, and the spread of disease. 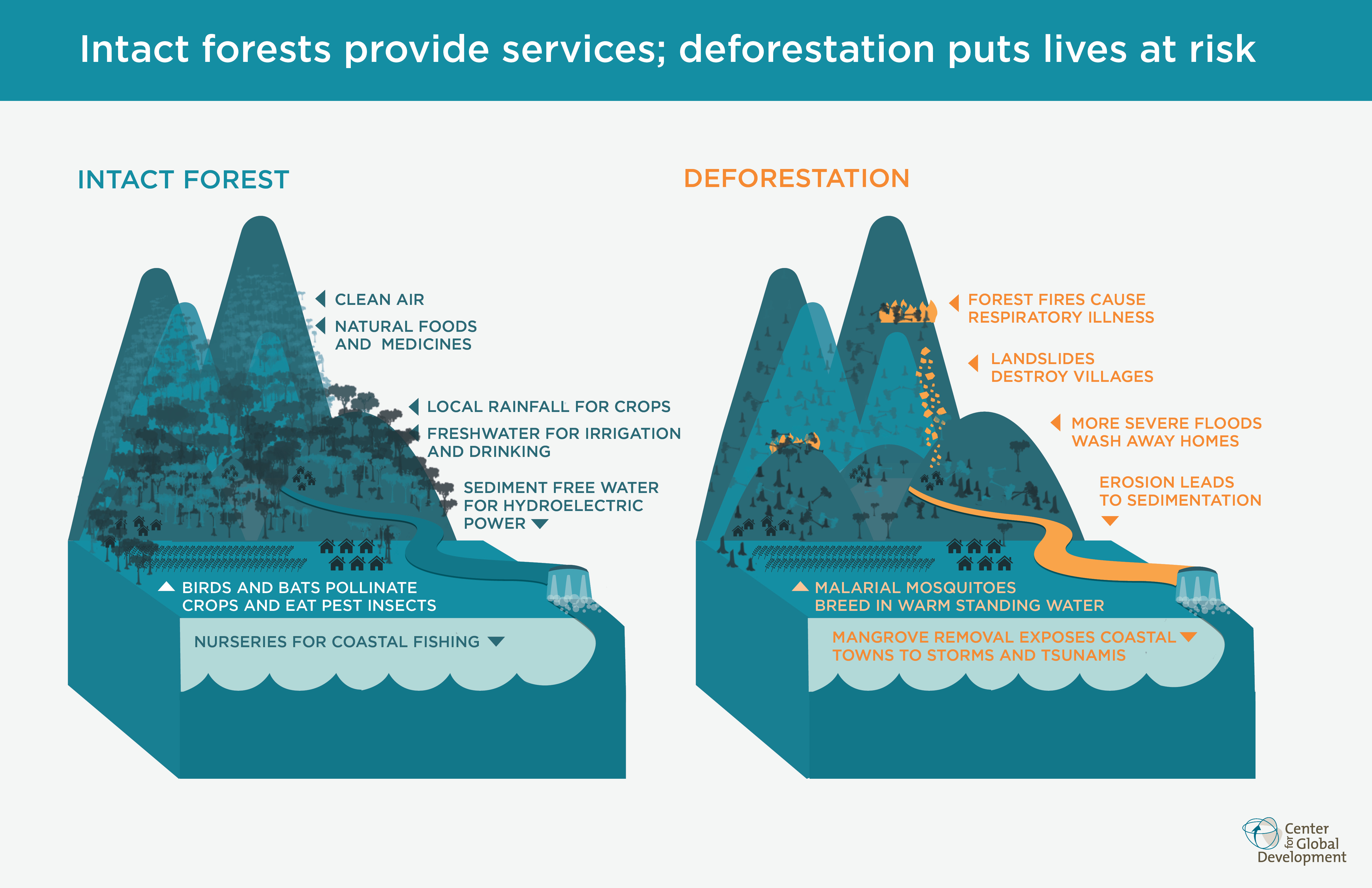 While maintaining forests might sometimes be a pathway to prosperity for poor people, forest loss can certainly be a road to their further immiseration.

The neglected link between forests and poverty via climate change

Yet even a reframing of forest-poverty linkages to include the local implications of forest loss is incomplete without incorporating the connection between forests and global climate change. The extreme weather events that are becoming more frequent and severe on a warming planet threaten to unravel decades of development gains and impose catastrophic hardship on the poorest households.

According to a 2014 National Bureau of Economic Research Working Paper, exposure to a single severe storm—such as Hurricane Mitch, which hit Central America in 1998—can knock a country off its pre-storm economic growth trajectory for decades. With overall economic growth associated with commensurate income growth for poorer segments of society, climate change poses a roadblock on one of the most reliable pathways to prosperity.

As detailed in Why Forests? Why Now?, deforestation is a globally significant cause of the emissions that cause climate change. And because standing and re-growing forests are a safe, natural, and proven carbon capture and storage technology, maintaining forests is an even greater part of the solution to climate change—equivalent to up to 30 percent of global net emissions. 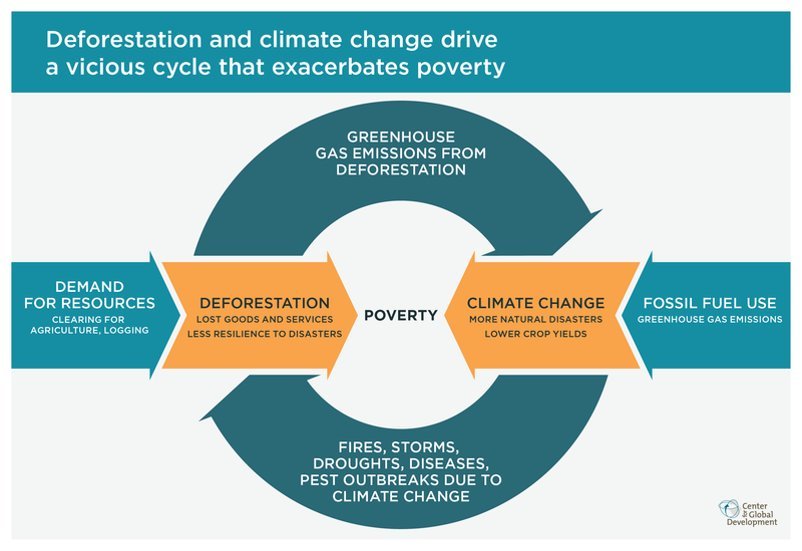 As long as discussions about forests and poverty focus only on mobilizing forests for profits, and fail to recognize deforestation as a pathway to pauperization, forums such as the one last week at UNFF risk barking up the wrong tree.