Globalization of the economic sort is often maligned. But then there is globalism: of norms, values, culture, and attitudes. Are norms and values, even “culture,” being globalized? Is the idea, for example, that women have equal rights, as in the Sustainable Development Goals (SDGs), gaining ground as a universal norm? And might changing norms and values affect legal regimes and behavior (sometimes, maybe)?

The charts below show the results of questions posed to men and women in the (nationally representative) Demographic and Health Surveys starting in the early 2000s, which asked about what circumstances respondents believe might justify a husband beating his wife: when the wife burns the food? Argues with her husband? Goes out without telling him? Neglects the children? Refuses to have sex with him? Is too tired?

The first set of charts indicates the percentage of urban women interviewed who agreed that one or more of the reasons posed justifies wife-beating, for each of five regions and separately for Anglophone and francophone Africa. (We include only countries in which the questions were posed in at least two years. For rural women, the percentages are slightly higher and the trends very much the same, country by country.)

Figure 1. Percentage of respondents who agreed that one or more reasons justify wife-beating by husband. 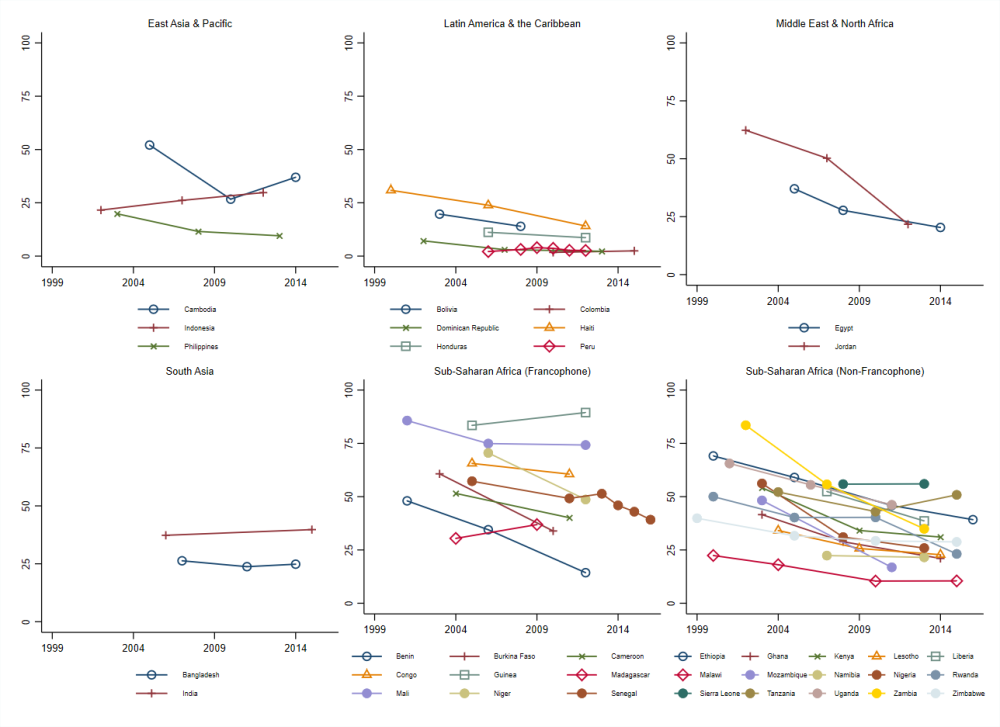 Click on image to enlarge. Source: Demographic and Health Surveys

In many countries surveyed, the absolute percentages of women are disturbingly high—except in Peru and Colombia, both upper middle income countries of Latin America where less than 5 percent of women see some justification for wife-beating. For the most recent survey years in other countries outside Latin America, levels range between 9.5 percent (the Philippines) and 89.5 percent (Guinea). In India and Bangladesh, it is hard to see a “good” downward trend from relatively high levels (see the chapter on meta-preference for sons in this latest economic report on the Indian economy). On the other hand, the trend is downward in Egypt and Jordan, in many countries of francophone Africa, and in most countries of Anglophone Africa.

There are anomalies (why is the percentage rising in Cambodia and Indonesia, while falling to a low level in low-income Benin? (Is it Benin’s democracy?) Why so high in Guinea (recent war? Ebola?) and why is it failing to fall in Sierra Leone (Ebola?), but falling in Liberia (Africa’s first female president for a decade?) Why is the percentage lower and more likely to be falling in Anglophone compared to francophone Africa? Is the difference real—something about colonial history or “culture”—or were the relevant questions framed or understood differently?

The next chart illustrates the difference between the percentage of urban women and men who said that there are one or more justifications for wife-beating (in the most recent year for each country and including countries with only one survey year with these questions). Except in the Dominican Republic, Colombia, Mozambique, Lesotho, and Kenya, the percentage of men who endorse at least one reason is lower. Why? Perhaps because some wives who are survivors of partner violence suffer confirmation bias. Perhaps men more than women try to answer the way they assume they ought to? (See Rachel Glennerster on the challenge of attitude and other questions meant to measure women’s agency or empowerment.)

Figure 2. Percentage of respondents who agreed that one or more reasons justify wife-beating by husband. 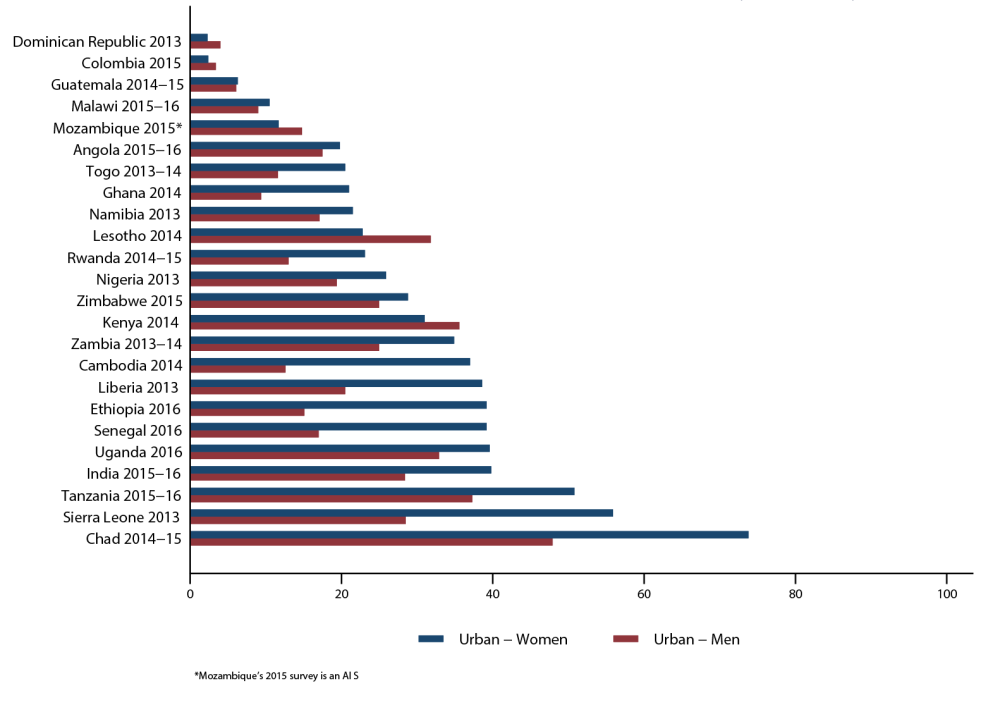 These questions, and additional ones on domestic violence, were only introduced into the DHS after the turn of the century. Why then?  In 1979, the UN General Assembly adopted the Convention on the Elimination of All Forms of Discrimination against Women (CEDAW)—and there is evidence of a subsequent positive and statistically robust (though uneven across countries) “CEDAW Effect” on women’s rights around the world. The Beijing Women's Conference (more formally known as The Fourth World Conference on Women: Action for Equality, Development, and Peace) was in 1995. Did global “jawing” in the late 20th century help inspire, with some lag, the introduction of these questions into the DHS system?

The questions are about attitudes, not behavior. But surely in the long run attitudes matter. Might the universal values reflected in CEDAW, discussed in Beijing, and codified in the Sustainable Development Goals explain some of the downward trend the charts show in many countries? Is recent news of sexual assaults on women—in Delhi on a public bus, by UN peacekeepers in the Congo, in Hollywood, USA—a sign that at the global level the norm is changing? Let us hope there is in fact a phenomenon we could call globalism of norms, and that changing norms are changing behavior. That would mean that sometimes-maligned globalism has been good for women in the most intimate and private part of their lives—and thus good for all of us.