Going Beyond Investment to Close the Gender Gap

“Let our daughters go to school and let them get good jobs. The moment they are independent from men in thinking and earning, they will have very good lives.”

More in This Series

Back in the 1960s and 70s, the standard model of how to make poor countries rich was to insert capital, whether for investments in infrastructure or for human capital investments like education and health. But more recently, most development economists have argued that the central roles in the development story may belong to ideas and institutions like technology, attitudes, legal structures, and the quality of government. The idea is that productive investment follows when these fundamentals are in place.

Despite that shift, the investment agenda is still strong in gender and development circles — think of microfinance aimed at women  or the slogan “invest in a girl.” And it should be. Women lack equal access to finance, and girls are a lot better off if they stay in school. But just as with development in general, it is becoming achingly clear that investment alone isn’t enough to break down gender disparities.

Look at the case of investment in human capital through education. It has done a lot to get more girls in school but not nearly so much to equal out employment opportunities for women. Getting closer to equality in access to good jobs is going to take changes in ideas, attitudes, and institutions.

We have let our daughters go to school, and gender disparities in access have shrunk dramatically. Net primary-school enrollment of girls in sub-Saharan Africa, for example, climbed from 57 percent to 75 percent between 2000 and 2011 compared to 64 percent to 80 percent for boys. In some countries, girls are ahead (see figure 1 below created by the wonderful UNESCO World Inequality Database on Education website). At the tertiary level, female enrollment is actually higher than male enrollment in Europe and Asia and level in the Middle East, although women do still lag men in sub-Saharan Africa and South Asia. 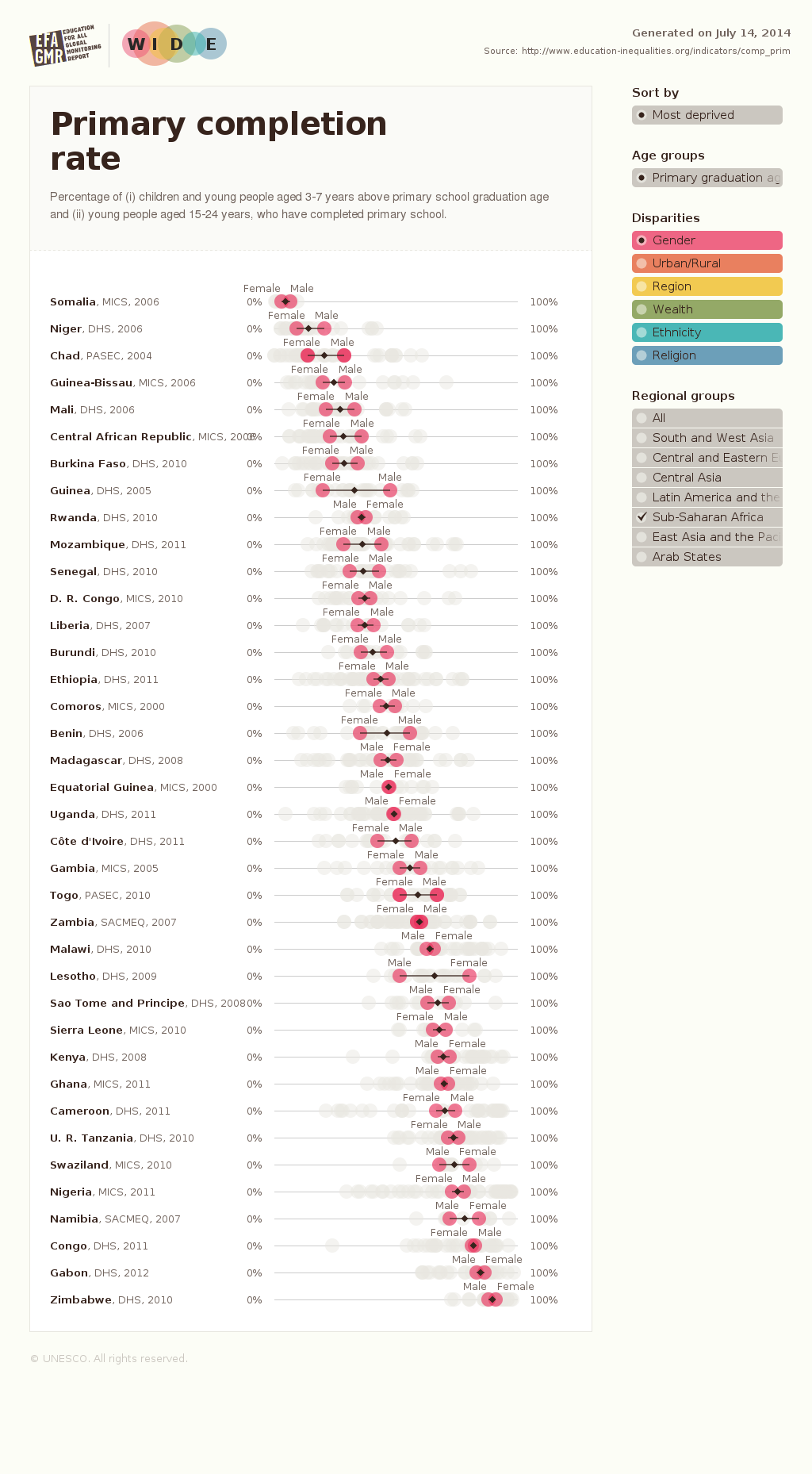 More equality in schooling, however, has not led to that much more equality in jobs. Between 1980 and 2008, global labor-force participation for women climbed from 50 percent to 52 percent while men’s labor-force participation actually declined from 82 percent to 78 percent. One positive element behind those trends is that more young people stayed in school rather than entering the labor force at age 15. But the gender gap fell only six percentage points from 32 percent to 26 percent. In sub-Saharan Africa, women constitute 38 percent of the entire labor force. Women employed in the formal sector are only 5 percent of the labor force compared to a 14 percent share for men. In the Middle East and North Africa, women only account for 17 percent of the labor force.

What accounts for the gap between comparatively equal schooling and comparatively unequal employment outcomes? We know there is a crisis of learning across much of the developing world. One explanation of different labor market outcomes could be that girls are learning less than boys in school because of teacher neglect or other pressures –so they emerge from the same class with less human capital. But if you disaggregate test scores on literacy by gender, the data collected by UNESCO suggests (once again) the gender gap is small (see figure 2). It is true that very few girls in Togo or Niger appear to be learning anything very much in school, but the same applies to boys. Similar learning outcomes, at least at the start of school careers, can’t explain very different employment outcomes. 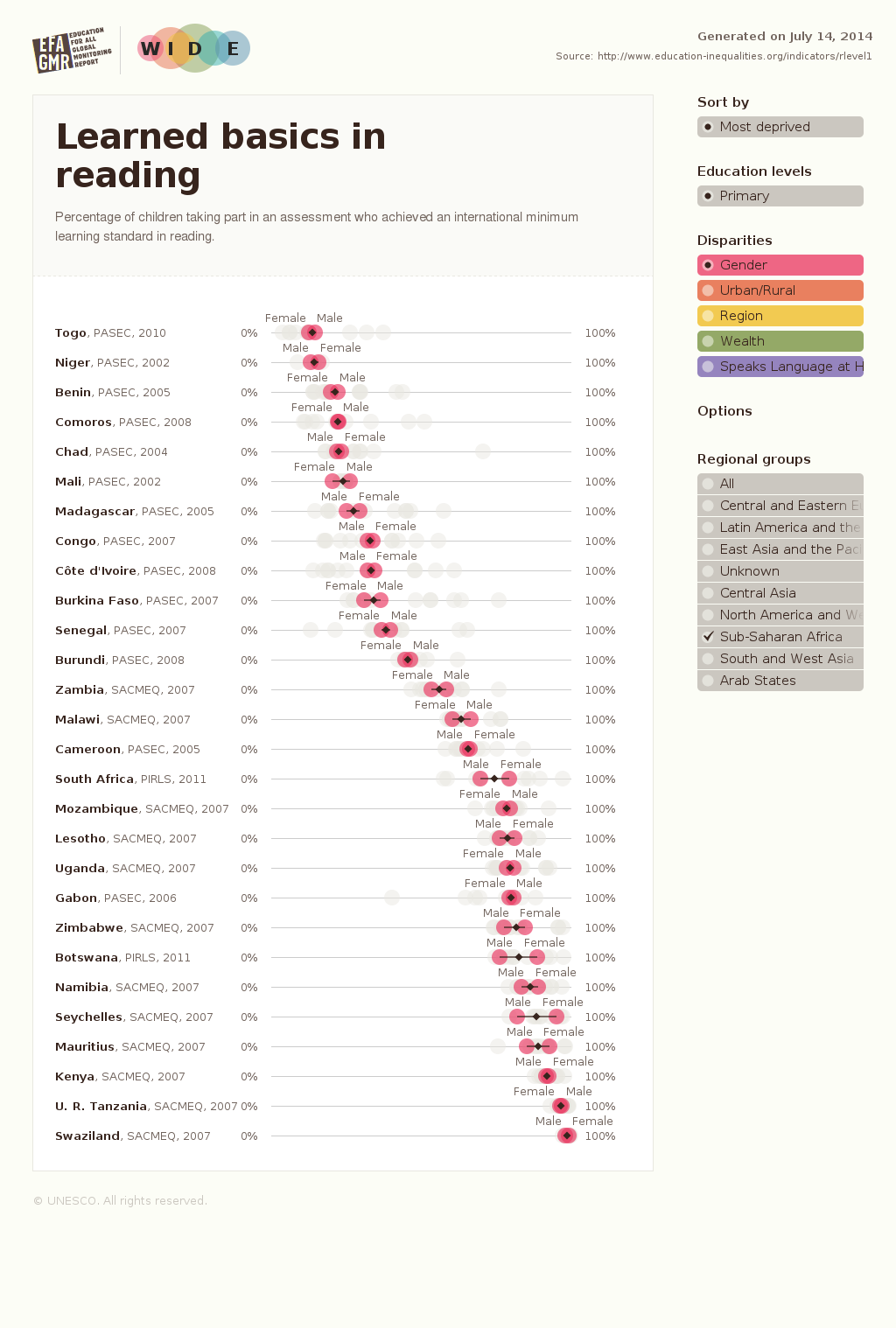 Once women and men get to tertiary education, they do start learning different things. In 84 percent of the countries surveyed as part of the research for the 2012 World Development Report, women dominated tertiary enrollments in education courses. The same was true of 82 percent of countries for courses in health and welfare. At the other end of the scale, men dominated enrollments in every country surveyed in engineering courses and 66 percent of countries in science courses.

That suggests the importance of ideas and attitudes. It used to be a minority view that it was as important to send your girls to school as to send your boys. That’s changed, but apparently it is still a minority view that women can do engineering as well as men. And there are a lot of men and women across the world who still think it is just more important that men get jobs overall. The World Values Survey asks respondents around the world if they think that men have more right to a job than women when jobs are scarce. In the United States, 6 percent agree with that idea; in Spain it is 12 percent. In the Philippines, Algeria, Morocco, and Turkey it is over half; in Nigeria, Egypt, Jordan, and Pakistan, it is above two-thirds.

Those attitudes are reflected in institutions. Thanks to views about “proper” jobs for women, many countries still have laws on the books that ban them from specific positions. In Russia, for example, women are barred from working as freight train conductors, sailors, high-antenna installers, or drivers of loading machines. Russia is hardly alone: 79 different economies restrict the type of jobs women can do just on the grounds of their sex.

The importance of ideas and institutions to gender outcomes is why CGD’s (very nascent) gender program is planning to take as its initial focus norms at the local and global level. We’ll think about a range of tools that rich countries can use to help improve gender outcomes for poor people worldwide, including aid but also trade, finance, and migration policy. We’ll lay out some initial thoughts on program areas in the coming days. But this is very much a toe in the water, and we’d hugely appreciate reactions in the comments or by email.