Grade Repetition in Developing Countries: Repeat to Fail or Second Time’s a Charm?

Was Einstein* right that the definition of insanity is doing the same thing over and over and expecting different results—or does repeating grades help children catch up?

Grade repetition is a familiar topic in Ministries of Education but is rarely discussed as a policy issue in global education. This is surprising in the context of global discussions about education financing, since the cost of many children repeating grades can be astoundingly high.

In this blog post, we review the data on grade repetition in schools in developing countries, looking at: what is known about the scale of repetition in different countries, the estimated cost of repetition to education systems and society, which children are more likely to repeat grades, and the factors that may drive repetition in school systems. Although we do not find the evidence strong enough to recommend whether repetition should be abolished or maintained, there is much to learn from the existing data and research.

We recommend that global and national policymakers firstly understand the cost of repetition so that informed resourcing decisions can be made; secondly learn more about the pedagogical and psychological implications of different repetition policies; thirdly be aware of alternative policy options to help children catch up and maintain pace with the curriculum; and finally invest in more research to establish whether grade repetition or automatic promotion is more likely to improve student attainment and achievement.

Where repetition rates are high, the costs to education systems (and potentially to societies) are huge

Burundi spends more than 15 percent of its annual basic education budget on repetition, and South Africa spends over $750 million a year on repeaters in primary school alone. The non-monetary consequences, such as gross over-enrollment in the early grades (which lead to overcrowded classrooms and age-distortions), potentially further reduce the efficiency of an education system.

Figure 1. Rates and cost of repetition 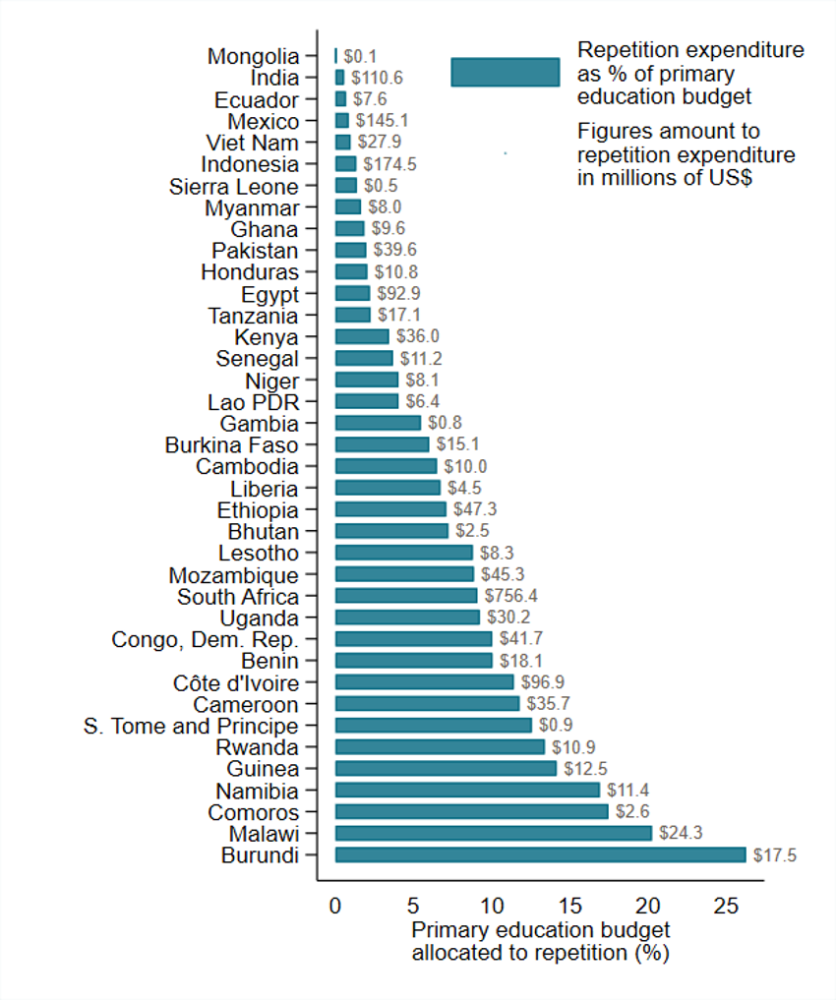 Expenditure on children repeating grades is just one part of the overall cost of repetition. If repetition causes lower primary and secondary completion rates, then this would have high cost to individuals and to society. Van der Berg et al. estimate that in South Africa the direct costs of repetition are a tiny fraction (about 1 percent) of the total social loss incurred through far fewer adolescents obtaining the school-leaving certificate after 12 years. Of course, these data must be considered alongside scenarios where children do benefit from the remedial effects of repetition.

Student dropout may be an undesirable consequence of grade repetition

Longitudinal data has repeatedly shown that children who repeat grades are also more likely to stop going to school before completing primary or secondary. Using cross-country data, we can see that there is perhaps higher survival to the end of primary in countries where there is lower repetition (Figure 2).

Several qualitative studies further suggest a link between the two. Through interviews with parents, teachers, and district managers in rural Malawi,  Watkins and Ashforth found that the main reason given for eventual student dropout was the persistent repetition of classes. 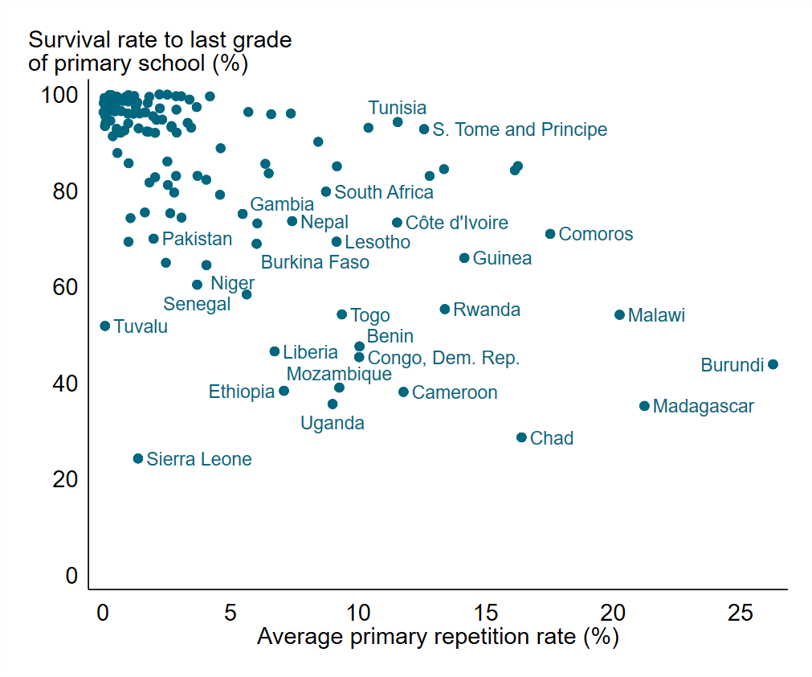 Although these studies are suggestive, there is very little research that seeks to identify the causal impact of repetition on dropout. It is not straightforward: repeating students may well have a higher likelihood of dropping out than non-repeaters, aside from any positive or negative effects of repetition itself. Two of the better attempts at identifying the direct effect of repetition are from Senegal, where Glick and Sahn found that students repeating grades are more likely to drop out than students with similar ability who are not held back. Another study by PIerre Andre shows a negative effect of grade repetition on the probability of being enrolled in school the next year.

Household survey data allow us to look at the backgrounds of students who repeat and reveal that rates are higher among children from poorer households (Figure 3). There is substantial variation across countries—with small wealth gaps in some countries and richer kids being required to repeat more in others. This is a puzzle: repetition is supposedly targeted at low-performing students, and poorer children are much more likely to be learning-poor than their better-off peers, even when in school. But perhaps repetition is mis-targeted:  in economically segregated schools perhaps the bottom 10 percent of children repeat regardless of absolute performance. 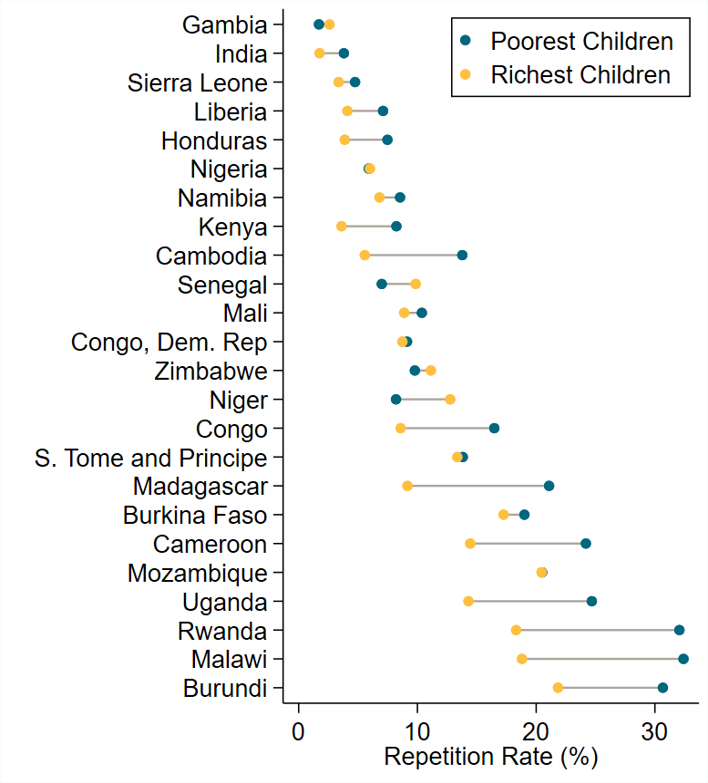 We do indeed have some evidence that repeaters are mistargeted. Using the PASEC sample, Michaelowa finds that in Senegal and Cote d’Ivoire 21 percent of students required to repeat are average performers and seven percent are high-achieving students. That is a significant proportion of children unnecessarily repeating a school year. Mistargeting may be due to inadequate evaluation, teacher bias, or an under-supply of places where children can advance.

Despite what we know about the prevalence of repetition, we know very little about what drives high rates in different countries

Taking the educational constraints first, multi-language education systems or overly ambitious curriculums may be a reason for grade repetition across contexts. In Burundi, the taught language switches from Kirundi to French in the fifth grade. This is where we observe (Figure 4) the highest dropout rates.

Figure 4. Repetition and dropout by grade in Burundi 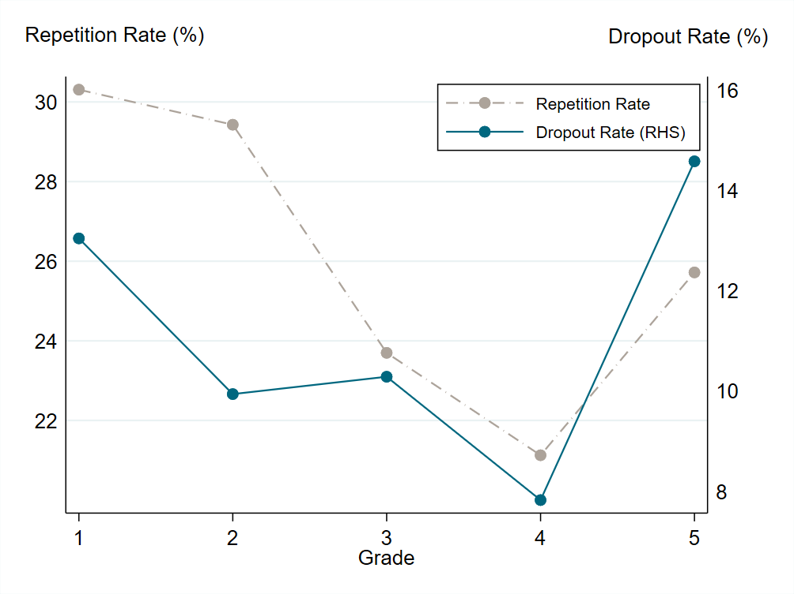 In later years, high-stakes exams have been shown to increase the number of students held back. In countries where schools can automatically promote their students, repetition rates may be low until the year of the relevant exam (or the year before in several cases) when they suddenly jump. In Burkina Faso, for example, there are low repetition rates until grade six, where almost a fifth of children repeat the grade (Figure 5). However, this pattern varies across countries suggesting that repetition can be both a grade-specific and a general phenomenon. 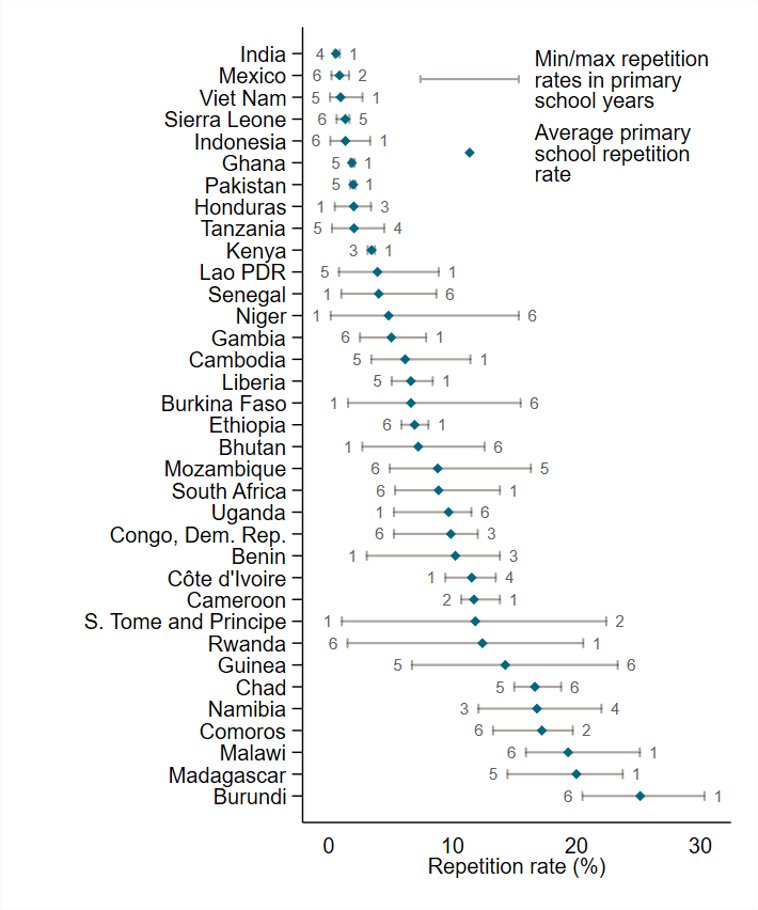 There are also resource constraints that could lead to grade repetition, like an under-supply of places in later grades. Gomes-Neto and Hanushek show that in rural northeast Brazil there are simply insufficient spots for children to advance to. Teachers repeat children to keep them in school, allowing only the most proficient to progress to further educational opportunities.

The lack of free pre-primary or school-readiness programs, for example in Malawi, may set in place a cycle of over-enrolment, high repetition, and inefficiency in the first few grades. Parents enrol their children early into (free) primary school, sometimes with an expectation that they will progress slowly and repeat. This inflates intake rates and class sizes and starts the early-grade “churn” in classes.

Finally, historical and cultural components linked to traditions in the development of education systems likely contribute to repetition policies and rates. Former French colonies in Africa generally follow the French tradition where repetition is used as a learning and motivational tool, while systems that have taken more from Anglo-Saxon or Scandinavian traditions tend not to use repetition as much (Figure 6). 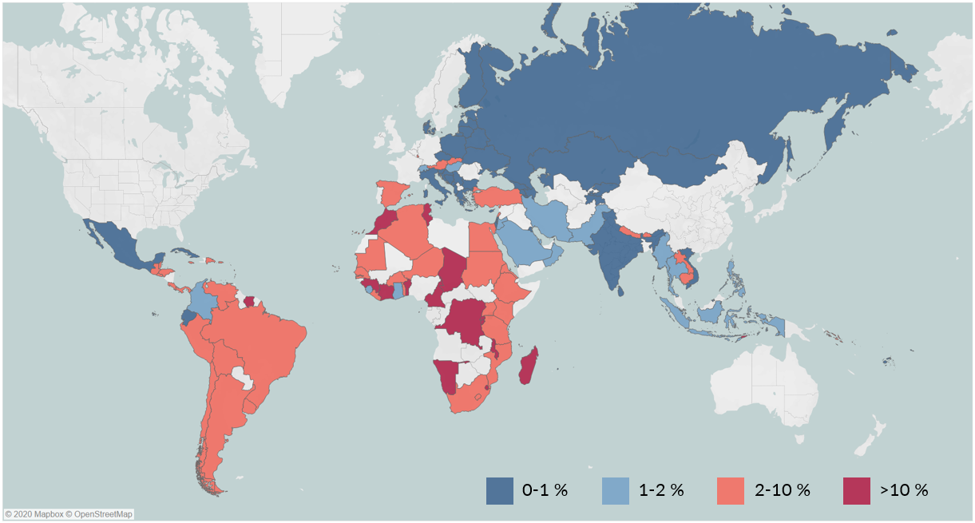 From the data we have, it is not clear that repetition helps children catch up

Repetition is an easy-to-implement policy. But is it helping children to catch up? And where the opportunity cost of schooling rises with age, is it sensible to put children through 15 years of schooling to complete 12 grades?

Figure 7. How much more (or less) progress do repeating students make relative to their peers?

Governments could provide once-off catch-up programs that target children at risk of repetition or dropout (and reintegrate out-of-school children) through a program to get them ready for the next year. The Luminos Fund, for example, focuses on out-of-school children and aims to reintegrate them into government schools. An evaluation of the program in Ethiopia found children enrolled in the program were less likely to drop out and outperformed other students in some measures. Implementing this as a summer-camp through government systems, using government schools and staff, may be feasible and has been attempted with experimental programs in Ethiopia and Mozambique for example.

If the challenge is keeping-up (rather than catching-up), then more regular remedial classes may be needed. Teaching at the Right Level, or its variants, pioneered by Pratham in India, groups children by ability and teaches them as a homogenous group. This approach has now been integrated within the traditional school day and continues to be implemented and tested in multiple ways, including four different experiments in India and several African countries.

If student are progressing slowly as a result of early childhood development issues, then increased access to a developmentally appropriate pre-primary program can relieve some of the enrolment pressure in grade one and support children to develop foundational cognitive and socio-emotional skills. Given the high cost of repetition, many countries may already be paying for pre-primary education without realizing it.

Thinking through whether any of the options laid out above—or any alternative—are preferable to repetition requires better data than we currently have. It’s not news that administrative and survey data vary in core indicators and, for the measurement of grade repetition, the differences are often substantial. To illustrate this, we contrasted DHS data and UIS data (i.e., administrative data reported through UNESCO) on gender-specific repetition rates. (see Figure 8). In four of nine countries shown, the rates are double in the household survey; in one case the rate is half in the household survey; rank-order changes, and in two cases the higher-repeating gender switches. 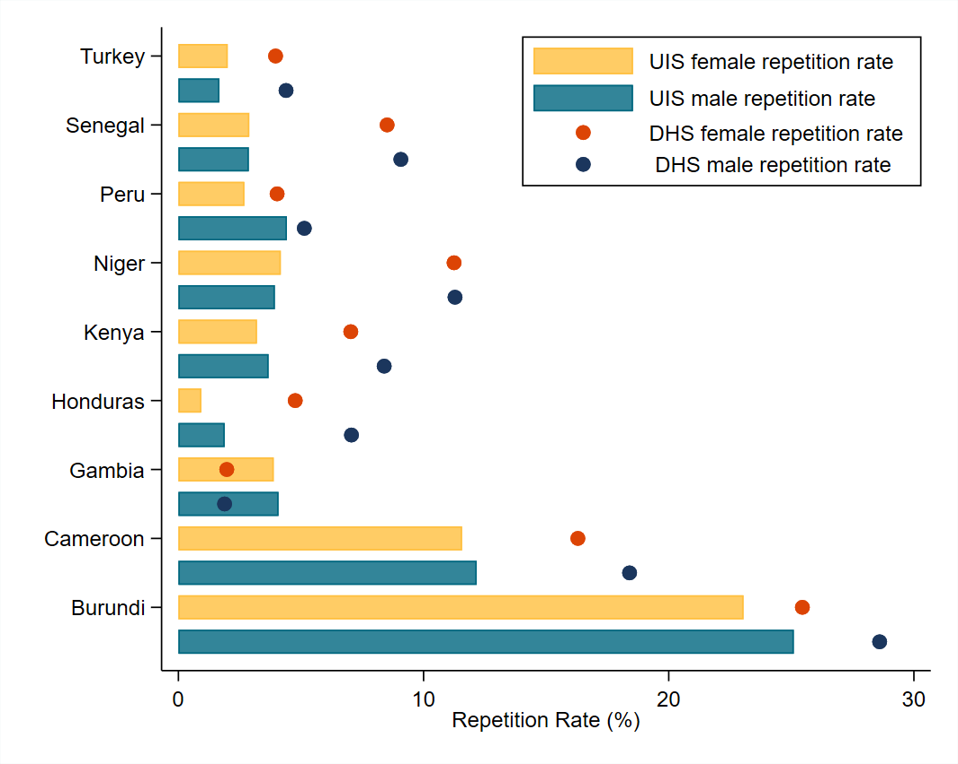 Source: Authors’ analysis of DHS and UIS data (Latest available data. Restricted to cases with a maximum of five years’ difference between sources).

On the surface, repetition seems like an easy-to-implement remedial option, but very little is known about the extent to which it is a policy that helps children, or instead wastes resources with few positive effects. More research would help countries consider whether they should reform their policies on grade retention.

What is clear is that education systems, schools, and teachers need ways to support low-attaining or out-of-school children to catch up with their peers. There are some evidenced programs that do this and, with learning levels as low as they are, more investment is required to get this support to the children who need it.

Thanks to Alexis Le Nestour for providing insights, analysis and plenty of ideas. Thanks to Caitlin Baron, Lee Crawfurd, and Justin Sandefur for their comments on an earlier version of this blog post.

* a quotation that is probably misattributed to Einstein 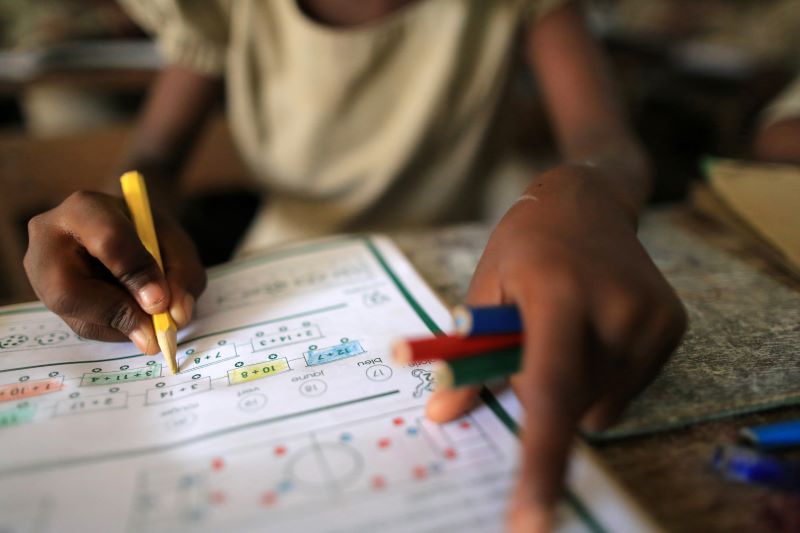 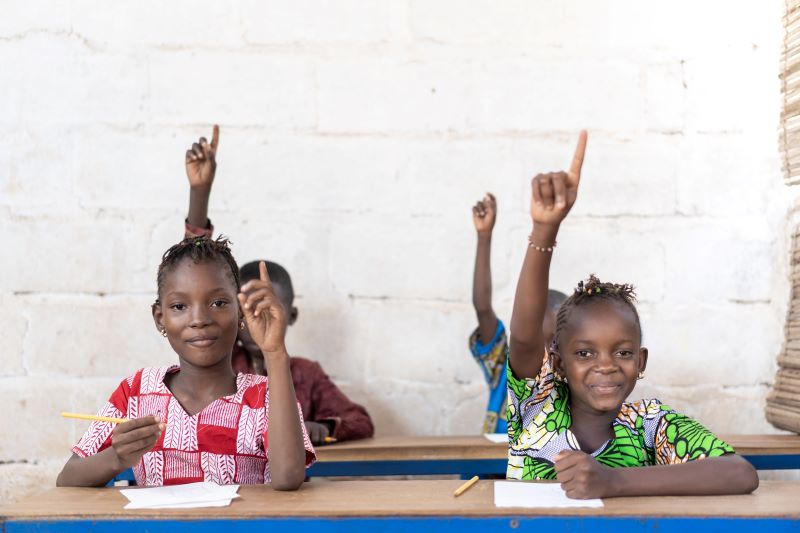 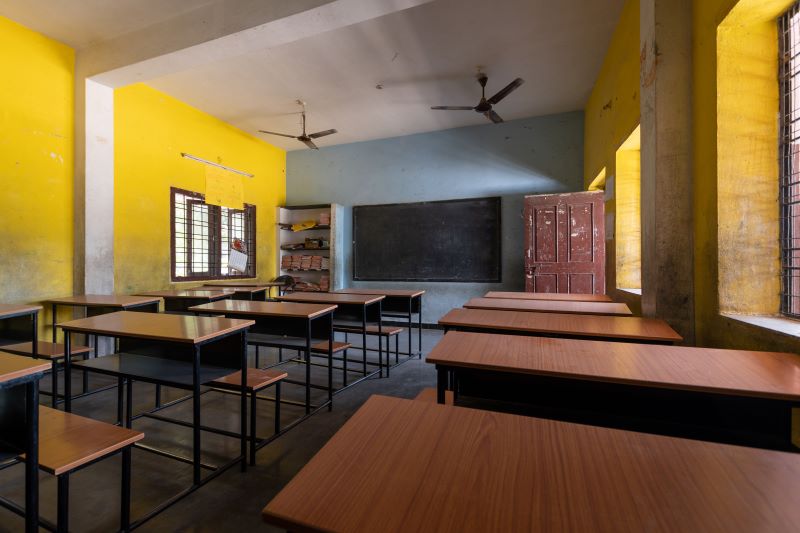