How Will COVID-19 Impact Our Progress Towards Universal Health Coverage? | Center for Global Development | Ideas to Action Skip to main content

How Will COVID-19 Impact Our Progress Towards Universal Health Coverage?

Prior to the pandemic, many low-and middle-income countries (LMICs)–Bangladesh, Ethiopia, Senegal, Uganda, and Zambia to name a few—were on track to expand their Universal Health Coverage (UHC) arrangements. Under these UHC policies all people in a given jurisdiction would have access to the needed health services, of sufficient quality, and without exposing them to financial hardship (as defined by WHO). After two years of piloting, Kenya announced its plans to scale up its UHC policy to the entire country two months ago, in the middle of the pandemic. However, can LMICs still make real progress towards UHC as their economies enter some of the most severe recessions in centuries?

Should we still be working towards UHC?

As all eyes are on pandemic management and preparedness, there may be discussions about delaying the implementation of a UHC policy. However, the pandemic has not fundamentally challenged the rationale for and goals of UHC. On the contrary, many have advocated the need to speed implementation of UHC and build resilient health systems as a strategy to address the current and potential future pandemic(s).

UHC may be also important to address the added direct and indirect disease burden from the pandemic now and in the years to come. This includes increasing morbidities from disruptions in provision and access to health services. For instance, of 29 countries that suspended measles campaigns, 18 have reported new outbreaks. A recent modelling study showed that in the absence of catch-up campaigns, the disruptions in routine vaccination efforts would lead to an increase in measles and yellow fever disease burdens between 2020-2030, although the magnitude of those impacts will vary across infections and countries.

Financial protection, or ensuring that individuals and families access essential health services without suffering undue financial hardship, is also integral to UHC policies. Protecting against the risk of impoverishment due to ill health or barriers to healthcare utilization will become all the more important as global poverty is expected to rise significantly for the first time in 20 years, with 150 million people pushed into extreme poverty by 2021 according to the World Bank. Policies to protect the poorest households from catastrophic medical expenditure, including from COVID, will be essential both during and after the pandemic.

Implementing UHC requires significant pooled public resources. This was the biggest barrier to achieving UHC in Asia. The Disease Control Priorities 3 estimated that the annual cost of providing an essential package of care (at 80 percent population coverage) to average $79 and $130 in respectively low-income (LICs) and lower middle-income countries (MICs). In Thailand, the budget of the country’s Universal Coverage Scheme in its first year (2002) was $27.92 per capita and grew over threefold in the first decade of implementation (Hanvoravongchai, 2013). Meeting such resource requirements has always been a challenge, even before the pandemic: in 2018, 22 LICs spent less than $10 per capita through government sources on health, and seven countries (Chad, Guinea-Bissau, Eritrea, CAR, Cameroon, DRC, and Afghanistan) spent as little as 0.5 percent of gross domestic product (GDP). Recent estimates suggest that achieving UHC would require per capita health expenditure to quadruple in LICs and double in MICs by 2030.

The pandemic is likely to exacerbate the constraints on public health financing in LMICs through the following channels: (i) decline in GDP translating into a decline in government revenues, (ii) decline in external support, and (ii) additional direct health costs from the COVID response.

First, the pandemic is already morphing into a global economic shock across the world: the IMF estimated that global growth contracted by 3.5 percent in 2020, though recovery is expected to differ by region, with LICs predicted to experience greater losses. 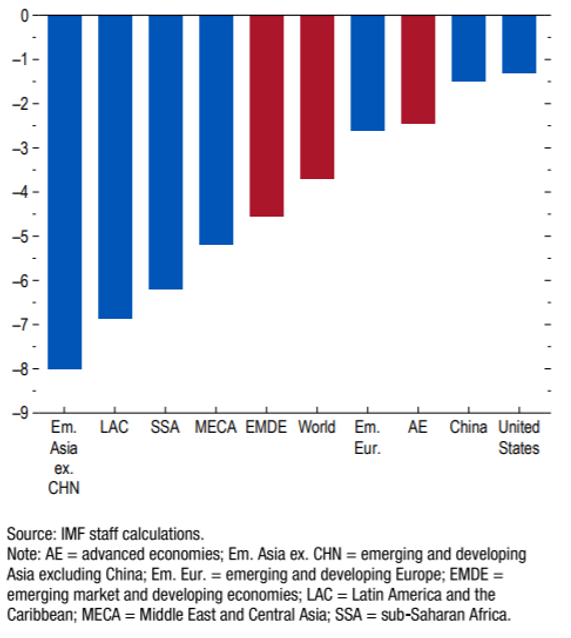 This drop of economic activity will affect all major sources of tax revenues. For example, a reduction in travel, international and domestic trade will result in declining revenues from consumption taxes (e.g., VAT), a major contributor to LMICs’ coffers. The World Bank estimates that government revenues in the sub-Saharan region will drop by 12-16 percent compared to a non-COVID scenario. To further compound matters, some LMICs have also made significant cuts in health budgets (compared to other budgets) last year: in Nigeria, severe cuts to health represent a 40 percent reduction in government spending on health even while there was need to surge spending in response to COVID-19.

Second, while external funding only represents a marginal share of domestic health spending overall, it is an important source of funds in specific areas of public health. For instance, close to 50 percent of the total resources spent on the fight against HIV/AIDS in LMICs came from external sources. As a result of COVID, this source of income is also predicted to fall as HICs economies shrink. The OECD estimates that the decline in development finance (albeit not specifically in health) will exceed the decline following the 2008 Global Financial crisis by 60 percent. The United Kingdom, previously the world’s second largest source of aid country contributor, also recently announced reductions in the UK aid budget from 0.7 percent of gross national income (GNI) to 0.5 percent, which will, combined with the GDP decline, lead to a reduction of £4.5bn or $6.2bn relative to 2019.

Finally, the direct costs of the COVID response (e.g., to health infrastructure such as testing facilities, hand-washing stations, tracing systems and employment benefits) are also significant in all countries. LICs have allocated an estimated $3.20 per capita towards pandemic response, equivalent to 36.4 percent of their combined health budgets. Those costs were covered by exceptional budget allocations, but sometimes required reallocations within existing budgets. As we see the demand for COVID-19 vaccine coverage go well beyond most-vulnerable groups, we also observe large spend on vaccines that represents multiples of country vaccination budgets and sometimes multiples of health budgets.

Can we build back better?

It has now become evident that LMICs will need to adjust to the new realities created by the pandemic. If UHC is to become more than an aspiration, we put forward several considerations for existing and future efforts.