International Investment Agreements: Not Fit for the 2030 Sustainable Development Agenda

In a world with the 2030 Agenda for Sustainable Development, the international investment policy system stands as an obsolete regime in urgent need of revision and reform. This is the main conclusion of the analysis that the think tank CIECODE conducted for CGD’s 2017 Commitment to Development Index (CDI). The analysis measures the amount of “sustainable development content” included in International Investment Agreements (IIAs) signed between developing and developed countries. Here, we look at best practices, main issues and which countries could do better.

But, first, what do IIAs have to do with sustainable development? By balancing foreign investor’s protection on one hand and States’ right to pursue public policy interests on the other, IIAs have the capacity to influence the type of foreign investments and the conditions under which they are made. Foreign investments have been developing countries’ main source of external finance for the last two decades (beyond remittances, external debt, or ODA) and that they have concrete implications in host countries’ day-to-day realities (job creation, environmental impact, fiscal revenues generation, or the promotion of vulnerable social groups).

Worldwide, the investment regime is a complex spaghetti bowl made up of more than 3300 IIAs (mainly, Bilateral Investment Treaties and Free Trade Agreements), which has been expanding relentlessly since the early 80’s. 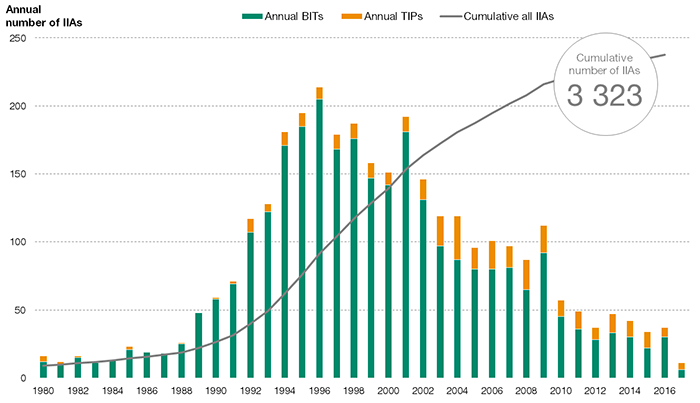 Note: Preliminary data for 2017. 3,323 is the cumulative number of all signed IIAs, independently of their entry into force. Terminated IIAs, for which termination has entered into effect, are not included.

CIECODE has analyzed over 300 IIAs signed by developing countries with the 27 CDI countries, and has observed that sustainable development is often poorly secured in these agreements. When IIAs include social or environmental safeguards, they are so weak and full of caveats that their impact is highly diminished. They are focused on protecting foreign investors’ rights and interests leaving aside their obligations. Finally, they have failed in finding equilibrium between protecting foreign investors from unjustified discrimination measures by the host states and ensuring that these retain their right to regulate for pursuing public policy interests. This bias has prevented IIAs from becoming a useful tool to boost and promote sustainable investments at the global and domestic level.

CIECODE’s analysis also shows that IIAs signed with those developed countries most in need are the ones presenting the scarcest development content. 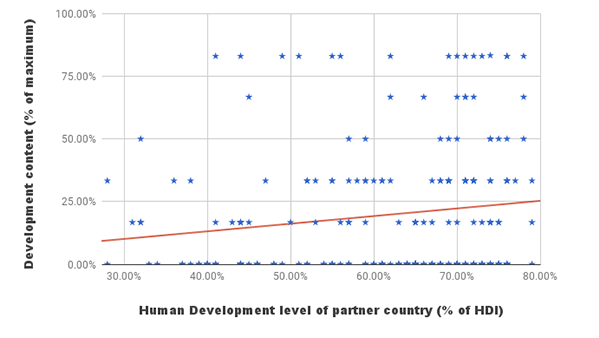 These general conclusions hide many interesting facts and variance at country level. For instance:

There is some good news

In terms of the inclusion of sustainable development and human rights content in investment treaties, the overall situation is still unsatisfactory (the average score of the 300 IIAs analyzed by CIECODE is below 2 out of 10). But, it’s at the same time true that almost all the improvements have taken place in the last 5 to 10 years (see Figure 3). The Investor-State Dispute Settlement system (ISDS) is a relevant area in which some advances have been observed. 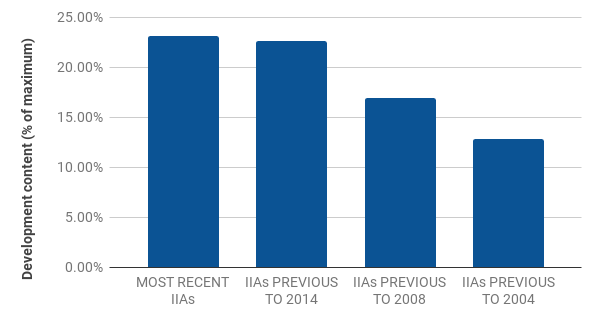 Originally, the ISDS was designed as a tool to protect foreign investors against undoubtedly discriminatory measures by host states. It grants foreign investors the possibility to take their disputes with host states to private international arbitration courts and seek for economic compensation if they believe any law or measure by the host state has damaged its investments and reduced its expected profit.

Today, with more than 60 new ISDS cases presented to tribunals each year, the system has mutated into something vastly different from its original expectations—at times with grave consequences. It gives foreign investors the power to challenge democratic choices by host states, elevates property rights over any other consideration (incl. human rights) and allows for fully confidential procedures. In recent decades, it has allowed investors to oppose health legislations against tobacco and environmental laws against industrial discharges' contamination, and even to challenge the end-of-apartheid laws in South Africa. States, exposed to unforeseen legal and financial risks, may decide to freeze legitimate government policymaking or even withdraw existing regulations. Many actors—from the UN and the EU to academia—agree on the main strands of this verdict.

CIECODE’s analysis shows that the ISDS dispositions are the ones in which few improvements have been made. Around 70 percent of the analyzed agreements do not include any meaningful content to improve the ISDS’ transparency, impartiality, or due process standards.

But there is a new and promising trend. More than 20 States have signed the UN’s Convention on Transparency in ISDS since 2014. This Convention, once in force, will oblige States (and their investors) to comply with a set of stringent transparency standards such as the publication of all relevant documents by the ISDS tribunal or the admittance of any “third persons” affected by the dispute to the process. While these might seem as minor improvements, they are almost disruptive innovations in a system that has remained untouched for almost three decades.

One of the most unexpected conclusions of the analysis comes from applying CIECODE’s methodology to the investment chapter of the draft version of the EU-US Transatlantic Trade and Investment Partnership (TTIP). Despite the concerns with loss of democracy and the power of big corporations that the TTIP provoked in European and North American societies, none of the 300 IIAs analyzed in CIECODE’s study have shown a more development-friendly approach than the TTIP’s draft. This draft safeguarded states’ policy space to “achieve legitimate policy objectives, such as the protection of public health, safety, environment or consumer protection” and granted that the ISDS would operate under adequate independence, fairness, and openness.

The fact that the TTIP’s draft—being produced under high levels of social awareness and public scrutiny—is the IIA with the most advanced provisions in terms of development-content and transparency highlights the importance of public scrutiny to achieve sustainability outcomes in policymaking.

Today, it is no longer enough for investments to create jobs, contribute to economic growth, or generate foreign exchange. The development challenges that lie ahead demand investments that, on top of everything else, are not harmful for the environment, bring social benefits, promote gender equality, and help local companies to move up the global value chain.

If the 2030 Agenda for Sustainable Development is to be taken seriously, the international community must rise to the occasion and fast track the reform of the global investment policy regime in a coherent and ambitious manner. There are evidences, experiences, and best practices ready to be exploited.

Javier Perez is the director of CIECODE, a Spanish research institute working in development and specialized in the analysis of public policies with an impact on sustainable development, social justice and human rights. Economist and jurist, his main area of expertise is international trade policies and its implications for development and human rights. Lately he has lead two innovative projects to monitor and evaluate the Spanish parliamentarian activity from a PCD perspective. Javier worked until 2011 at Oxfam International as Economic Justice Research Coordinator.

Maria Vega is a researcher at CIECODE. She holds a BA in Journalism from Universidad Complutense de Madrid and a MA in International Public Administrations and Politics from Roskilde University. Her main area of expertise is the analysis of migration public policies from a PCD perspective.