Jobs for Women: New Frontiers for Research and Action

The pace towards gender equality has been far too slow. Despite major progress on narrowing gender gaps in educational attainment, global progress has stagnated in a most important area for gender equality: women’s participation in the world of paid work. Gender gaps in economic participation are widespread and persistent, averaging around 27 percent globally in 2015, only about 1.5 percent lower than in 1990. 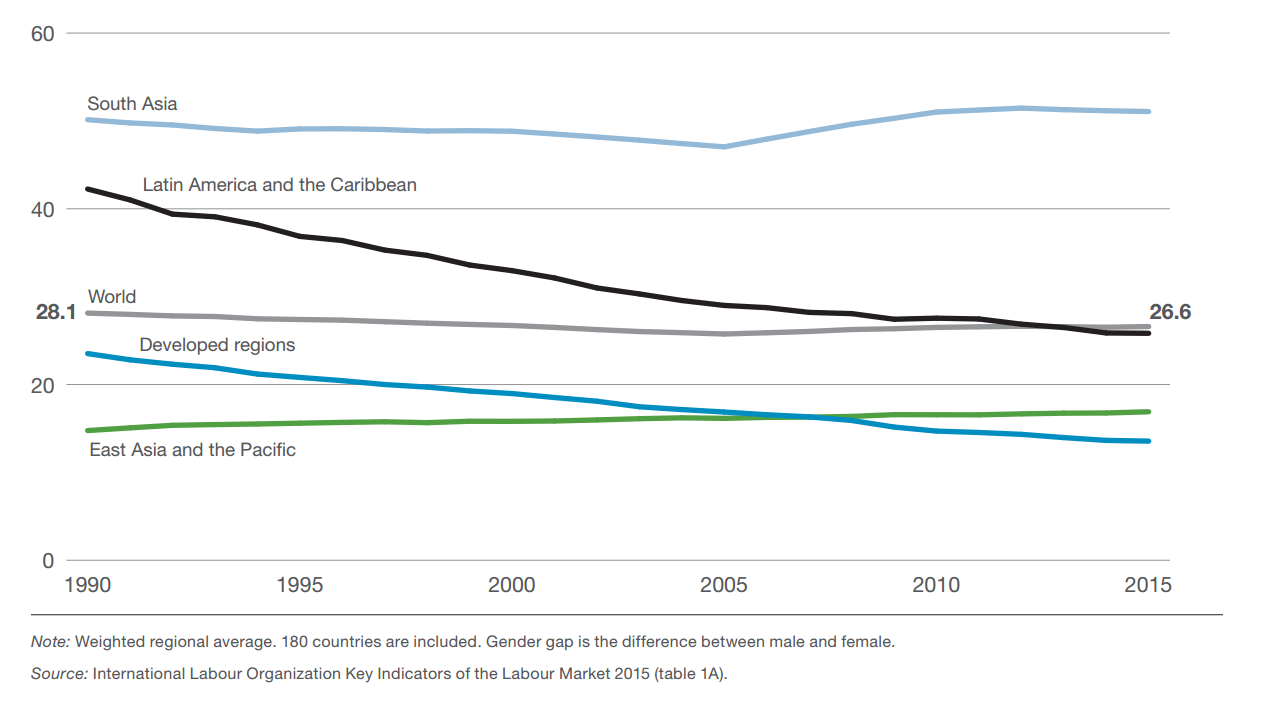 It is thus very timely that the 61st session of the UN Commission on the Status of Women, ongoing this week at the UN, has chosen “Women’s Economic Empowerment in the Changing World of Work” as its priority theme. The choice is commendable in more ways than one: it both draws attention to a crucial topic and emphasizes the context of jobs for women, which has been given little attention.

There is a lot that we have learned recently about women’s participation in the economy and the constraints they face. The 2012 World Development Report on Gender Equality and Development did a particularly thoughtful analysis of the mutually reinforcing market and institutional constraints that keep women in low productivity jobs and perpetuate gender gaps in earnings. Last year’s comprehensive report from the UN Secretary General’s High Level Panel on Women’s Economic Empowerment updated trends and added a welcome focus on the situation of some of the most disadvantaged and discriminated against women in the global workplace—the large number of women workers working in low paid, unprotected informal jobs and as domestic workers.

These reports have highlighted regional differences and called particular attention to the special situation of conflict affected countries. The prescriptions, however, have been global. The time has come to turn to the environment where women’s economic activities take place—sharpening the analysis of widely different environments and how they shape the prospect of jobs for women (and men).

Without considering these nuances, errors will be made and programs will fail. One example is Baird and Ozler’s rich analysis (2012) of the Zomba Cash Transfer Program in Malawi, which offered small cash transfers to adolescent girls to improve school attendance. Once the transfers stopped, the impressive gains girls had made in achievement and autonomy ceased, and they reverted to their dependency on men. One very likely reason for these disappointing results was that in the poverty stricken rural Malawian context there were no jobs for young people. A carefully done analysis by Koolwal and van de Walle (2010) of the effects of access to piped water in rural areas in several low-income countries shows similar importance to the job context. The analysis found that while access to water temporarily relieved women’s time burdens, it did not increase their labor force participation. Interventions can certainly work to lessen women’s unpaid labor burdens, but in impoverished rural environments with few or no job opportunities, these interventions will not have a lasting impact on women’s economic empowerment.

A country’s geography and level of development, stage in the demographic transition and institutions all shape both the nature of jobs and job prospects for women. Demography, in particular, is almost destiny for women, since it defines both their work and life options, and needs to be much better integrated into analysis and the design of policies and programs. The United Nations Foundation and ExxonMobil Foundation's 2013 Roadmap for Promoting Women’s Economic Empowerment outlined different country scenarios depending on demographic and economic variables (with 4 basic country scenarios: high fertility agrarian economies, declining fertility urbanizing economies, declining fertility formalizing economies, and aging societies—and 2 cross cutting scenarios: missing adults / conflict affected countries and resource rich economies / small island nations) and can be a starting point to think through the contextual variables that need to be considered when designing economic programs for women.

More deliberate attention to the context of jobs should result in a better understanding of how gender and gender biases affect the on-the-ground realities of policies. Decision-makers need to understand these realities to create tailored investments and unbiased service provision. Complementing this focus is a need to unpack gender itself and recognize the diversity among women and how geography, poverty, race, and ethnicity interact with gender to deepen discrimination and exclusion. All of this requires better, less biased, more accurate data on women and work. There is a challenging but rich research and action agenda ahead.

Blog Post
How to Promote Young Women’s Resilience in the Face of...
Mayra Buvinic and Rose Pinnington