More on the Definition of ODA: Proper Credit for Credits | Center for Global Development | Ideas to Action Skip to main content

More on the Definition of ODA: Proper Credit for Credits

David Roodman is a former CGD Senior Fellow now working as an independent consultant. Learn more about his work at davidroodman.com.

CGD’s recent publication of my paper on improving the statistical definition of Official Development Assistance (ODA) brought me into contact with several people involved with the ongoing review of this issue. (For the history of that process see my previous post.) Those conversations have stimulated my thinking. They have also helped me appreciate that among the questions in play, the hottest is how to count loans in ODA—where “hot” is some blend of complicated and controversial.

I wrote about loans in my last post. But I focused on arguing against factoring the probability of default into the assessed financial value of a loan. Here, I’ll explain some other loan-related recommendations. In another post, I’ll talk about other questions.

First, a conceptual preliminary, if you’ll forgive the pedagogy.

A fundamental (and uncontroversial) notion in the discussions of loans is that of discounting. As I explained to my son last night, if grandpa gives you $98 today that’s the same, in a certain sense, as him giving you $99 a year from now, or $100 two years from now, because if he gave you the $98 today, you could put it in your savings account where it will earn 1% interest. So we can say that $100 two years from now is equivalent to $98 today. To reach that conclusion we discount the $100 to the present using a rate of 1%/year.

When assessing a loan for ODA eligibility, the DAC effectively reviews all the payments that will be due on it over the life of the loan, discounts them to the present, and adds them up to produce the “net present value” of the debt service. If the net present value is less than 75% of the loan amount—in other words, if the “grant element” is at least 25%—then the loan is classed as ODA. This animated PowerPoint slide illustrates. Because of the discounting, payments due far in the future count less. In fact, because the DAC uses what now looks like a very high rate, 10%, payments due in 30 years hardly matter, counting against the loan at only 5.7 cents on the dollar.

If you understand discounting then, you can understand these four recommendations for reforming how DAC computes the contribution of development loans to foreign aid totals.

Under the status quo, having cleared the 25% grant element threshold and entered the kingdom of aid, a loan affects ODA totals in these ways:

I think the exclusion of interest arose from a historical analogy between net ODA and net Foreign Direct Investment, a standard accounting concept that nets out return of capital to the source country but ignores repatriation of earnings.

But ignoring the “earnings” on development loans makes no sense in aid accounting. As I argued almost exactly 10 years ago, when Ghana writes a loan payment check to Japan, it matters little for the finances of either party whether the check says “interest” or “principal” in the memo field. The gain is the same for Japan, as is the cost for Ghana. So interest received should be subtracted from ODA.

There are two natural ways to enter loans into ODA. One is on a cash basis, which is what the DAC does now. As money goes in and out, ODA gets debited and credited (except that the DAC leaves out interest).

The other way is on an accrual basis, which I favor along with many others. If the payments on a $4 million loan cost $3.17 million after discounting back to the present, as in my PowerPoint example, then just the $0.83 million difference—the grant equivalent of the loan—would be booked as ODA, upon disbursement.

In contrast, accrual accounting dispenses with the need for arbitrary lines. The loan with the 24.99% grant element could be added to ODA at 24.99 cents on the dollar while the 25.01% loan could be added at 25.01 cents on the dollar. The two loans would have virtually identical impact on the borrowing country and virtually identical impact on ODA statistics, which is how it should be.

Recommendation 3: Include in ODA development loans that are currently considered “non-concessional loans” because they fail to clear the 25% grant element threshold

If the previous recommendation is taken up, then even loans with only a small grant element can enter ODA—if at a few pennies on the dollar or euro or pound. Right now such loans are ignored in ODA even though they have financial cost for the lender and benefit for the recipient. Bringing them into ODA would rescue them from a statistical Bermuda Triangle.

Under current DAC rules, a debtor can default on a low-interest loan, the interest and fees can accrue and compound at much higher interest rates, and then the creditor can write off all the additional debt and count the forgiveness as ODA—even though no money has moved. For lack of public data, the extent to which this happens is hard to determine; it appears to have been a major component of the big debt write-downs for Nigeria in 2006 and Myanmar in 2013. Counting these write-offs as ODA rewards donors for first maintaining that debtors ought to repay, so that the arrears can compound, then maintaining that they ought not to repay, so that arrears can be written off as assistance. I think that shouldn’t be the case.

The table below shows my estimates for the impacts of these changes on current aid totals. The first two columns are copied from the table in the last post. The first is Net ODA as a share of national income as currently computed by the DAC. The next column switches from discounting at 10%, which is high in today’s low interest rate environment, to more-realistic Differentiated Discount Rates. The third incorporates the recommendations above as well as I can. Recommendation 3 is mostly not simulated for lack of data. For recommendation 4, all debt relief is excluded, for lack of details on what kinds of debt are being cancelled.

As before, France is the big loser. Portugal also takes a hit. But some donors happen to benefit from the shift from cash to accrual accounting because loan repayments they received in 2012 are no longer subtracted from their ODA. 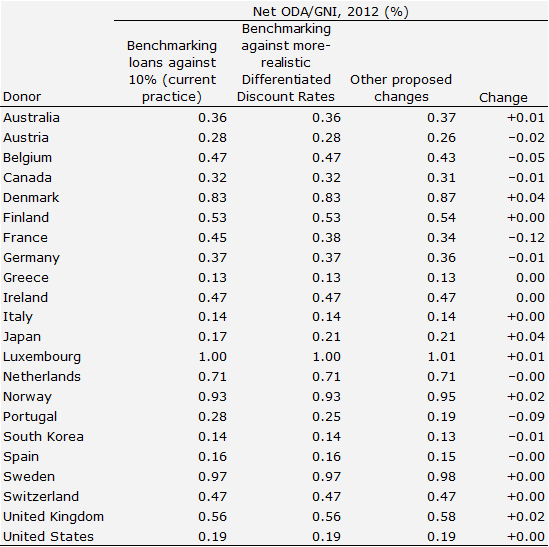 Although interesting, the impacts on ODA totals are less important than the impacts on incentives. Together, the four proposals in this post would bring realism to the DAC system for counting as loans as aid. They would better align the reward for the donor, in the form of a higher ODA total, with the benefit for the recipient. This would create incentives to increase ODA in ways of most financial value for the recipient, rather than least short-run cost for the donor.