Is the New Model IFC a Good Deal for IDA Countries? | Center for Global Development | Ideas to Action Skip to main content

Is the New Model IFC a Good Deal for IDA Countries?

For much of the last decade, the World Bank’s private sector arm, the International Finance Corporation (IFC), has delivered a share of its profits as grants to the World Bank Group’s soft lending arm for governments, the International Development Association (IDA). In the last couple of years that pattern has reversed. The IFC now keeps its own profits and over the course of the period 2018-2020 it will be a net recipient of $2 billion of IDA financing to support its investments. This change has been justified on the grounds that IDA countries desperately need more private investment if they are to meet the ambitious targets set by the UN Sustainable Development Goals (SDGs), and the IFC is a powerful tool to deliver this investment.

In a new policy paper I look at the ability of development finance institutions–including the IFC– to deliver on that development agenda. I suggest they do have a role in meeting the $1.3 trillion of annual incremental investment costs that would be necessary if low and lower middle-income countries were to meet the SDGs, but it will be a relatively small one. Of the three major sectors requiring investment–health, education and infrastructure—DFIs are only significantly involved in the third. Even in this one area, the private sector as a whole still only accounts for a small fraction of infrastructure investment in poorer countries. DFIs in particular provided a little over 1 percent of total infrastructure investment in developing countries in 2018, with no evidence of significant “leverage”–crowding in private investment–especially in the poorest countries. This suggests they are falling far below expectations.

Figure One: Investments Financed by the IFC in IDA Countries 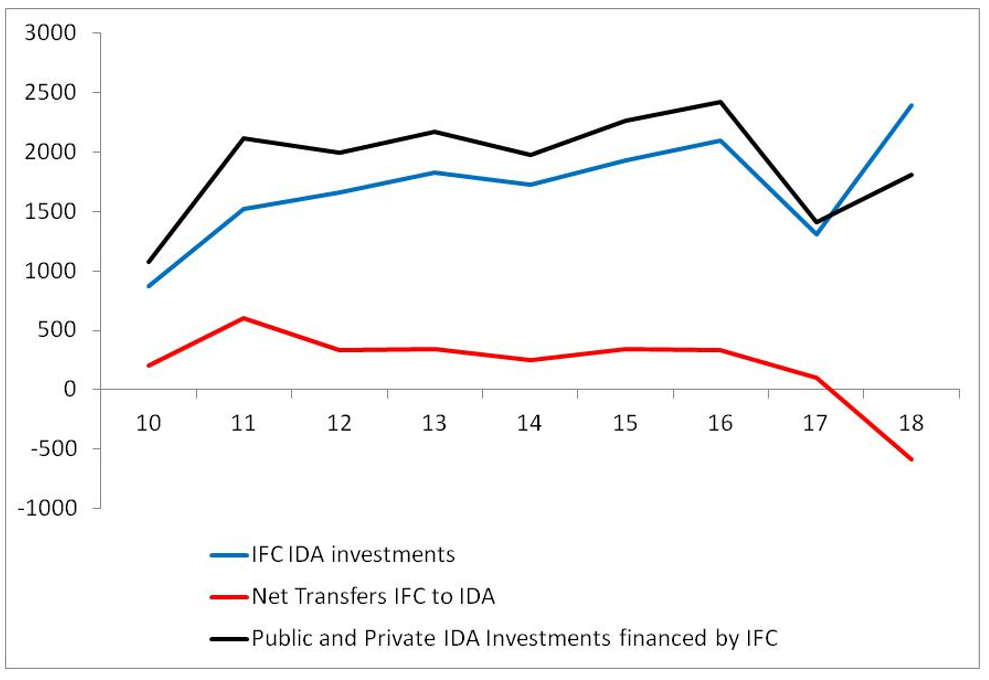 Sources: IFC board approval data for all and IDA countries, US Treasury for IFC transfers to IDA.

The apparent limits to the potential impact of DFIs, including the IFC’s impact, suggests it might be time to rethink the diversion of donor resources from public to private investments. This is also suggested by the evidence regarding the World Bank Group in particular, where reversing the flow of financing between the IFC and IDA has–so far–been accompanied by lower overall investment in IDA countries.

In 2011, 26 percent of IFC’s investments were in today’s (2019) IDA countries, and the IFC delivered $600 hundred million in profits to IDA to be used to support lending. In 2018, 24 percent of IFC’s investments were in IDA countries and the IFC was a net recipient of IDA funding. In the three-year time span of IDA 19, the soft loan arm of the World Bank will hand over $2 billion to IFC to support its private sector investments in IDA countries through the private sector window—or about $660 million per year. That’s a net loss of nearly $1.3 billion to IDA comparing 2011 to 2018–even while the share of IFC projects in IDA countries has fallen.

The IFC’s overall commitment rate has climbed since 2011. In absolute terms, IFC invested $1.5 billion in private sector projects in (2019) IDA countries as well as providing $600 million in grants to IDA. In 2018 it invested $2.4 billion in IDA countries while diverting $660 million from potential IDA lending. (The picture is complicated by the fact that while IDA private sector window billions have been taken out of the resources available to governments, they have been slow to disburse to the private sector, with only about 7 percent of resources committed at the point of the IDA 19 mid-term review). That means that net investment supported by IFC in IDA countries has fallen from $2.1 billion to $1.7 billion comparing 2011 with 2018 (Figure 1). And the average terms of IFC-supported public and private investment in IDA countries combined has significantly worsened–from a 29 percent grant element in 2011 to approximately zero percent in 2018 (Private Sector Window operations do have a grant element, but this is supported by IDA resources, not the IFC). 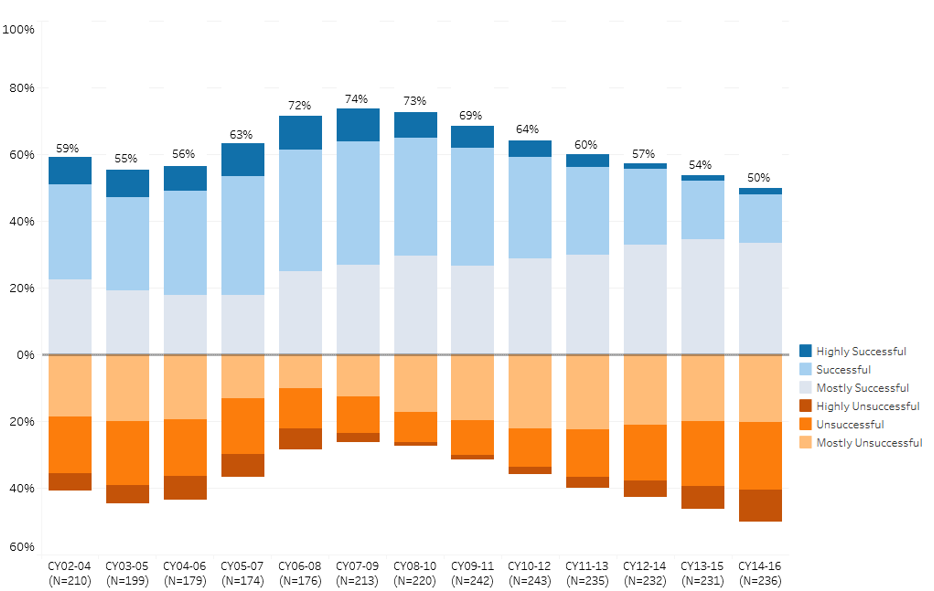 Even if the IFC can’t deliver the SDGs, it might still be that IFC investments in IDA countries deliver a considerably bigger development impact than the average IDA-backed government investment. In that case the tradeoff of (more and cheap) public resources for (less and expensive) private resources would be worth it. That’s difficult to evaluate at the aggregate level. But we do know that the World Bank’s Independent Evaluation Group, which rates project outcomes for both IFC and IDA operations, suggests that IDA is delivering improved results while the story is the reverse for the IFC. In the latest available round of Independent Evaluation Group results for the IFC, presented for CY14-16, only 50 percent of IFC projects were rated mostly successful or better, down from 74 percent CY 07-09. Compare IDA, where 90 percent of project outcomes were rated satisfactory or better in FY187, up from 66 percent in FY10 (Figures Two and Three). 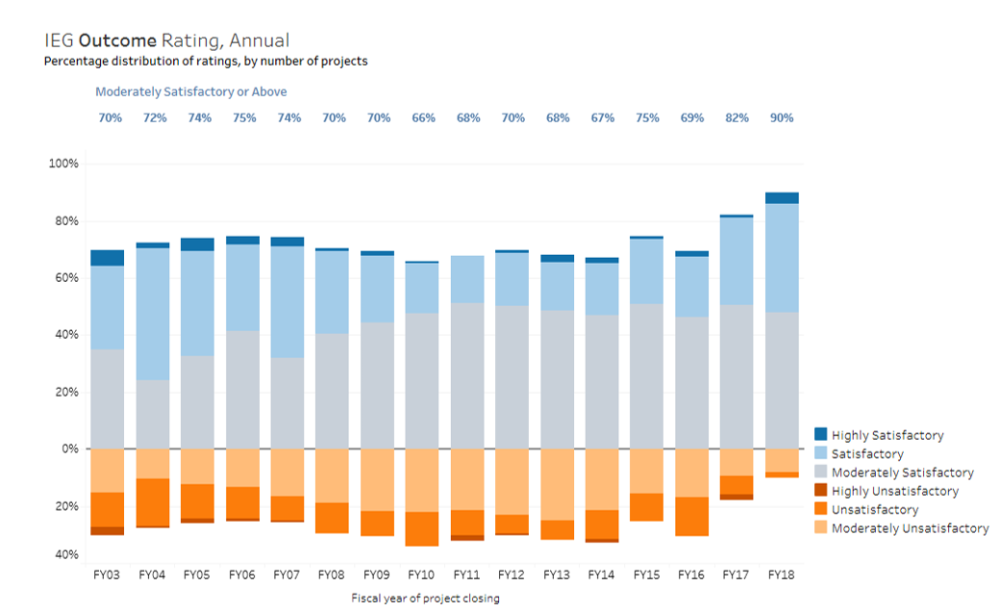 So, IDA countries are getting less private sector financing than they could based on past record from the IFC, they’re seeing a smaller IDA allocation for lack of transfers from the World Bank’s private sector arm, and they’re losing more cash as IDA money is used to support the IFC–which is backing private investments that are generating a declining development impact. There may be good reasons for all of this—a tougher environment for risky investments or increasing competition from other development finance institutions as it might be. And, hopefully, the picture will look more positive when FY 2019 numbers come in. But, to date, it is hardly an optimistic story about the untapped potential of publicly supported private sector investment to deliver for development in the world’s poorest countries. Those thinking about the next IDA round might want to pause for thought as they consider refinancing the Private Sector Window.