ODA for Research & Development: Too Much of a Good Thing?

If you line up all countries ranked by their ODA spending on research and development (R&D) in 2017, the UK has spent more than the next 15 combined. The UK has always been among the biggest spenders on R&D ODA and has accounted for roughly 10 percent of ODA spending on R&D between 1997 and 2010, according to figures from the OECD. But since 2010, the UK has dramatically increased this spending: on average it grew 29 percent each year until 2017. This has the potential to generate new technology and ideas that accelerate the increase in living standards we are witnessing across the globe. But for it to fulfil this potential, there are a series of questions that should be considered concerning its allocation. 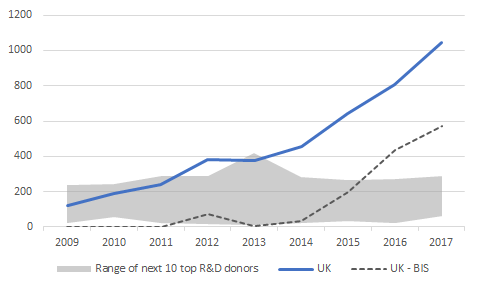 There are significant potential benefits of R&D spending. For example, the development of vaccines and other medicines, crop varieties, production techniques, clean energy sources, and improvements in road safety have all made a huge difference to the well-being of people across the globe, even when accounting for changes in income. Countries today that have a similar level of income to 19th century UK (then the richest country) are much healthier and better educated. The development and spread of new technology (e.g., the smallpox vaccine) are a large part of this good news story. There is little doubt that investment in R&D can be a very good use of ODA.

This potential may not always be fulfilled, however. R&D is risky, and donors may simply be unlucky in choosing which research to fund; they may not have the expertise needed to select the most promising funding avenues. Researchers may engage in rent-seeking—using precious ODA to finance R&D that is unlikely to solve global problems, or to be made available at an affordable price. So while there are significant potential benefits of spending ODA on R&D, it is important to think carefully about how the money is allocated and managed, and the mechanisms that are used to align incentives towards generating affordable and accessible new technologies.

The 2015 UK Aid Strategy included a commitment to spend more on R&D for development. This was motivated by several arguments—some good, some reprehensible.

The good argument, as set out above, is that the spread of knowledge (e.g., new medicines or seed varieties) has resulted in transformational differences to billions of people, irrespective of their level of income. Apparently this is something that donors can actually achieve (unlike trying to bring about industrialisation overseas). Given the potential benefits of developing and spreading new knowledge, it seems fair to conclude that the world spends too little on the global public good of R&D.

The bad argument is that the UK saw an opportunity to channel more of its aid budget to UK universities and research institutes—filling a financial hole left by public spending cuts. If this funding could be channeled to those organisations but still count as aid, the ODA budget would help these organisations cope with the gaps left by government austerity. The other bad reason was that this approach was the result partly of scepticism about aid budgets spent in and through developing countries. The government took too seriously the argument made by Jagdish Bhagwati, and repeated by Angus Deaton’s that aid should be spent on developing countries, but not in them. This scepticism is simply not based on evidence.

There is a considerable opportunity cost to this increase in aid on R&D. Though legally and morally the UK’s commitment to spend 0.7 percent of GNI on ODA is a floor, it is also often viewed as a ceiling. This means that an increase in ODA spent on R&D comes at the expense of other worthwhile and proven aid interventions. The increase in R&D ODA between 2013 and 2017 has been roughly half a billion pounds in total (£125m per year on average). Given that DFID has reported evidence[1] that the cost per life saved could be under £1000, the same amount could have prevented over half a million deaths. Of course, R&D can potentially save many lives too. And we only know the cost-effectiveness of different interventions because of the research that went into evaluating them—we would be in the dark about what works without previous R&D. So although arguments that R&D is a luxury and that we should focus entirely on frontline services are shortsighted, that trade-off still needs to be considered. 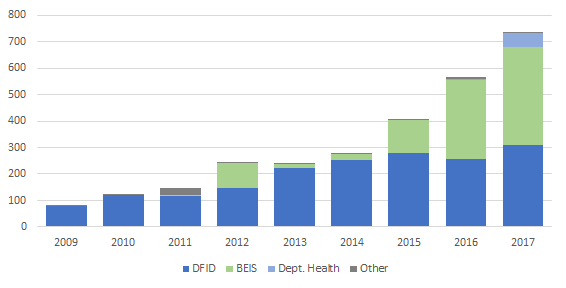 Research and evidence at DFID

Spending on R&D at DFID began to increase around 2009, following the publishing of their Research Strategy for the years 2008-2013, in which they pledged to spend £1 billion over this period. Although evidence is not cited, the report claims that “DFID knows that development research is a good investment,” a view also reiterated by then Director General Andrew Steer when answering parliamentary questions. R&D spend over this period increased from £78 million in 2009 to £223 million in 2013, or from 1 percent to 2 percent of total ODA. Since 2013, spending increased again, but only slightly—to 2.2 percent. Stay tuned for a blog post on the composition of this spending increase.

One story is that the spending increase since 2008 is a reflection of DFID’s commitment to ensure that aid spending is underpinned by evidence. A new “Research and Evidence” division was established, project appraisals became more academic in nature, and building “knowledge about what works” became a primary objective. This type of R&D can produce public goods just as R&D into new vaccines can: by developing and sharing this knowledge base DFID might be having an impact well beyond its own aid, by informing aid allocation decisions across all donors. Textual analysis of DFID projects bears this out to some extent: between 2009 and 2016, the proportion of R&D project focused on “evidence” increased from 5 percent to 47 percent and accounted for about one third of R&D spending in the later year, and DFID staff themselves have reported that the use of evidence had increased. When you take this into account, DFID R&D spending increased more or less in line with general ODA spending (see Table 1).

Research at BEIS: Is a jump in R&D ODA spending cause for concern?

This story is less compelling with other parts of the UK government. While DFID recorded a steady increase following 2010, the Department for Business Innovation and Skills (now part of BEIS) recorded no R&D spend scored as ODA until 2012, and in 2013 only recorded £15 million. From this low base, R&D ODA jumped to £373 million by 2017, a 25-fold increase in four years, or from 0.1 percent to nearly 3 percent of total ODA. As a result, in 2017 this department alone spent more on R&D ODA than France, Germany, and the US combined.

BEIS’s main ODA spending channels are the Newton Fund and the Global Challenge Research Fund, both major funders of research, mainly through the UK research councils (such as the Medical Research Council and Economic and Social Research Council). This is partly the result of a strategic shift towards global public goods provisions, and this funding may well help to push the knowledge frontier about how to reduce poverty.

But such a large and sudden increase deserves scrutiny, and gives rise to three worries about the effectiveness of this use of aid:

These questions were all raised in an Independent Commission for Aid Impact (ICAI) report on the GCRF, although the fund was not formally graded. The Newton Fund is also in the process of being assessed by ICAI, and a separate report from the ONE Campaign suggests that the results may not be encouraging.

If the government wants to “maximise the impact of ODA research … on development outcomes” (p3) then they should consider the following questions:

A. Should all this money, as it is currently being allocated and spent, be legitimately counted as ODA?

B. Is the money being allocated to the right problems with the biggest impact on global poverty and development? If so, how and by whom?

C. Is the money being allocated in ways that make it likely to be used effectively? Are research grants the most appropriate mechanism? What about challenge funds, prizes, advance market commitments, patent buy-outs or any of a number of other possible ways in which governments can finance R&D? And how does the appropriate mechanism vary according to the purpose of the research—some is aimed at implementation and update of technology, some is aimed at creating new products?

D. Why is this R&D spending tied? Shouldn’t it be spent where it will be most effective? If the UK has a comparative advantage in research, untie the aid, and the UK will still get the grants; if no, it would be better spent elsewhere. And it’s great that BEIS encourages partnerships with researchers in developing countries, but should the UK be doing even more to support researchers and organisations in developing countries rather than in the UK?

E. What are the arrangements for accountability for the use of the UK’s very substantial contribution to global R&D through its ODA budget? How will we know how the money is being used, what it is achieving, and how it can be improved? Does this accountability lie with the “Strategic Coherence for ODA funded Research Board” established in 2017 and, if so, what evidence has it considered and what conclusions is it reaching?

The UK Development Secretary, Penny Mordaunt, has been clear that she believes that UK aid should not just be “spent well, but could not be better spent,” and that aid “should be more effective at ending poverty.” My colleagues (Owen Barder and Lee Robinson) and I agree. In principle, the UK may be doing exactly the right thing by substantially increasing the amount of ODA being used for R&D. But ensuring that this happens will require careful thinking about the way this aid is allocated and used.

Over the coming months, we plan to look more closely at these choices and the evidence underpinning them, and propose recommendations for how the UK’s ground-breaking commitment to ODA R&D can reach its potential.

Special thanks to Lee Robinson and Owen Barder, as well as Ian Mitchell and Kalipso Chalkidou for their helpful comments on this blog post.

Blog Post
Expanding the Menagerie: Why the FCDO Needs To Be Both...
Stefan Dercon and Ranil Dissanayake

Blog Post
Building Capacity in the Right Places: How to Make the...
Euan Ritchie and Charles Kenny

Blog Post
Not a Centaur, but Better: Supporting the FCDO to be a...
Stefan Dercon and Ranil Dissanayake