Is OPIC Focused on the Private Sector’s Biggest Constraints?

In an ideal world, development finance institutions (DFIs) should focus on the biggest constraints for businesses in developing countries. This helps to expand their impact beyond a single project or investment, thereby producing more systemic benefits. However, this is a particularly challenging issue for many DFIs given their operating models, which are typically driven by investor priorities. For instance, the Overseas Private Investment Corporation (OPIC) has few tools for generating projects in specific sectors. Of course, the agency can prioritize projects in strategic areas, but only if US investors first come forward with compelling proposals. As such, we might expect to find little alignment between OPIC’s portfolio and a priority list of local business constraints. Based on analysis of our new OPIC Scraped Portfolio dataset, the agency is overwhelming focused on what firms cite as their biggest pain points – reliable electricity and access to capital. Historically, that hasn’t always been the case.

According to World Bank surveys, unreliable electricity and inadequate access to capital top the list of business’ constraints globally. Roughly one-in-three firms throughout the developing world cite electricity as a major constraint to their growth, job creation potential, and profitability. This figure reaches a staggering 85 percent in Guinea and 75 percent in Pakistan. Access to finance is another major constraint, especially in Sub-Saharan Africa and the Middle East and North Africa. For instance, three-quarters of African firms rely on internal resources to finance new investments, fundamentally limiting their growth potential. 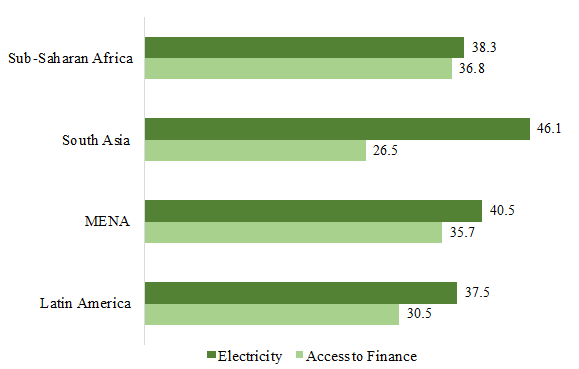 Over time, OPIC has dramatically shifted its portfolio to focus on these two areas. The most notable change occurred in the early-2000s when OPIC began prioritizing support for SME and microfinance on-lending facilities. In 2014, over one-third of the agency’s commitments focused on financial services. Similarly, OPIC’s support for infrastructure projects has exploded since the mid-2000s. Less than 10 percent of its commitments focused on this sector a decade ago. In 2014, that number reached almost 50 percent, driven primarily by large-scale electricity generation projects. This includes several large power investments in Pakistan. Taken together, these two sectors accounted for 85 percent of all OPIC commitments. In other words, OPIC is now primarily an infrastructure and finance institution.

Figure 2 –OPIC Has Shifted Towards Infrastructure and Financial Services Projects 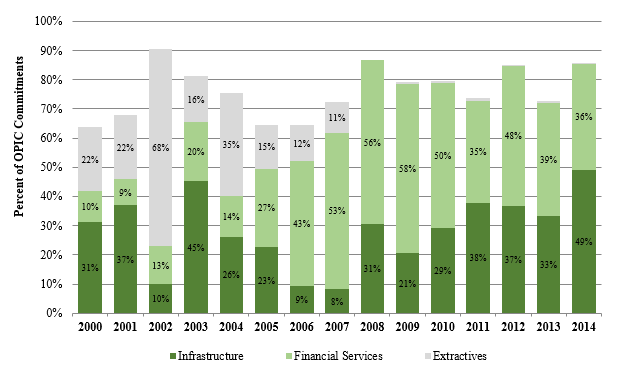 At the same time, OPIC has moved away almost entirely from extractive sector projects like oil and gas exploration and industrial mining. Between 2000 and 2004, extractive industries accounted for roughly 30 percent of total OPIC commitments. Under the Obama Administration, its share has fallen to less than 1 percent.

OPIC clearly has found a way to prioritize sectors that matter both for US investors and local businesses, despite all of its operating constraints. That’s no small feat. If Congress wanted to make its job easier, it could revisit OPIC’s US nexus requirement. Currently, the agency can only support projects with a significant US equity or controlling stake, a relic of its original legislation during the Nixon administration. Allowing OPIC to directly support local businesses in developing countries is a simple tweak to modernize OPIC that should lead to even greater alignment and further increase the agency’s ability to support both development and US foreign policy goals. Given that every other major DFI already does this, it’s time for the US to drop the nexus.

Blog Post
How’s My Driving? What We Can Gauge from DFC’s First...
Clemence Landers