The purchasing-power rates (PPPs) from the 2011 International Comparison Program (ICP) suggest lower inequality and poverty in the world than was thought based on prior ICP data. However, there are some continuing and (as yet) poorly resolved concerns about the data revisions implied by the 2011 ICP. One observation that has puzzled ICP users is why there has not been more of an increase in the price levels (PPP deflated by market exchange rates) in the more rapidly growing developing countries where real wages have been rising markedly; see Ravallion’s blog post on India’s PPP. This is not just true for India. Ravallion has also pointed to the general downward drift in the PPP inflation rate relative to the national price deflators and growth rates when one compares the 2011 ICP with the prior 2005 round. (See the paper here.)

A debate has ensued. Members of the ICP’s Technical Advisory Group (responsible for the methodological choices in the 2011 ICP) have defended the new round, arguing that the revisions stem mainly from claimed deficiencies in the prior ICP round for 2005 (though deficiencies that were not flagged by the ICP at the time the 2005 estimates were released). Defenses of the new ICP can be found in Angus Deaton and Bettina Aten and Robert Inklaar and Prasada Rao.

There is one factor that users of the new ICP data should be aware of, but has not so far received attention in this debate. We must note first that the PPP’s from the ICP are anchored to national accounts. There have been long-standing concerns that, for the purpose of measuring poverty (as distinct from national accounts), the ICP under-weights food, especially for poor people. This concern goes back to all prior ICP rounds and Penn World Tables. The problem is acknowledged in the 2011 ICP report.

There are differences between household consumption as measured in the ICP (following the national accounts) and household consumption as measured in surveys. Food shares may well be overestimated in surveys, to the extent that they do not adequately cover non-food spending (though the true food shares for poor people are probably even higher than one finds on average in the surveys). On the other hand, a number of concerns have also been raised about the quality of national accounts data for poor countries; see for example, Morten Jerven’s book Poor Numbers. Household surveys may well be more reliable for this purpose in poor countries.

Recognizing this difference in weights, the ICP’s global office (based in the World Bank) initiated work on the 2005 ICP to create alternative “PPPs for the poor” that are re-weighted consistently with household surveys. This work is documented in a paper by Angus Deaton and Oliver Dupriez who constructed a new set of 2005 PPPs that accorded better with the consumption patterns of people living near the international poverty line, based on surveys. As it turned out, there was not much difference between the PPPs for the poor with the standard PPPs based on national accounts for 2005.

Here we are asking a different question: does the difference in weights help us understand the large discrepancies between how PPPs have evolved between ICP rounds and how domestic price indices have changed? We would not expect the difference in weights to matter if the relative price of food changed little between the last two ICP rounds 2005 and 2011. But (as we all know) that was not the case. There was a sharp rise in the relative price of food globally during the period 2008-2011; indeed, the sharp increases in food prices in both 2008 and 2010 were dubbed “food-price crises,” given the concerns about the short-term welfare impacts on poor food consumers across the world.

Poorer countries were more exposed to the food price shock. For example, if one focuses on the poorest quarter of countries (ranked by consumption per person in 2011) the food price index produced by the International Labor Office (ILO) indicates a (cross-country average) 15.2% annual rise in food prices, as compared to 4.7% per annum for non-food goods and 10.7% for the overall CPI. For the other three-quarters of countries the average inflation rate for food was 7.7% per annum over 2005-11, while that for non-food was 5.3%; the overall CPI inflation rate for these countries was 6.0%.

With the help of World Bank staff, we have collected the data needed to address this concern. For as many countries as possible, the following figure gives the food Engel curve, in the form of the (non-parametric) regression function of the food share on log total consumption per person. This is constructed in two ways. The first (starting from the bottom) is the Engel curve implied by the expenditure share of food (and non-alcoholic beverages) in the household consumption PPPs from the 2011 ICP. (This is calculated from the ICP public tabulations found here; the food share is the GDP share attributed to household expenditures on food and non-alcoholic beverages divided by the GDP share accounted to individual household consumption, both of which are found in the ICP’s Table D2.) The second is average food share in the closest available household survey, with no survey older than 2006. The median year of the surveys is 2011. (The calculations were done by World Bank staff mainly using the micro data.) 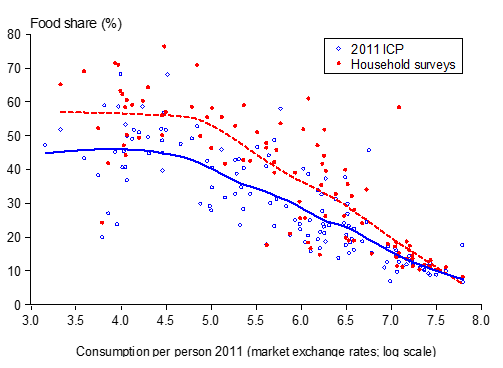 We see that there is a sizeable gap between the two Engel curves. Continuing with the example of India, the ICP food share is 30%, as compared to 52% and 44% for rural and urban areas respectively (based on India’s National Sample Survey). As expected, the gap falls as mean consumption rises (and hence the food shares fall). For the poorest quarter of the sample—up to log consumption per capita of 5—the gap is an average of 11.3 percentage points (with a standard error of 1.7%). That is a huge discrepancy. By contrast the gap for the other three quarters of countries is 5.6% (standard error of 0.9%). The gap goes to zero amongst rich countries.

This is clearly a concern for the claims that the 2011 ICP data imply lower global poverty and inequality than has been thought. By under-weighting food relative to national deflators for poor countries, the new PPPs are almost certainly over-stating real income levels in those countries relative to past data.

Blog Post
After COVID-19: How to Pull Off the SDG Hat-Trick?
Christopher Hoy and Andy Sumner