Separate Legal Identity and Birth Registration in the Post-2015 Agenda

September 16 officially kicks off the 69th session of the UN General Assembly and the one-year countdown for negotiations of the successor framework to the Millennium Development Goals (MDGs). The latest input into the post-2015 process from the UN Open Working Group includes 17 goals and 169 targets; by way of comparison, the current MDGs include 8 goals and 21 targets. As has been discussed, some serious pruning is in order. But amid the plethora of targets, many good ideas exist, and one of them is a call for universal legal identity including through birth registration. (See below for other good ideas.)

While this target has appeared in multiple inputs to the post-2015 process, its formulation is problematic. As our new policy paper points out, legal identity and birth registration should not be conflated into the same target because they require distinctly different implementation strategies. Perhaps most importantly, they differ in what is realistically achievable by 2030. We argue that practical, achievable targets would be universal legal identity and a proportional reduction in unregistered births, such that:

Why have two different targets for what seems to be the same issue?  Consider the following picture that shows the progress of different regions in decreasing unregistered children since 2000. 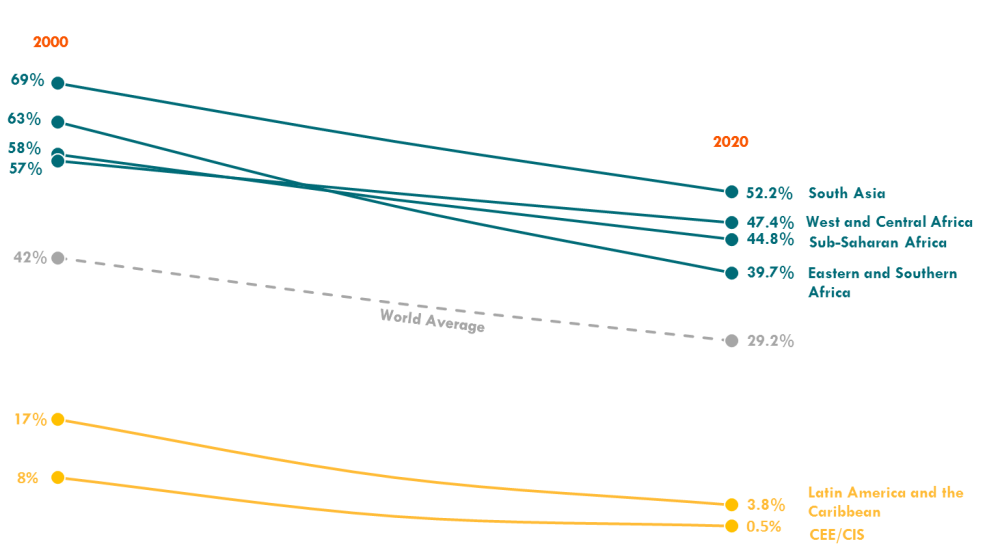 While 100 percent coverage for birth registration is a good aspirational aim, it is less useful as a yardstick to measure and monitor progress in the face of widely varying levels and progress across countries. A target to at least halve the percentage of unregistered births by 2030 would be a substantial challenge for countries with very low registration rates, though relatively easier for those with initial registration rates over 50 percent. Such a goal would yield overall regional targets of approximately 72 percent for South Asia and 76 percent for Sub-Saharan Africa (assuming for simplicity the distribution of births is constant across countries).  Though short of 100 percent, these targets would represent a more than doubling of past progress in closing the gap.

In contrast, a legal identity target would cover a different population through different pathways. A complete legal identity target must take into account those who have previously been left out of the system, including the roughly 750 million children still under the age of 16 whose births have not been registered, as well as the new births that will fail to be registered until total coverage is achieved.  While there is not one model of legal identity across countries, the goal of universal legal identity would require states to ensure that all have free or low-cost access to widely accepted and robust identity credentials.

It is critical to calibrate these targets correctly.  Legal identity and birth registration can directly improve the quality of people’s lives: as a basic human right and a pathway to accessing crucial services in health, education, and the formal economy.  They can also have an indirect effect on improving the quality of governance in many countries. Good data on births, deaths, and the incidence of disease allows governments and donors to effectively allocate their resources and improve people’s lives, and it allows citizens to hold their governments accountable to these commitments.

Michael Clemens expresses his excitement over migration policy finding space in the post-2015 agenda. Why? Migration is the most profitable investment available to the world’s poor, and remittances sent home far outweigh foreign aid. It can also do more to address world inequality than current drafts suggest. Read more

Amanda Glassman says countries should drive the data revolution from the bottom up, but describes four areas where the high-level post-2015 process could help support and accelerate progress in national statistical systems. Read more

Charles Kenny asks what’s the point of the post-2015 agenda, given the lack of prioritization in goals and targets so far. “It would be a huge step if the Secretary General’s upcoming synthesis report actually laid out the rationale and purpose of the post-2015 goals in a way that doesn’t suggest they are designed to be all things to all people.” Read more

Lant Pritchett argues that the focus on extreme poverty goals effectively removes improving the lives of billions of the world’s poor from the development agenda. “The battle for 2015 will be between the elite countries’ attempt to ‘define development down’ to a narrow, extreme poverty–focused agenda and the rising power of the billions in the rising global middle class and their countries to have their desires for prosperity—in all its forms—fulfilled.” Read more