‘Taxing across Borders’: An Academic Milestone

A new paper from Gabriel Zucman (of London School of Economics, and erstwhile co-author of Thomas Piketty) in the (free-to-view) Journal of Economic Perspectives represents a milestone in the academic economics literature. As far as I’m aware, it is the first major journal paper that aims to put a specific scale to both corporate tax distortions via ‘tax havens’, and the evasion of individual income and wealth taxes through offshore ownership. This post sets out the main findings of the paper and briefly discusses its policy proposals.

The bulk of the paper deals with corporate tax avoidance, and contains substantial new analysis of profit-shifting by US-headquartered multinationals. The story is built up in five figures. First, Zucman shows that the share of all US corporate profits declared as earned outside the US has risen steadily in the post-war period. 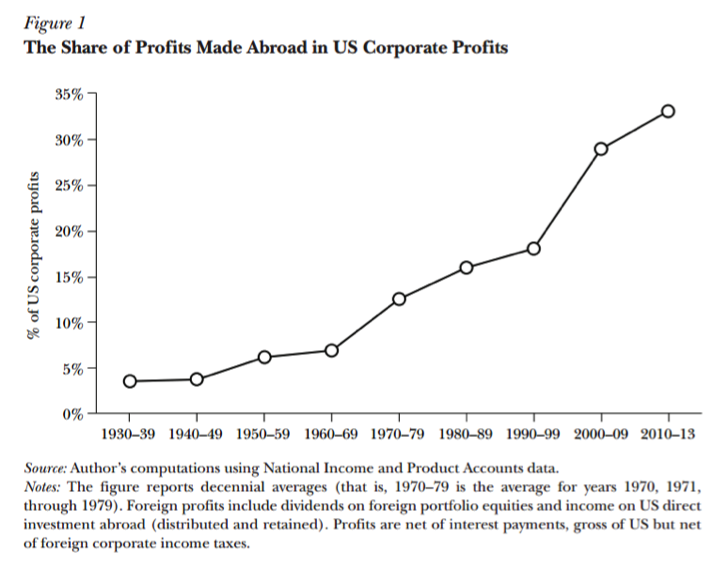 Second, Zucman shows that the share of those foreign-earned profits declared as earned in a group of jurisdictions he labels ‘tax havens’ has grown especially sharply – to over half by 2013 (or from around 2% of all US corporate profits in the mid-1980s, to over 20% at its 2008 peak).

The share of US MNE profits retained in’ ‘tax havens’ has also risen: nearly four-fold since the 1980s, towards 40%. 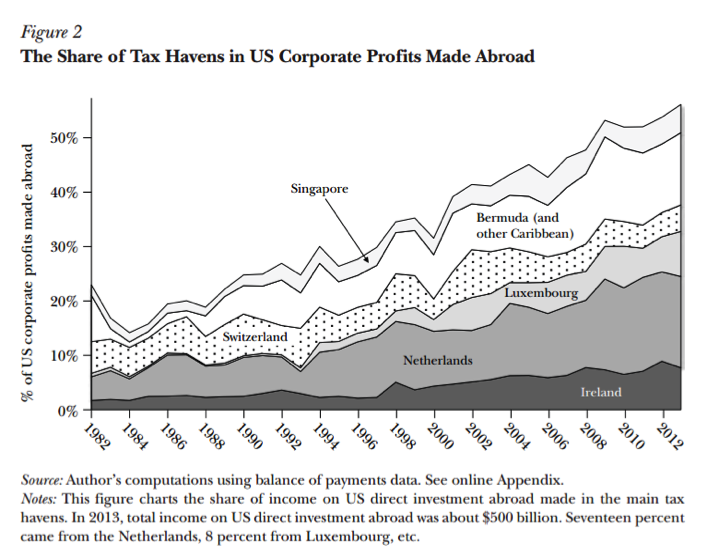 Zucman then shows that the effective tax rates on US corporate profits has fallen consistently in the post-war period, but with an important change. 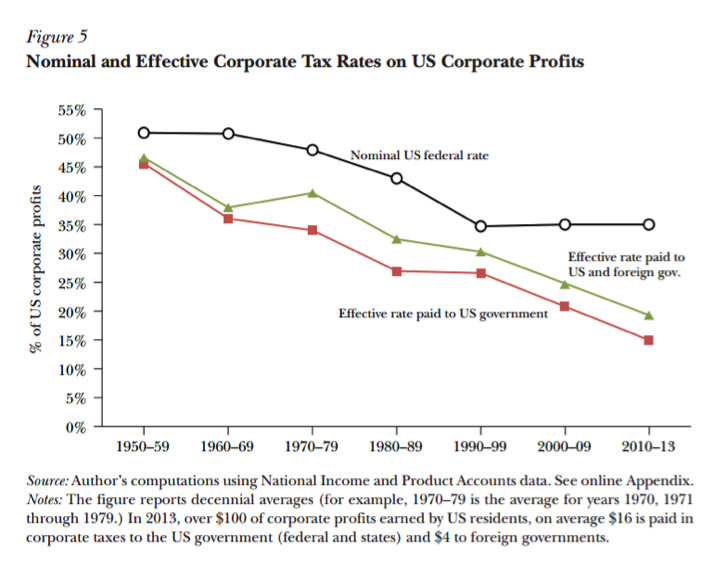 From the 1960s to the 1990s, the nominal tax rate was also falling – so a falling effective rate may be broadly consistent with the policy intention. From the 1990s onwards the nominal rate has been stable, but the effective rate paid has continued to drop steadily – so this is less obviously a deliberate policy choice.

The other element of the analysis deals with tax evasion through offshore wealth holdings, and draws on earlier work. There are two main points here. First, Zucman shows that the share of US equities held by individuals or through firms based in a group of ‘tax haven’ jurisdictions has risen from 2% or less in the 1980s, to exceed 8% now (with no discernible change due to the financial crisis). 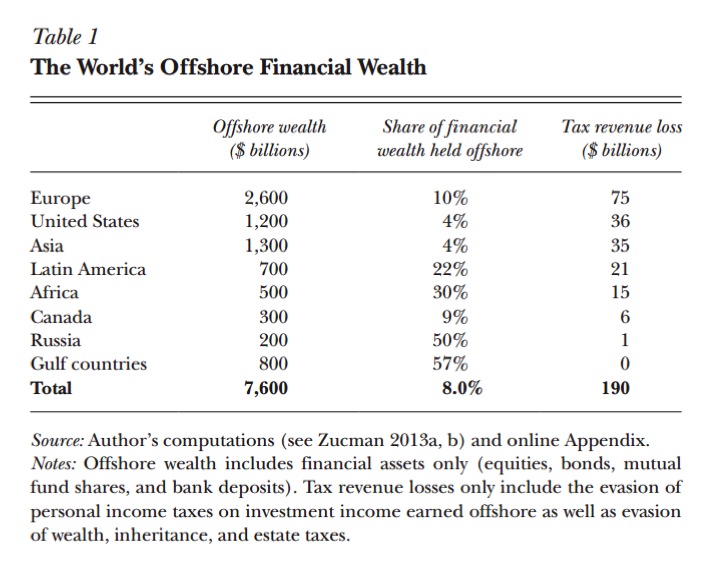 The second part of the analysis is a global estimate of the total offshore holding of wealth (in this case, not in a particular group of ‘tax havens’, but in all jurisdictions other than the home country). [Of course, holding assets ‘onshore’ also allows in many cases – not least the US – for great opacity and tax manipulation too. See e.g. this new paper from Jason Sharman and co-authors that continues his great work of showing the extent to which OECD economies lag the ‘usual suspect’ havens in, for example, the risk attitude of company formation agents when unknown parties seek to breach beneficial ownership identity requirements.]

The identified offshore wealth holdings are estimated at $7.6 trillion. Data from the Swiss authorities, as presented in earlier work by Zucman and Niels Johannesen (see Fig.7 here), is then used as the basis for an assumption that 80% of offshore assets are undeclared, which in turn gives rise to an estimated tax loss of c.$190bn.

Zucman makes two main policy proposals: corporate tax reform, and a world financial register. On the former, he considers and dismisses OECD BEPS attempts to fix current system, along with formulary apportionment options. Instead, Zucman argues for (re)integration of corporate and individual income taxation, within the more complex reality of globalisation – even although attempts at integration were largely dropped over time as this complexity developed.

The way that Zucman proposes to make this work is through a major shift in information provision and use, through the creation of a world financial register – Piketty’s major proposal in Capital (which I’ve enthused about before, for its spirit of democratic and financial transparency). Zucman here calls it “a transparent way to enforce a fair distribution of corporate tax revenue globally and thus make an imputation system work in a globalized world.” He then considers and dismisses counter-arguments around cost, complexity and obstructive financial secrecy. (On cost, by the way, my limited cost-benefit analysis of national registers established globally may be of interest.)

Each of these proposals deserve – and I hope, will receive – substantial attention.

Last word, not the last word

The paper itself is a great contribution, pulling together elements of Zucman’s work into a single, powerful argument. In doing so, it also confirms the difficulties of attributing anything more than approximate scale on the basis of current data. By that I mean that the approaches taken are either somewhat partial (what of other jurisdictions’ multinationals?), and/or rely necessarily on extrapolations (for example from Swiss data on asset declarations to the global level); and in addition, inevitably, on assumptions about returns and implicitly about counterfactuals. To be clear, these points are not meant as criticisms; rather, they are additional confirmation that this kind of work requires such steps – as various recent pieces have argued. Researchers simply need to be clear, and open to criticism (as Zucman is), about the steps being taken.

So while it certainly isn’t the last word about the scale of either corporate tax avoidance or offshore tax evasion (and I may write a more critical review of some technical points later), Zucman’s paper marks an important milestone in the development of rigorous academic research in these areas.