Two Years On, and No End in Sight: How Should We Respond to the Rohingya Crisis in the Medium-Term? | Center for Global Development | Ideas to Action Skip to main content

Two Years On, and No End in Sight: How Should We Respond to the Rohingya Crisis in the Medium-Term? 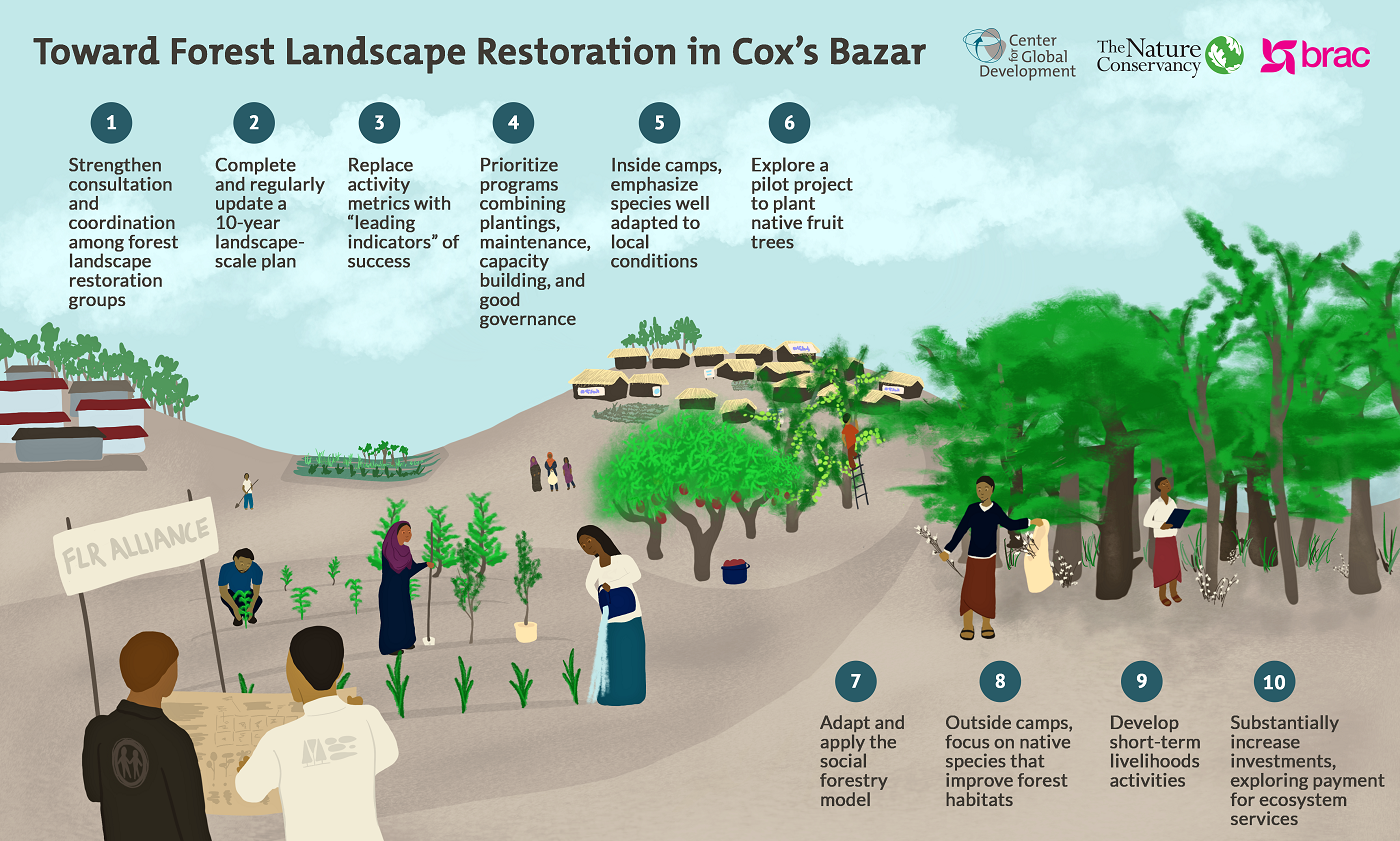 Medium-Term Solutions for Rohingya Refugees and Hosts in Bangladesh
June 25, 2019

This Sunday marks two years since Myanmar’s military dramatically escalated its systematic campaign of violence against the Rohingya, causing over 700,000 of the long-persecuted and stateless population to flee to Bangladesh—the fastest exodus of refugees since the Rwandan genocide. The United Nations human rights chief said the violence was a “textbook example of ethnic cleansing,” and a UN fact-finding mission concluded that military leaders should be investigated and prosecuted for genocide, crimes against humanity, and war crimes.

While Bangladesh and Myanmar have recently tried to begin a “small-scale” repatriation attempt, it is inconceivable that significant numbers will return to their home in Rakhine state under the current circumstances (previous efforts failed as refugees refused to go back). Conditions in Rakhine continue to deteriorate, the UN High Commissioner for Refugees is denied access, and the UN’s resident coordinator for Myanmar recently threatened to suspend aid over the government’s “policy of apartheid” against Muslim communities.

The safe, voluntary, and dignified return of the Rohingya—the ultimate solution to the crisis—is contingent upon actions to secure justice and accountability for Myanmar’s atrocities, alongside policy reforms to guarantee their citizenship, freedom of movement, and livelihoods in Rakhine (informed by refugee perspectives). But even if repatriation began tomorrow, estimates suggest a significant number of refugees would remain in Bangladesh over ten years from now. The international community and Bangladesh can’t afford to just plan for the short term.

The components of a medium-term strategy

As new conflicts and crises emerge, and donor fatigue looms large, the international community must transition from a short-term, aid-oriented response toward an approach that provides actionable and concrete responsibility-sharing commitments to support Bangladesh. These commitments would recognize the global public good Bangladesh is providing and would enable the country to continue its impressive development trajectory.

Over the last two years, we have been investigating what a “medium-term strategy” could look like, along with colleagues at the International Rescue Committee (IRC), BRAC, The Nature Conservancy, and the Richardson Center. After numerous field visits and interviews with affected populations, donors, implementing agencies, and government officials, we developed a strategy with three main components: stimulate private sector investment, promote employment-oriented skills development, and accelerate forest and landscape restoration.

Critically, these efforts must be pursued alongside continued humanitarian aid, which remains essential; actions to secure justice, accountability, and policy reforms for sustainable return; and complementary policy changes to ensure refugees and host communities both benefit and to foster social cohesion as Bangladesh continues to generously host the Rohingya. Policies that prevent refugees from moving outside of the camps, working, and gaining an accredited education hamper their ability to become productive members of the local community and potentially stifle the sustainability of refugee returns to Myanmar, when that becomes possible. In host countries, these barriers often lead to the negative outcomes (such as lowered wages) that they aim to avoid in the first place. Refugee rights should be incrementally expanded to deliver inclusive growth for refugees and hosts.

We will be publishing deeper dives into each of these components over the next few months, as well as a synthesis report which sets out this strategy in full.

Bangladesh has sustained impressive economic growth and is set to graduate from least developed country status by 2024. Yet the government’s ambitious goals will be constrained by lagging investment and foreign direct investment levels, and poor productivity, business environment, and labor protections.

To support Bangladesh in its growth efforts and to share some of the costs of the Rohingya crisis, the private sector should focus on ideas that have a self-sustaining business case, potential for employment, and cross-sectoral interest, such as:

To help realize these initiatives and spur investment in additional sectors, donors and the government should collaborate on investor facilitation, concessional financing, technical assistance, and disaster risk insurance.

Both the projects detailed above, and growth in sectors abroad, represent an opportunity for Bangladeshi workers (and consequently, the Bangladeshi economy) to profit from formal job opportunities with higher wages. However, to ensure workers, particularly those in Cox’s Bazar, can take advantage of these opportunities, targeted job and vocational skills training is needed. Our medium-term plan focuses on two programs that directly link formal employment to targeted skills development:

Refugees could participate in both of these programs, gaining skills to help facilitate a sustainable return where they are more capable of supporting themselves.

Among the most immediate impacts of the refugee influx was deforestation in the areas around the Kutupalong-Bulukhali settlements. These environmental losses created a fuelwood shortage, sparking tension among refugees and host communities. With The Nature Conservancy and BRAC, we identified a number of core recommendations to improve forest landscape restoration, promoting both human and environmental well-being, such as:

We’re pleased that parts of our recommendations have been reflected in new planning documents and we hope they will inform future humanitarian responses to integrate environmental expertise early on in planning, thus preventing harm from occurring in the first place.

It is important to commend the Bangladeshi government for its generosity, and recognize the effective response of the international community, providing lifesaving aid and protection to a highly vulnerable population. Key recent successes include a joint effort to provide over half a million refugees with ID cards, the government’s approval of the first two of four levels of an informal learning framework, and donors prioritizing programs to mitigate social tensions.

But there is a limited window of opportunity to shift from a short-term, crisis-mindset towards an approach that recognizes the realities of protracted displacement, learning from the experiences of other host countries to generate inclusive growth for refugees and hosts. Our outline for a medium-term strategy can be the start of a constructive, multi-stakeholder dialogue, aiming to improve outcomes for Bangladesh, its citizens, and the Rohingya refugees. The time to act is now.

As part of our efforts to understand what a medium-term response to the Rohingya refugee crisis could look like, we are publishing five papers covering forest and landscape restoration, trade, private sector investment, labor mobility, and policy priorities, as well as a synthesis report. The first has already been published, while the rest will be published between now and December, when we will convene at the Global Refugee Forum in Geneva. For more information about the project and our initial findings, please email Nicole Cassou (ncassou@cgdev.org).

We are grateful to Helen Dempster, Lauren Post, and Steve Ross for their thoughtful comments and contributions. All errors are our own.