By and large, citizens of wealthier countries have more access to financial services than citizens of poorer countries. In the Republic of the Congo, for instance, only 9 percent of adults have access to formal financial institutions. In high-income countries, that share is 90 percent, according to World Bank calculations.

Latin America presents a bit of a puzzle: when compared to other countries with similar degree of real income per capita, Latin America’s degree of financial inclusion is nearly 40 percent lower. I and my co-author analyze that gap in a CGD working paper and find that institutional deficiencies and income inequality are the most important contributors.

Increased access to financial services can have significant effects on welfare and can help reduce poverty. Financial inclusion allows individuals and firms to reduce the costs of making transactions and to move away from short-term decision making toward a more far-sighted allocation of resources. As argued by Allen et al., there is significant evidence supporting the positive effects of having a bank account on individuals’ saving and investment behavior.

What explains Latin America’s Financial Inclusion Gap? That, is the difference between the average financial inclusion for Latin America and the corresponding average for a set of comparator countries? In our paper, Maria Alejandra Amado and I explore this issue using both country-level data such as rule of law and income inequality and individual-level data such as education.

At the country dimension, we find that, while a number of factors can account for the absolute level of financial inclusion, institutional deficiencies and income inequality are the most important obstacles behind Latin America’s financial inclusion gap. While these findings are derived formally in the paper using statistical methods, the graphs below illustrate these results. 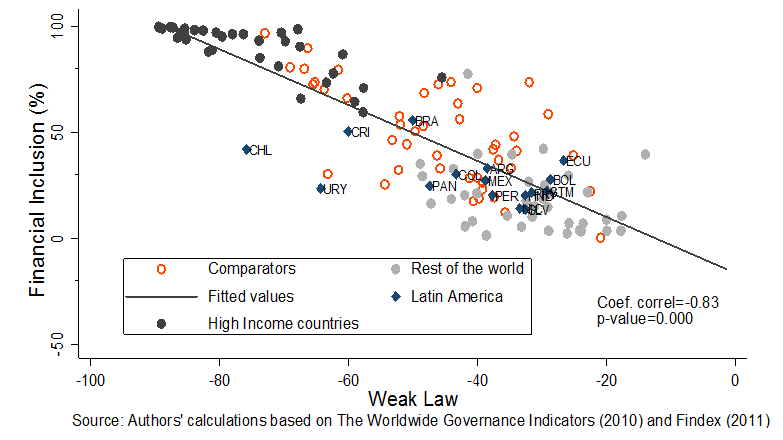 Figure 1 shows the correlation between financial inclusion and an indicator of a country’s quality of institutions, the rule of law component of the World Bank’s governance indicators, which measures individuals’ confidence in and commitment to abiding by the rules of society, the quality of contract enforcement, the police, the courts, and the likelihood of crime and violence. The indicator is rescaled so that higher values (lower negative numbers) indicate lower quality of institutions. We call this indicator weak law. The negative relationship in the graph implies that the weaker a country’s rule of law is, the lower the percentage of a country’s adult population that has an account in a formal financial institution.

As expected, high-income countries, denoted by black dots, are concentrated in the upper left corner of the graph, indicating that high institutional quality in developed countries is consistent with high levels of financial inclusion. In contrast, most Latin American countries (the clear exception is Chile) display very low institutional quality and very low financial inclusion. Moreover, relative to its comparators (marked with red dots), Latin American countries do not stand favorably. Weak law in the median Latin America country is –35, while it is –44 in the median comparator country.

The results are even more dramatic when correlating financial inclusion with income inequality, as measured by the Gini coefficient. As figure 2 below shows, there is a negative relationship between these two variables. It is quite likely that the provision of financial services is relatively easier in more egalitarian societies since financial products can be more uniform across a large majority of the population. Latin American countries are largely concentrated in the lower right corner of the graph. While the median value of the Gini coefficient for Latin America equals 51.4, the corresponding value for the comparators is much lower: 39.2 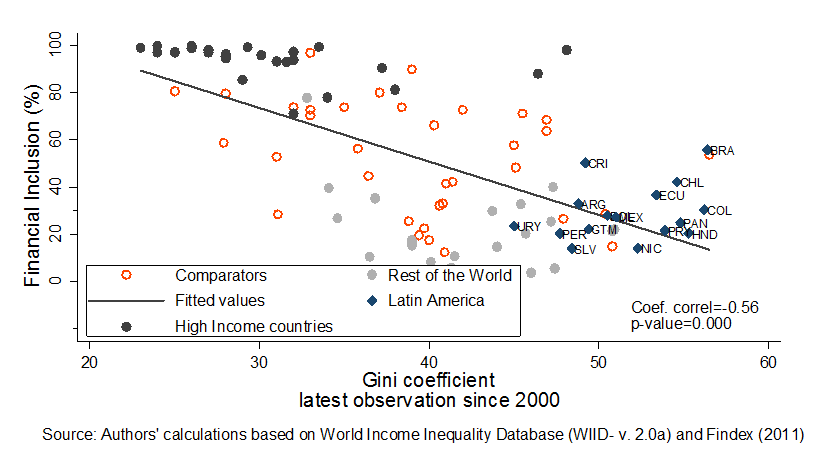 From our analysis using individual-level data we find that the effect of attaining secondary education on the probability of having access to formal finance is significantly higher in Latin America than in its comparators. That is, while higher educational levels support financial inclusion for all country categories, the chances of financial inclusion that an individual faces by completing secondary education are higher if the individual is from a Latin American country rather than from the region’s comparators.

The policy lesson is straightforward: In addition to designing financial innovations to reach the poor, policymakers interested in improving financial inclusion in Latin America need to focus their efforts towards improving the quality of institutions, lowering the degree of income inequality, and making serious strides in educational achievements. Lacking these factors, Latin America’s degree of financial inclusion might continue lagging behind that attained by countries with similar levels of income per capita.

Blog Post
The Economic Impact of COVID-19 around the World: A Round...
Amina Mendez Acosta and David Evans