Using Aid for Cash Transfers: What Do 10,000 People in 28 Countries Think?

Cash transfers might be the next big thing in international development. Rather than spending money on technical assistance or in-kind aid, we can transfer money directly to people in need, making our assistance more effective and often much cheaper. The tenor of the discussion on cash transfers has shifted from ‘whether’ to ‘how’ in development agencies. But has public opinion kept up?

The recent World Humanitarian Summit called for increasing the share of aid given as cash. Agencies like the IRC and World Vision committed to hard targets for the shares of their aid they will deliver as cash. And a high-level panel convened by CGD and the Overseas Development Institute concluded that cash transfers are an effective, efficient, and equitable way to assist people in the majority of emergency situations.

Yet many people think that spending money this way is risky. Rather than using aid for education or to put food on the table, the reasoning goes, households might waste it on things like alcohol or cigarettes. Frontline agencies and donors depend on political endorsement from taxpayers—if public opinion shifts against cash transfers, it would imperil the fragile consensus emerging in their favour.

Our analysis of new survey data suggests that support for cash transfers is modest and fragile. Donors—who are poised to leverage a promising new way of delivering aid to do more good for less money—must continue to make the public case for cash transfers, and continue to present the remarkably strong evidence that they are not misspent.

We were fortunate to work with Dalia Research, a Berlin-based startup, to poll the European public about cash transfers. Dalia’s secret sauce is designing large-scale internet surveys that capture a cross section of European society without over-representing a single group or country. They typically rent their services to top-tier news organisations but have an interest in public policy and international development, so kindly agreed to let us add a small number of questions to a recent survey round in March.

Original survey data from 10,000 respondents across 28 European countries shows a heartening, albeit modest, level of support for cash transfers. On average, people choosing how to split up €5 in aid between cash and traditional in-kind aid would spend €1.9 of it as a cash transfer when the money is spent on ‘good’ things. But our data also show a steep decline in support if there’s a perceived risk that even some of that money will be misspent. When some of the cash might also be spent on something bad, the average choice of how much to allocate as cash drops to just €0.9.

We asked respondents to decide how much of €5 in foreign aid should be spent as a cash transfer when some of the cash would be spent on schooling and food, and, as a follow-up question, when the cash would be spent on schooling, food, and some on alcohol. Asking the ‘schooling’ question first gives us a sense of the preference for transfers when they are spent on something people consider good; that enables us to compare support for cash when, in the second question, there’s a risk of ‘some’ misspending on something bad. Asking the questions in this order every time does create a risk that respondents are primed to punish recipients, but due to the structure of the survey, we couldn’t investigate this further.

The overall effect of introducing this risk of misspending is dramatic. Looking at raw percentages in our sample of 10,000 respondents, support for cash transfers erodes precipitously, moving from the blue bars to the red ones. 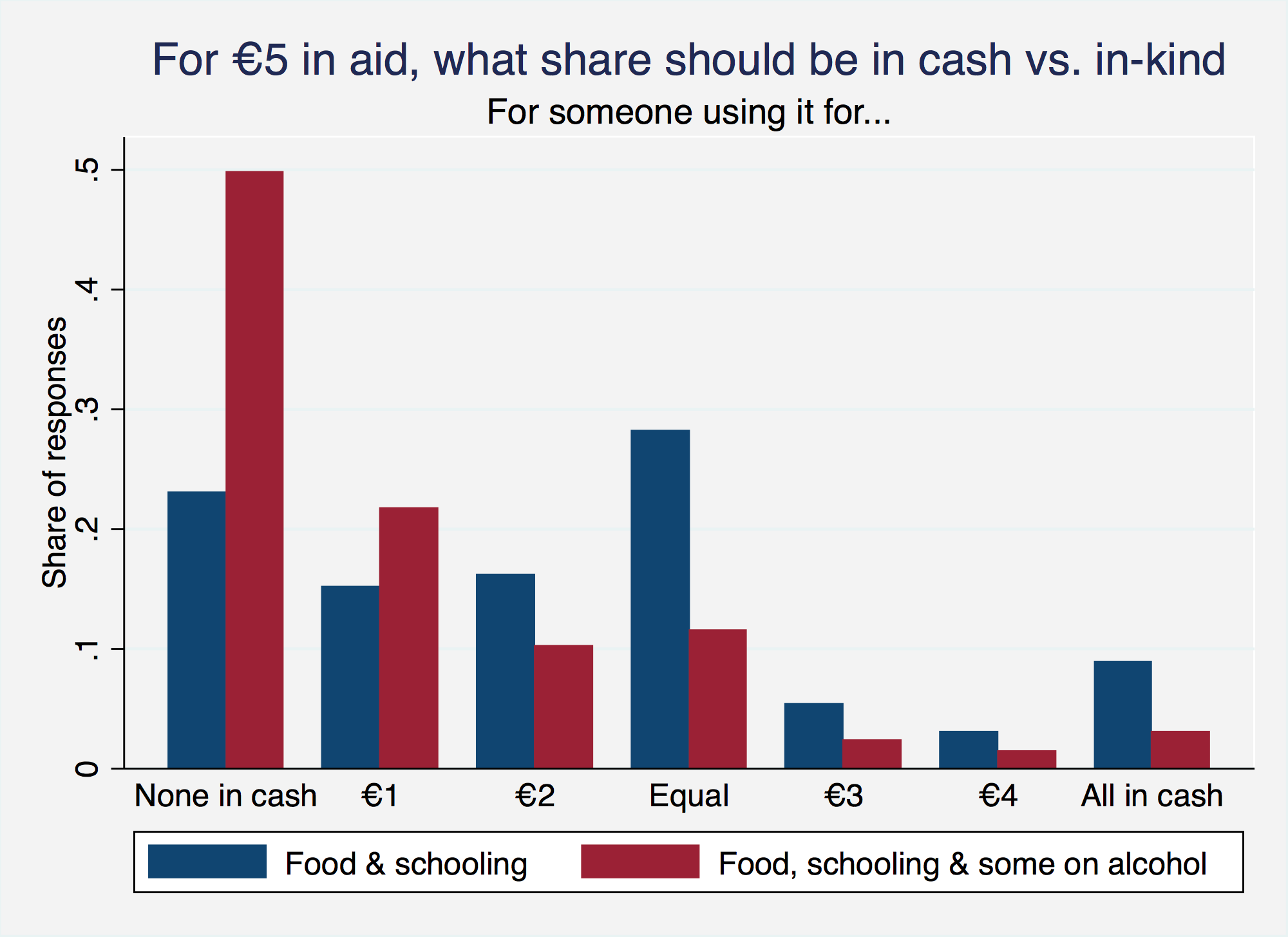 The perception of misspending causes a steep discount at every level of support. The bar graph below shows the average level of support for cash when recipients spend a little on alcohol, divided up by how many euros allocated to cash when it was only spent on schooling and food. There is a hefty ‘penalty’ for misspending, regardless of the initial level of support for cash transfers. For example, people who would allocate the whole €5 as cash at first (the rightmost bar) drop their support to an average of €2.1– nearly a 60 percent decline– when the risk of ‘misspending’ appears. 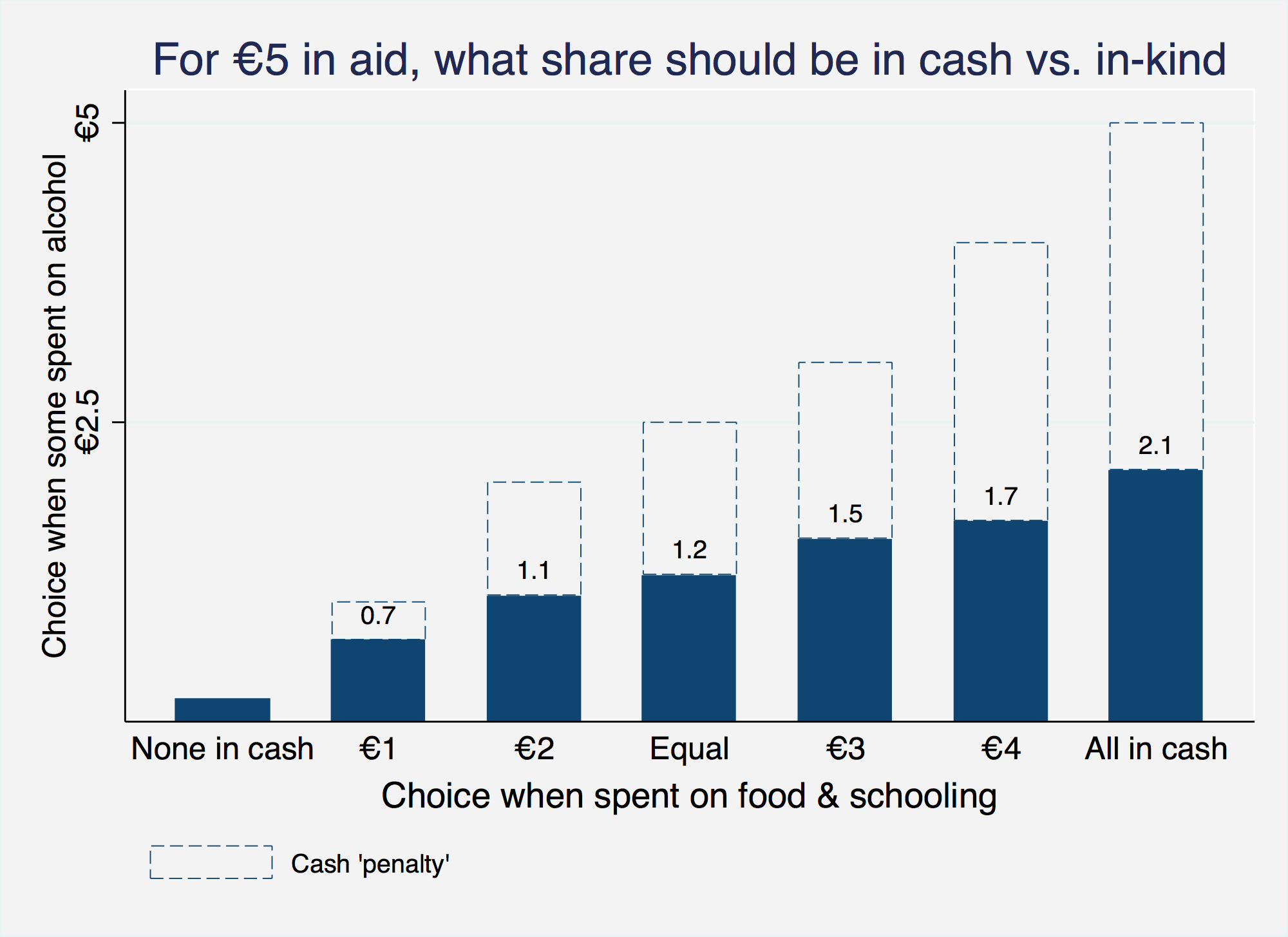 One of the features of survey data is that we also get demographic information about respondents. Those characteristics could be hiding valuable correlations.

For example, our (biased) view before doing this analysis was that older people are reluctant to give aid in cash. Is that accurate?

The figure below compares the ‘effect’ of different characteristics on preferences for aid as cash, both when it is spent on schooling and when we introduce the possibility it is spent on alcohol. The results show that older people are generally less willing to give aid as cash, and are even less forgiving when money is spent on alcohol. People who report being better educated support giving more of the €5 as cash, but this largely vanishes when alcohol is mentioned. The survey also asked people whether people thought their country’s economic outlook would improve over the next year or not. Initially, people who were optimistic were not consistently more likely to favour cash, but when alcohol was mentioned, it was the optimists who were more forgiving. 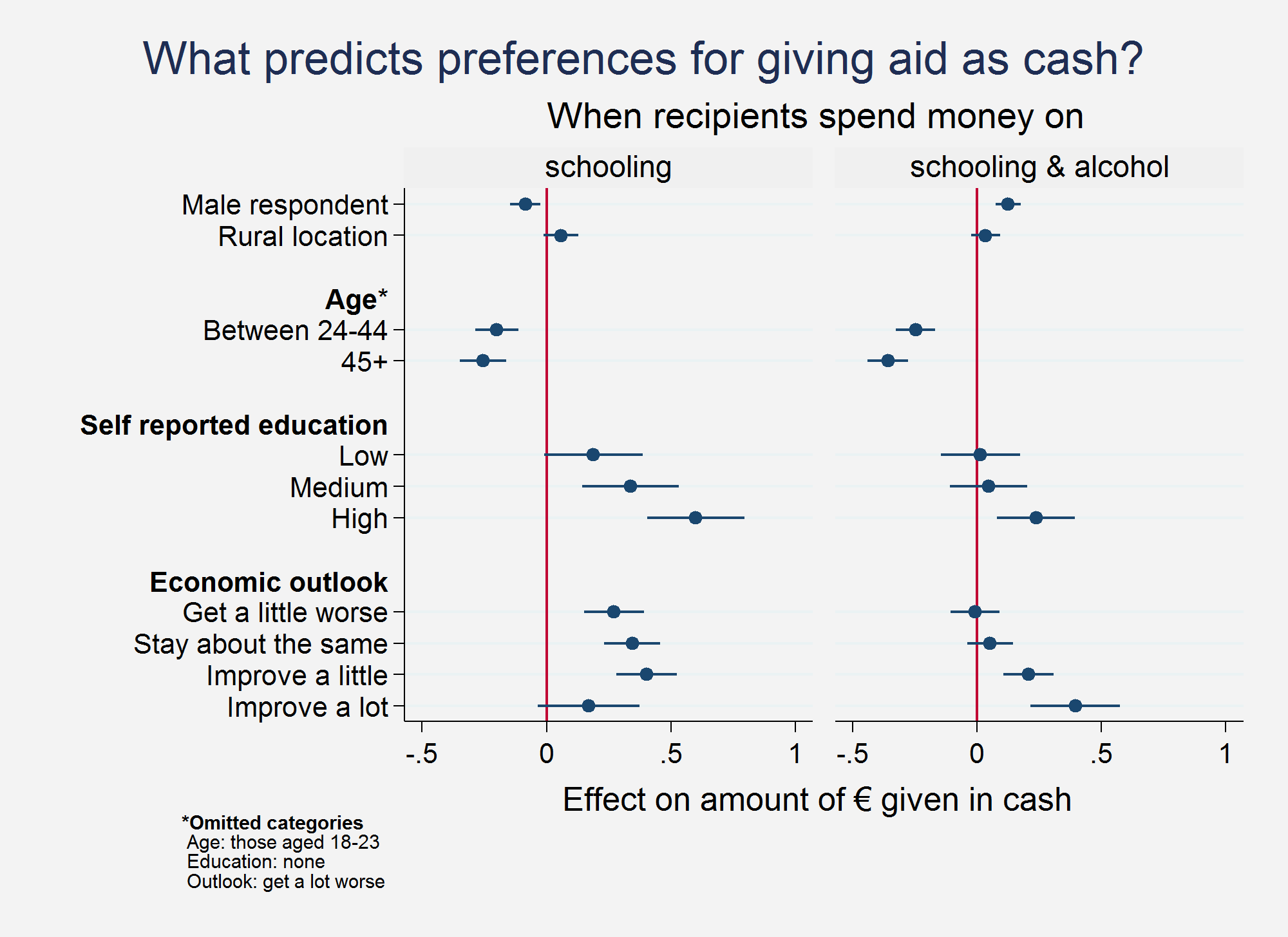 Finally, men were less willing than women to give aid as cash when it would only be spent on food and schooling. But they are consistently more likely to support cash transfers when recipients might buy alcohol. This is either a quirky result or an unexpected demographic in favour of cash transfers that we should be racing to leverage. Bros for Development, anyone?

Considering voters’ and taxpayers’ preferences for how aid is spent is not academic navel-gazing: development professionals have coasted on the presumption of public support to their detriment before. Since 1974, the Netherlands had been a leading donor, meeting or exceeding the international target for spending 0.7% of GNI as aid. That ended in 2013, when the right-leaning Volkspartij voor Vrijheid en Democratie announced it was withdrawing support for the target, setting off a stampede for the exit as other parties followed suit. Spending is trending down, possibly reaching 0.5% by 2018.

The lesson here is that consensus around aid or types of spending is fragile. It falls to the global public sector to deploy transparency, evidence, and old-fashioned persuasion to convince electorates that cash transfers are a better way of doing business. The evidence is on their side: cash transfers are probably the most rigorously evaluated type of development intervention in history. Though some households spend some of their transfers on things like booze or cigarettes, that share is vanishingly small (indistinguishable, in many cases, from statistical noise). And the effects on outcomes ranging from female empowerment to children’s educational attainment are consistently both large and positive.

Cash transfers can save money and time, support local entrepreneurship and markets, and deliver strong development outcomes. Responses from this Europe-wide survey suggest that in order to realise these gains, donors and humanitarians must keep working hard to bring public opinion along with them. And history suggests that failing on this point risks losing the mandate to push ahead with a potentially transformative means of tackling deprivation and poverty overseas.

You can download the Stata .do file we used to clean the raw data and produce these graphs. Dalia asked us not to share the respondent-level data. If you’re interested in using it or in learning more about them, please get in touch with Niklas Anzinger at niklas.anzinger@daliaresearch.com.

Blog Post
And the World Leader in Mobile Money Adoption is… (Not...
Kyle Navis

New results from a famous experiment in Kenya have sparked heated debate over whether lump-sum cash transfers have any long-term benefits for those who get them, or even do harm to neighbors who don’t.