What Next in the International Financial Response to the COVID-19 Crisis?

A generous reading of the recently convened meetings of the IMF and World Bank, and the associated meetings of the G7 and G20, is that everyone recognized the unprecedented nature of COVID-19 pandemic and its consequences for development and poverty: the international financial institutions (IFIs) took encouraging steps to increase their financial contribution and the G20 managed to agree on a useful, if limited, debt standstill for the poorest countries. A less generous observer would note that the steps taken and the commitments made fall woefully short of what will be needed to mitigate the impact of this pandemic on development progress. A glaring disconnect also remains between the spend-what-it-takes approach that rich countries have (rightly) adopted at home and what they seem unprepared to do to tackle this crisis in the rest of the world. No country is safe if the pandemic rages elsewhere in the world.

Wherever you come out on the outcome of the Spring Meetings, what should be the priorities for action now? What limited number of items should policymakers focus on to deliver both the immediate relief that developing countries need and to prepare for the fundamental reconfiguring of development finance that will likely be required after this battle is over? In setting out this agenda for action we need to be mindful of three inconvenient realities:

In that spirit, I set out below a two-track agenda for action now. The first track lays out the three actions that will ensure maximum relief for developing countries in the next twelve months. The second aims at preparing the three most impactful systemic change proposals that can be enacted as soon as political consensus is achieved.

Operationalize the proposed debt service relief for the 77 poorest countries. The G20 agreement quickly needs to be translated into cash flow relief at the country level. The IMF and World Bank need to engage with each eligible country and the bilateral creditors (working with the Paris Club) to agree on amounts and timing and to call out attempts by any creditor to cut back on coverage or to reach opaque side agreements. We also need to discuss to what extent, and how, to extend debt suspension proposals to private sector debt.

Set out a framework for dealing with debt difficulties in selected middle-income countries. A generalized moratorium on debt service for middle-income countries is neither feasible nor desirable. However, a dozen or more emerging markets may well run into debt servicing problems in the coming year. Each will need to be dealt with as a specific case, but the process will be much easier if there is already a framework and forum that brings together the main creditors. The IMF needs a clear mandate to lead the framework in each country case, to convene the relevant players, and set broad parameters for resolution through its debt sustainability and policy analysis.

These rules make sense in normal times but given the nature of the crisis, they are no longer appropriate and the IFIs need to find ways to adapt them to deliver the necessary response.

Ensure that the IFIs deliver substantial net financing in the coming year to each affected low- and middle-income country. The IMF, World Bank, and other public development banks have all committed to provide additional funding in response to the crisis and delivered on the first round of new loans for a significant number. No doubt, by the end of the year the aggregate number for new commitments will be substantial. However, it is important to ensure that this aggregate does not conceal anomalies that leave some countries behind. In particular, for about 40 countries repayments to multilateral institutions are the largest share of debt service due in 2020-21. 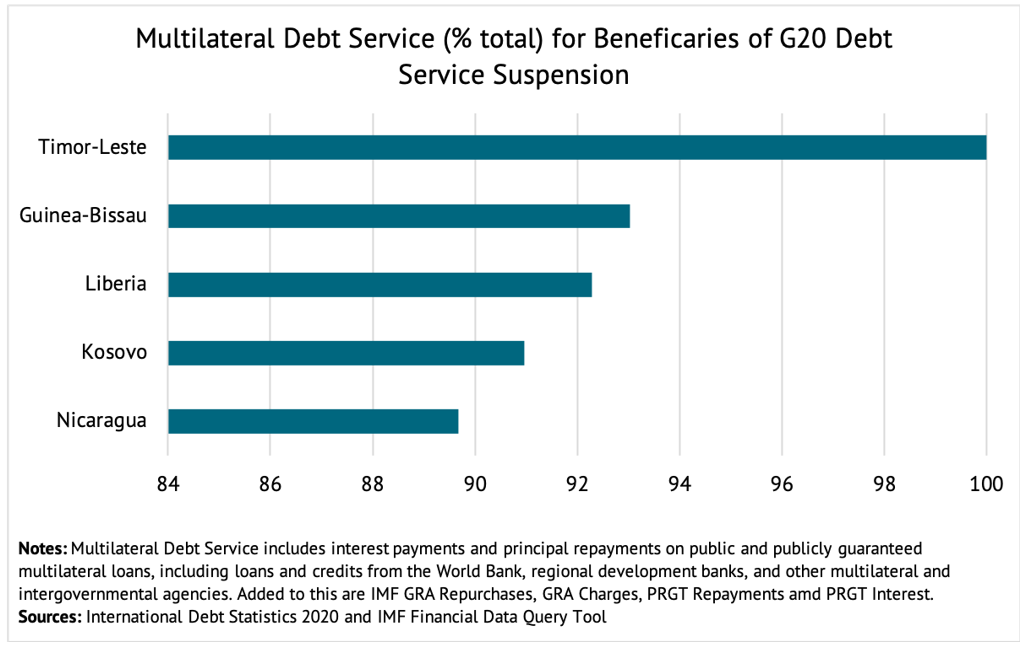 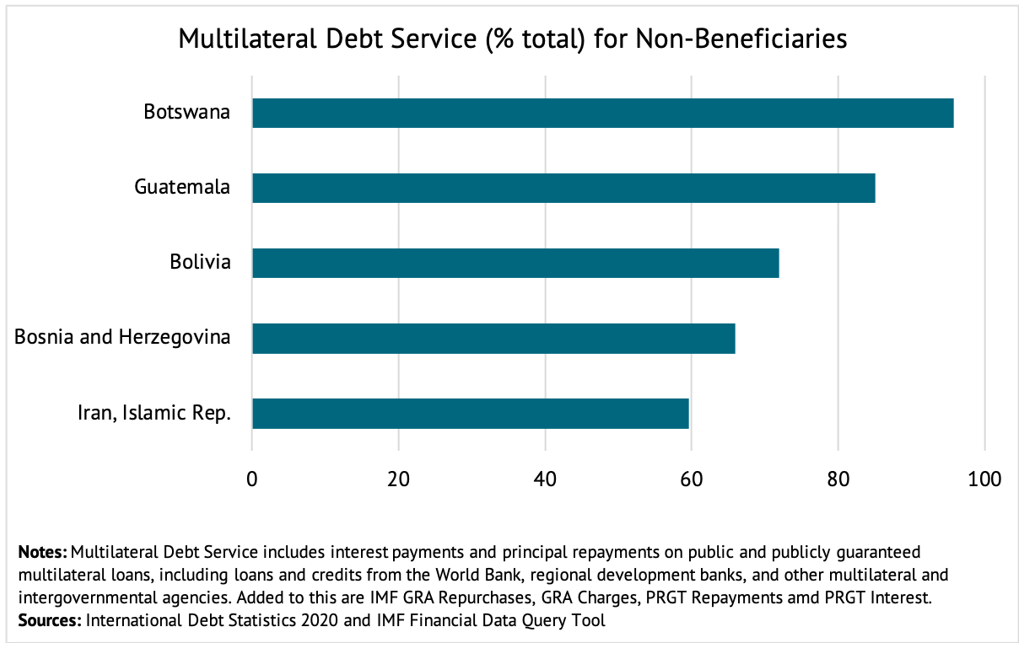 Ramping up new funding for these countries is both necessary to ensure that the IFIs are playing their role and difficult because of their internal rules on country exposure limits, or “access levels” in the case of the IMF. These rules make sense in normal times but given the nature of the crisis, they are no longer appropriate and the IFIs need to find ways to adapt them to deliver the necessary response. There is also the even more intractable problem of the handful of countries (Eritrea, Sudan, and Zimbabwe) that are still in arrears from past lending and thus ineligible for any new money from the IFIs. Finding a way to provide these countries with circumscribed assistance for fighting COVID-19 is nonetheless imperative, and will need creativity and the support of the IFI shareholders.

Establish a new SDR allocation of $1 trillion. Of all the options for increasing reserves and liquidity for emerging markets and low-income countries, Special Drawing Rights commands the broadest support amongst experts. The advantages and limitations have been well laid out. The main obstacle is the unwillingness of the US administration to sign off on a measure that will give international resources to countries like Iran or Venezuela. This point notwithstanding, in this emergency, the benefits of this measure are good for global economic stability and thus good for the US. The job for the next few months is to simultaneously build political support for an SDR allocation while engaging in the necessary technical work, so that the measure can be put into place without additional delay as soon as consensus has been achieved.

Double the lending capacity of the MDBs. On the basis of their announced plans, the multilateral development banks (MDBs) will likely increase their outstanding loan portfolio from about $500B now to between $650-700B over the next 18 months. They are able to do so mainly thanks to recently approved increases to their capital. However, without a further increase in their capital and a less conservative approach to deploying that capital, their ability to respond to the demands for development finance will be severely constrained in the medium term. And that would have serious consequences for development because the financing needs of developing countries will be greater for the rest of this decade as a result of this crisis and because private capital markets will be more risk averse in the aftermath of the global downturn. So, now is the time to push for changes to the financial model that will stretch their capital base and lay the groundwork for the next round of capital increases. This should enable the MDBs to go from a portfolio of $650-700B to $1.3-1.5 trillion in the medium term. Again, a combination of technical work and advocacy to build political support, carried out over the next few months, would have high payoffs.

Create a new framework of debt sustainability and financing for low-income countries. Even before the COVID-19 crisis, 40 percent of low-income counties were either in, or at high risk of, debt distress. The combination of worsened economic prospects and additional emergency financing will ensure that this percentage will be significantly larger in two years’ time. Fixing this problem will require both dealing with the stock of unsustainable debt and agreeing on new rules for financing development in these countries. We know from history that reaching consensus on either of these issues is going to be technically complex and politically difficult. That is the reason why the priority now is to focus on providing cash flow relief to countries and deferring decisions on these more complicated matters for 18 months to two years.

Delivering on the above agenda requires action both at the level of the IFIs and their shareholders. Management of the IMF and World Bank need to take the lead in doing the technical work that will be necessary for these proposals. However, these proposals will not come about without political leadership from their shareholders who must recognize that a crisis of this magnitude requires a cooperative response even when they might disagree on a variety of other international issues. At a time of crisis, political leadership requires more frequent engagement at the ministerial level. The joint Bank-IMF Development Committee have been constituted to provide guidance on these issues, now is the time for them to meet more frequently than every 6 months to ensure that the international financial system can make suitable, necessary changes and then scale up and deliver a response that rises to the challenge of a lifetime.