The Economic Impact of COVID-19 in Low- and Middle-Income Countries
David Evans
and
Mead Over
March 12, 2020

Countries across the world, including the very poorest, have begun to implement heavy-handed measures to slow the rate of transmission of COVID-19. Even before taking those measures, low-income countries with hardly any identified cases were already reporting sizeable economic impacts. Travel and tourism have ground to a halt, producers can’t get materials, and retailers can’t get products. Global growth estimates are down, along with growth estimates for Africa, Latin America, and elsewhere. One estimate suggests that a 1 percent lower growth in the global economy would translate to between 14 million and 22 million more people living in extreme poverty.

Let’s pause for some assumptions. We’ll use numbers from the Imperial College report: absent measures to stem the rate of infection, 81 percent of a country’s population will get infected, 55 percent of cases will be symptomatic, and we retain the report’s age distribution of symptomatic cases requiring hospitalization and hospitalized cases requiring critical care from that report. Let’s add the dramatic assumption that all patients in critical care would tragically pass away. While this is not the case in high-income countries, many low-income countries have very limited critical care facilities, so it may not be as far from the truth as we’d like. 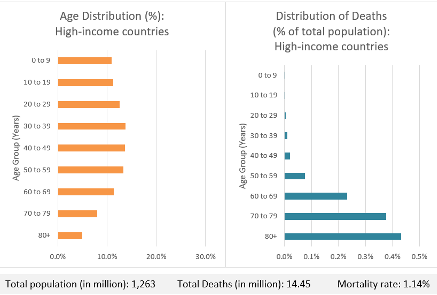 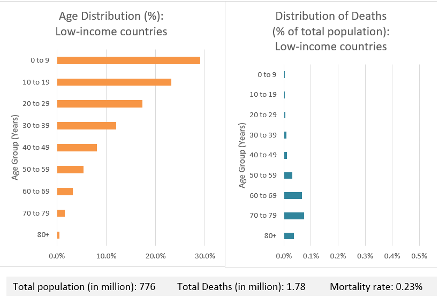 What are the implications of this?

From epidemiologists, we need models of the spread of COVID-19 and the impact of different containment measures with parameters specific to low-income countries with their different age distributions, health care resources, and household sizes. The logic of “flattening the curve,” which in high-income countries relates to the capacity of intensive care beds and ventilators, needs to be theorized appropriately for a low-income context, where those medical resources are already much scarcer.

This post benefitted from research assistance by Amina Mendez Acosta and from comments by Kalipso Chalkidou, Amanda Glassman, and Mead Over.

A note on data and assumptions: For population structure, we used 2020 estimates from the UN’s World Population Prospects. The assumptions about the probability of infection and the probability of showing symptoms are from Ferguson et al. (2020), as are the age-specific estimates of the percentage of symptomatic cases requiring hospitalization and the percentage of hospitalized cases requiring critical care (Table 1).