What’s the Role of a Hospital?

In low- and middle-income countries, a hospital is often the first stop for citizens that experience illness, or the last stop when their health needs aren’t met by primary care. And as countries grow economically, the demand for quality health services at all levels will grow. So when a government decides that it needs to invest in a new hospital or upgrade an existing hospital, how can it do so in a way that helps the health system achieve its goals?

Lesotho appears to be in the thick of dealing with these pressures. One way the country responded was to invest in a new referral hospital, the Queen ‘Mamohato Memorial (QMMH) - a decision that has recently attracted international attention.

The QMMH was built to replace the Queen Elizabeth II Hospital (QE II), which was in such as state of disrepair that it could not be economically remediated. New equipment went unused, because there was no staff trained to use it. [1] While quality of infrastructure and services declined, the cost per bed per day increased substantially from 1990-2007 (see graph below). From the Report on inspection of Queen Elizabeth II Hospital, March 2004:

The basic equipment is just not there… often times it runs out of drugs and suppliers are not prepared to assist on account of the poor record of the Ministry in settling bills. Almost every section is under-staffed and the current professional personnel [are] overworked, demoralized, frustrated, and demotivated. The buildings are in indescribable state of disrepair…

So, the Lesotho government turned to a public-private partnership (PPP) to build its new hospital, with support from the IFC’s Infrastructure Advisory Services Department (read more about the structure of the PPP here).

QMMH has upped quality and availability of hospital services but this has also meant increases in demand for services, which in turn has driven increased spending.[2] In 2012, QMMH had 23,341 inpatient admissions (51% increase over 2007) and 374,669 outpatient visits (126% increase over 2007). Some—but not all—health outcomes have improved as has patient satisfaction (see Table 1). One rationale for the additional services to be provided by the hospital, such as an intensive care unit and CT scans, was to decrease the costly referrals to South Africa. However, as a result of improved diagnostics and quality of care, the number of referrals between 2007 and 2012 actually increased by 61%.[3]

Some believe that the QMMH is now too costly: the high and growing share of public money going to QMMH—51% in 2013, up from the 34% projected in 2007—means less money to primary healthcare in rural areas.[4]

There are still 12 years to go on the Lesotho PPP contract between the hospital, the Government of Lesotho, and Tsepong—the private partner—which means there is time to adapt; to decide on what services to prioritize and how to pay providers to minimize cost overruns and assure the delivery of cost-effective care.

But the whole controversy raises questions: what is the role of a hospital in a healthcare system? And how does a government manage the trade-offs between investing in hospitals and primary care?

It is not uncommon for hospital services to eat up public budgets, driven by demand for care but also inefficiencies in the health system as a whole (as a benchmark, in the EU, hospital expenditures accounted for roughly 40% of public health expenditure in the years between 2003 and 2011[5]).

Further, it can appear that precious public money is going to only a small subset of the population. However, while subsidies to hospitals might generally be regressive (benefitting mainly the better-off), the benefits are by no means exclusively restricted to these groups. Poor people need appendectomies too. In addition, the push for universal health coverage (UHC) and financial risk protection implies that the kind of higher-cost care provided by a hospital might be exactly the sort of coverage UHC would encourage.

Many argue the best way forward is integrated health service delivery that includes a hospital[6]. For example, in maternal and newborn health, the ‘continuum of care’ for the mother and newborn across various service providers (including hospitals) is thought to save most lives.[7] At QMMH, 70% of low birth weight babies survived. Presumably, without the neonatal intensive care unit (which QE II did not have), survival rates would have been much lower.[8]

In the coming months, we’ll post some work on this issue that illustrates how neglected hospitals have become at the international level, and how little we know about improving and aligning their performance in support of UHC goals. Watch this space. 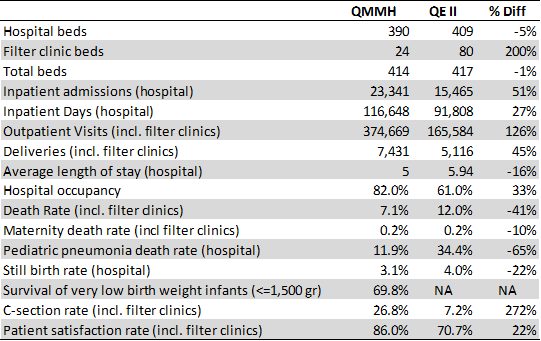 [6] WHO, 2008, “Integrated Health Services—What and Why?,” Technical Brief No.1. Available at http://www.who.int/healthsystems/service_delivery_techbrief1.pdf.

continuum of care,” in Opportunities for Africa’s Newborns, The Partnership for Maternal, Newborn & Child Health. Available at http://www.who.int/pmnch/media/publications/aonsectionII.pdf.

Blog Post
Bringing a COVID-19 Vaccine to Market: Where Do We Go...
Kalipso Chalkidou, Adrian Towse and Rachel Silverman