When China Looks at MDBs, It Sees Infrastructure

Yet, a closer look at the AIIB’s charter suggests openness to a broader range of sectors and activities, pointing to potential for investments in “other productive sectors.” And when we consider how another hegemon—the United States—has looked to the MDBs as a complement to its bilateral programs rather than an extension of them, it’s plausible to consider an evolving role for the AIIB.

We decided to test this proposition a bit further. Our conclusion? If you’re looking for Chinese-led MDBs to move into health, education, and other non-infrastructure areas, don’t hold your breath. Specifically, we took a look at China’s record as an MDB borrower over the past 30 years and the ways in which China has steered its contributions to MDBs. In both instances, we see an overwhelming focus on infrastructure relative to these institutions’ portfolios as a whole. In short, when it comes to infrastructure, China walks the talk, both as an MDB borrower and an MDB donor.

So how much does China’s MDB borrowing reveal an infrastructure preference? To answer this question, we analyze China’s cumulative borrowing from the Asian Development Bank (ADB) compared to the ADB’s operations as a whole in recent years. We find that China’s infrastructure-related borrowing (Energy, Transport, and Water) is at 80% compared to 60% of total lending at the ADB.

In particular, over half of the ADB’s total approvals for China have been focused on transportation. This is consistent with China’s borrowing at the World Bank, where the country’s program portfolio for the transport sector is the single largest program in any sector worldwide. 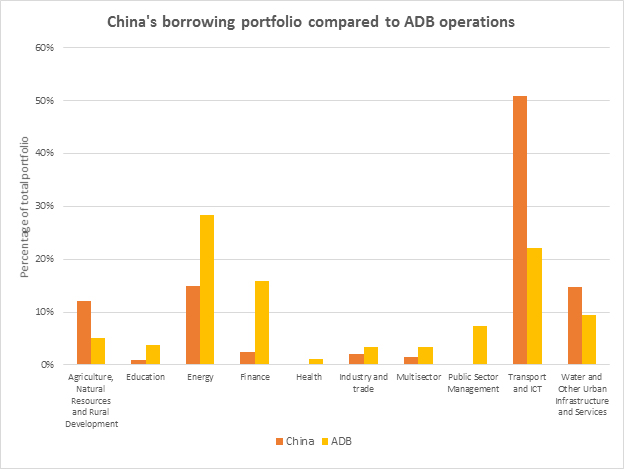 We see the same preference revealed in China’s activities as a donor to MDBs. At the Inter-American Development Bank (IDB), China is the smallest shareholder with just 0.004% of total votes, on par with South Korea, and behind countries like Slovenia and Croatia. As such, it has little direct influence over the bank’s core activities. In light of this, China has established trust funds at the IDB and other MDBs, which affords the country much more influence over the uses of these funds. We examine the IDB trust fund as a useful proxy for China’s attitude as an MDB donor.

In 2013, the People’s Bank of China committed $2 billion to establish the China Co-financing Fund for Latin America and the Caribbean in the IDB, which disburses funds alongside ordinary IDB loans. 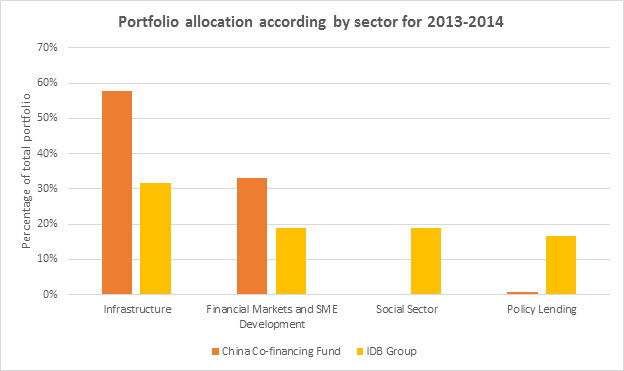 Using the IDB’s total portfolio as a benchmark, we compare the sectors financed by the IDB as a whole and the Co-Financing Fund. The trust fund allocates much larger shares towards Infrastructure (nearly 60%) compared to the IDB benchmark of just over 30%. In social and policy based lending, the fund’s spending is negligible (less than 1% in total) compared to the IDB’s portfolio as a whole (40%).

It’s tempting to consider that the new AIIB will “stick to its knitting” when it comes to infrastructure financing during its start-up period and then explore other sectors and programs in later years. Yet, the evidence from China as both a borrower and donor in MDBs like the ADB and IDB—both of which have long-standing capacity and expertise in a wide array of sectors outside of infrastructure—suggests that the Chinese are largely indifferent to MDB roles in these sectors. Accordingly, it seems likely that the AIIB will stay true to its name.

In advance of adopting a new Policy on Public Information, the AIIB is inviting suggestions on how it could best align public disclosure with its guiding principles of “promoting transparency, enhancing accountability and protecting confidentiality.” The adoption of the new policy provides AIIB President Jin Liqun and the AIIB shareholders an opportunity to demonstrate that this newest of multilateral development banks (MDBs) is serious about its commitment to adopting international best practices. I identified a number of actions that the AIIB could take to improve its disclosure practices. Here are my top three recommendations:

Last week the Asian Infrastructure Investment Bank’s (AIIB) board of directors approved financing for three projects, including, for the first time, a project in China. Looking back at AIIB operations to date, these are my three takeaways.