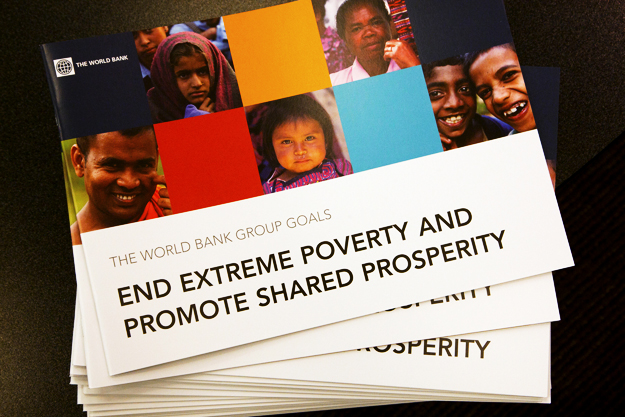 A savvy and prominent Indian policy maker once said to me (roughly):;

The World Bank has decided to make this problem – the divergence of the organization’s rhetoric on “extreme poverty” and their clients’ desire for support in their national development agendas – even worse. They have announced that their goal is to “eradicate extreme poverty” (while only “monitoring” the income of the poorest 40 percent in each country—but with no goal).  This new goal is meant to sound like a bold and ambitious target but is exactly the opposite. This is a dramatic retreat by the World Bank, a shift from an organization that supports national development agendas towards an organization that just promotes cost-effective charity work.  This new focus is wildly at odds with what leaders of developing countries and their citizens want, care about, and want global support in accomplishing. This new goal is like a World Series champion team announcing their goal for the next seasion is not scoring runs or winning games but just bunting well.

The problem is that the exceptionally penurious definition of “extreme” poverty concocted by international elites as a global target includes too few people to be the basis for a development agenda for most of the world.  Table 1 shows the 20 most populous countries in the world (which includes all developing countries with more than 60 million people). This includes 4.9 billion of the world’s 7 billion people. If your agenda isn’t relevant in these places, it just  isn’t really a global development agenda.

Now ask: “how many of these places have substantial development agendas for which they might legitimately expect some support (if not grants ) from a global organization like the World Bank?”  To answer this we look at the ratio of each country to the best country in the world on three indicators of national development: output per capita, democratic performance, and governance (e.g. control of corruption, rule of law, government effectiveness). To make the comparison easier we scale each so that the best is 100 and the worst zero. A National Development Index (NDI) is the (geometric) mean of these three (Kenny and Pritchett 2013)

Certainly Pakistan is a country that no one would characterize as adequately developed. It scores just 18 on the National Development Index (NDI). Yet the poverty head count measure shows only 21 percent of the population in extreme poverty.  So in democratic Pakistan “eradicating extreme poverty” is an agenda that includes only 1 in 5 voters.  Ethiopia has extremely low development in every respect and yet less than one in three Ethiopians is poor enough included in the World Bank’s new goal. While Indonesia, Vietnam, and the Philippines have been doing well in some regards, they are far from free of development challenges, and yet less than one in five of their citizens is in “extreme poverty.”

As my friend in India points out, while India does well on measures of democracy, it has only 6 percent of the output per person of the world’s highest, and faces significant challenges with governance. Yet the headcount poverty is less than a third of the population. Is the median voter in India really so well off that helping them improve their lives and livelihoods cannot be included in the World Bank’s goal?

China’s economic performance has been staggering over the last few decades so its “extreme poverty” rate is only 11.8 percent.  That certainly means China needs no financial  support from development agencies but is China—with only 16 percent of the per capita income of the world’s highest and substantial challenges in governance – now completely off the development agenda except for its bottom-most 11 percent?

Obviously, countries like the USA (86), Germany (82) and Japan (74) are developed, and a development agenda need not apply to them to be globally relevant.  But countries like Mexico (42) and Turkey (45), which have have not been recipients of “aid” for many years, still maintain a productive engagement with the World Bank but their “extreme poverty” is already lower than the 2030 target of “eradication.”

Eradicating extreme poverty has to be just one among many development goals.  It cannot be the sole or primary goal of a development organization that wishes to remain engaged productively with national governments. You cannot set organizational goals that ignore the more than half the population of of all but two of the world’s 20 most populated countries and still remain a global force for progress in development.