Why Can’t America Do Investment Promotion in Africa Like China (or Canada)?

This August, President Obama will host 47 African Heads of State in Washington. The agenda will focus heavily on promoting greater trade and investment ties between the US and the region’s fast growing economies. Amongst other things, this emphasis will play a critical role for the Obama Administration’s Power Africa Initiative and plans for modernizing the African Growth and Opportunity Act.

As US policymakers scramble for summit deliverables, they should consider what China has done on the investment promotion front over the last two decades. Beijing has signed investment treaties with 24 African countries, including 15 out of the largest 20 regional economies. Once all of these agreements are ratified, China will have legally binding agreements covering almost 80 percent of Sub-Saharan Africa’s GDP.

In sharp contrast, the US has negotiated only two African investment treaties in two decades; with all agreements covering a mere 7 percent of regional GDP.

Bilateral investment treaties (BITs) have long been low-cost policy tools for promoting investment, both amongst developed and developing countries. From a development perspective, they can encourage investment by providing foreign investors with core protections against political risk and uncertain business environments. According to UNCTAD, there are now over 3200 investment agreements globally, including almost 300 involving African nations. Moreover, many African governments are negotiating BITs with their neighbors. For instance, Mauritius has signed or ratified agreements with 17 African countries since 2000.

China is far from the only country that has left the US behind. While Washington has been stuck in gridlock the last few years, Canada has been busy inking new investment treaties all over the continent. It has signed agreements with eight African countries, including one of the region’s economic powerhouses, Nigeria. Plus, it has several more deals in the works, like with Ghana and Kenya. Once all of these are ratified, Canada will have quietly signed investment promotion treaties covering two-thirds of Sub-Saharan Africa’s GDP.

Yet, the world’s largest investor, the United States, has remained largely on the sidelines. Even including hoped for agreements with Mauritius and the East African Community, which the US has been negotiating for several years, regional coverage rates will remain extremely low at 16 percent. And far, far away from Germany’s leading coverage rate of 96 percent of regional GDP. 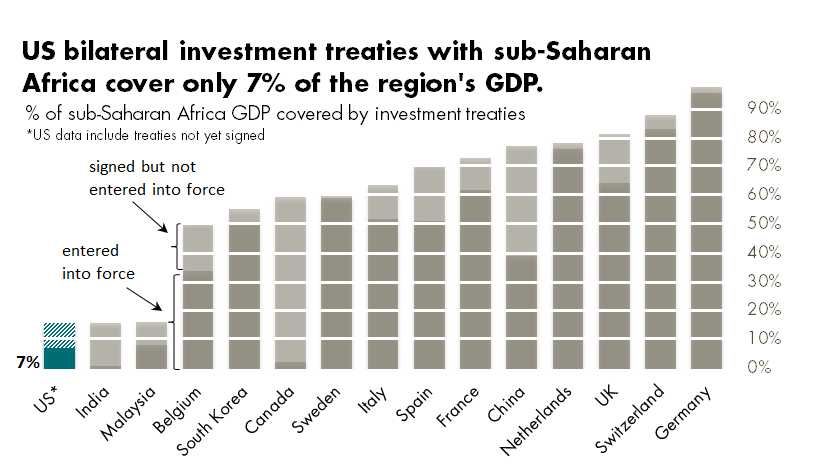 All of this means that American investors don’t get the protection against expropriation, discriminatory treatment, or weak and partial legal systems that the Chinese, Canadians, and Europeans receive. It also means that African economies won’t benefit from the additional American investment that BITs can help to attract, whether in the power, manufacturing, or service sectors.

So, what’s holding the US government back from a more ambitious Africa BIT strategy? In truth, I’m not entirely sure why it has lagged so dreadfully behind its peers. But, there are three likely factors that deserve mentioning:

The US-Africa Summit presents the best opportunity yet for the Obama Administration to launch a more ambitious approach to promoting US investment in Sub-Saharan Africa. In all likelihood, it also may be its last opportunity. The USG has taken a few modest steps already, but it’s time to put things into overdrive. Ideally, President Obama would issue an open invitation to negotiate a BIT with any African government interested in attracting and protecting US investment. Clearly that would strain the USG’s negotiating teams, but sometimes you have to break a little china to get things done.

Anyone who follows this blog knows I’m a big fan of the US electrification initiative Power Africa because of its national security, economic, and developmental benefits.

Are some countries too poor to consume a lot more energy? Or is income growth being held back by a lack of reliable and affordable electricity? While there is a strong relationship between energy consumption and income, the direction of causality is often far less clear. One way to estimate unmet demand may be to try to compare pairs of countries—e.g., how much additional energy does Kenya need to reach the level of Tunisia?

We know very little about what a Trump administration will do about longstanding US efforts to combat global hunger, disease, and poverty. But here are five reasons Power Africa should appeal to a new White House team presumably focused on cutting waste and promoting business.