Among the many questions raised by the Republican takeover of the US Senate is what impact it will have on US international climate policy. Will the rosier tint of US domestic politics mean less rosy prospects for US leadership and finance toward the particularly important objective of reducing emissions from tropical deforestation and forest degradation (REDD+)?

A new CGD Policy Paper, “US Support for REDD+: Reflections on the Past and Future Outlook” by Michael Wolosin and Donna Lee, provides timely analysis that helps answer this question. Their paper covers both the “big-P” politics that determine the existence and amount of US funding for REDD+, as well as the “small-p” politics that shape REDD+ investments.

The analysis is likely to be especially helpful to international observers who might not fully appreciate the political and institutional challenges faced by proponents of US leadership on climate-and-forests finance who are trying to identify and pursue pathways that could liberate the scaled-up finance that is needed.

In brief, the road ahead is difficult, and the recent election makes one of the pathways (through increases in the foreign assistance budget) marginally steeper. But political will could blaze new trails and lead the United States in the right direction.

The United States has traditionally been a leader in providing funding for conservation of tropical forests, consistently ranking among the top five donors to international forestry in recent decades. And thanks to a $1 billion pledge made at the climate talks in Copenhagen in 2009, the United States positioned itself as second only to Norway in pledges to support REDD+ over the period from 2006 to 2014. The US position relative to other countries in the REDD+ league table is illuminated in the figure below from a previously released CGD Working Paper on the state of REDD+ finance.

But with the fulfillment of the $1 billion pledge in 2013, the ability of the United States to make further bold international commitments related to REDD+ is constrained by the broader context of climate politics and budget austerity.

After Copenhagen, the US Congress—even with a Democratic majority in the Senate—failed to pass comprehensive climate change legislation that could have generated a significant new source of finance for forests or demand for international forestry offsets. By declining to put a price on carbon, Congress effectively kept REDD+ finance boxed into the international affairs budget. In a time of continuing austerity, even maintaining current spending levels is a challenge, and large increases in development assistance funding are unlikely. According to Wolosin and Lee, climate skepticism in Congress compounds the challenge: for budget-hawk climate deniers, “international climate finance” is three dirty words strung together.

It’s not just climate skepticism that challenges REDD+ finance (and in fact many of the same climate doubters have a long history of support for international forest funding linked to other objectives such as biodiversity conservation), but also the rules that govern development aid. Rewarding forest-rich countries for their success in reducing forest-based emissions is at the heart of the idea of REDD+. But confining forest-and-climate finance to resources flowing through existing foreign assistance channels makes it extremely difficult to program funds on a “payment-for-performance” basis. Foreign assistance has not traditionally been used to make payments after the fact based on measured results—what CGD calls “Cash-on-Delivery” aid. The annual appropriations process makes it difficult to set aside large sums upfront and can reduce the power of multi-year pledges that would otherwise have to be caveated as “subject to future appropriations.”

The politics of REDD+ in particular

Wolosin and Lee also illuminate the “insider baseball” that has conditioned US support for REDD+. International forest funding has long enjoyed bilateral support in Congress and from a range of constituencies. Elevating climate change as a driving factor behind such funding brought new constituencies to bear, and led to a doubling over the last decade, as shown in the figure below.

US funding for International Forests

But even as international forest finance increased dramatically, there were extensive debates on how REDD+ could or should move forward, with objections raised—even, and perhaps especially—by groups that otherwise favor international engagement to conserve tropical forests. Their concerns focus on whether or not particular models of achieving REDD+ would be good for local and indigenous communities, and whether or not REDD+ would in fact be effective in protecting forests and reducing emissions.

A particular fault line is around the role of market-based offsets in generating finance for REDD+. A figure in the Wolosin and Lee paper reproduced below illustrates how US NGOs are arrayed across a spectrum defined by whether or not they see REDD+ as more of a risk or more of an opportunity.

NGO Constituencies for REDD+ in the United States 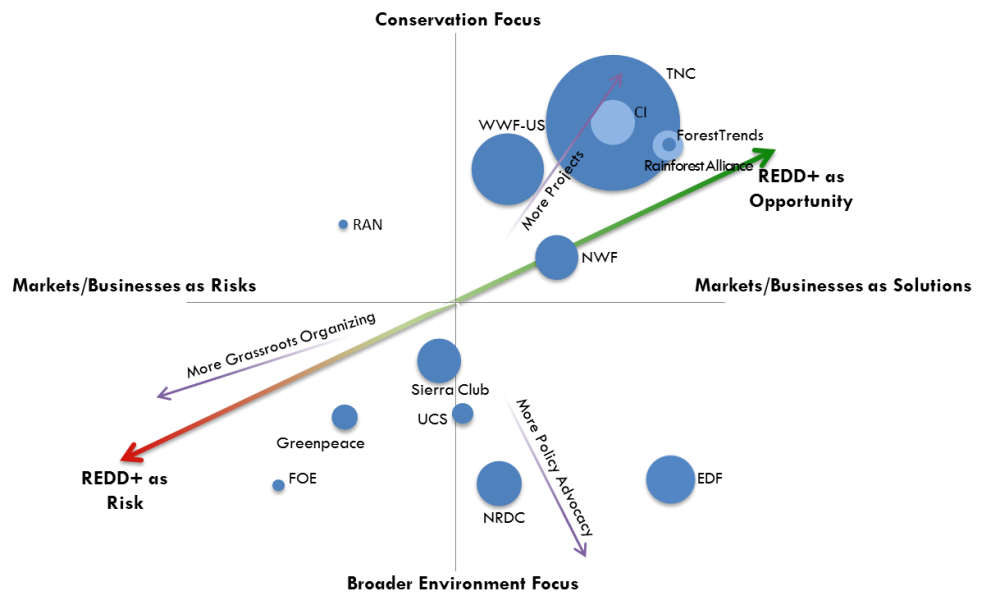 As the figure suggests, the weight of environmental and conservation groups came down clearly on the side of markets as solutions in the climate legislation process of 2008–2010, but these conflicts could re-emerge with any new discussion of REDD+ finance.

The outlook for US leadership

As I wrote in September, REDD+ can only be successful if forest-rich countries can count on rewards commensurate with the hard work of reducing deforestation, and the United States is one of the few countries with the resources capable of providing such finance. While challenging, there are at least three sources of optimism that the United States could mobilize significant additional performance-based finance for REDD+.

The first, noted by Wolosin and Lee, is that political winds can shift unexpectedly. A refreshing breeze that was not anticipated in the early days of REDD+ has resulted from the wave of commitments to deforestation-free supply chains by companies that produce, trade, and use the commodities that are the major drivers of tropical forest loss. As described here, in June 2014 the Consumer Goods Forum, representing some 400 companies, urged governments to make REDD+ a priority.

In September at the UN Secretary General’s Climate Summit, US corporate giants such as McDonalds and Walmart signed on to the New York Declaration on Forests, aligning their brands with efforts to fight deforestation. The US Government (through the US Embassy in Jakarta) helped to midwife a complementary “Indonesia Palm Oil Pledge” among four large producer companies and the Indonesian Chamber of Commerce and Industry, and to nudge Cargill, which made a sweeping global no-deforestation commitment across commodities, into joining the fold. The United States signed onto the declaration as well, pledging to work with these companies and other governments to ensure “that strong, large-scale economic incentives are in place commensurate with the size of the challenge.”

Companies understand that progress on REDD+ is an instrument to catalyze the policy changes in producer countries that will be necessary to make fulfillment of corporate no-deforestation commitments possible. As a result, corporate supply chain actors now represent an important new constituency for US finance of REDD+.

A second reason for optimism is that there may be room for the Obama Administration to advance finance for the climate-and-forests agenda in a way consistent with its broader strategy to pursue climate action under existing authorities, thus not requiring Congressional action. In particular, it might be possible to encourage state-level innovation under the Clean Air Act to incorporate international forest offsets into emission reduction strategies, as has been explored in the context of California’s cap-and-trade system. (For more on what the EPA could do, see this blog from Michael Wolosin.)

Finally, pressure is building for the United States to have something to bring to the table in the run-up the UNFCCC COP21 in Paris in late 2015, by which time countries are expected to have articulated their national emission reduction commitments. Last week’s surprise climate agreement between the United States and China removes one of the excuses for inaction and could generate momentum to step up ambition in developing and developed countries alike. The combination of increased pressure and willing partners is likely to stimulate the flow of creative juices to identify solutions that would allow the United States to exhibit the political leadership necessary to implement those solutions.

Last week’s second surprise, Obama’s announcement of a $3 billion commitment to the Green Climate Fund at the G-20 Summit in Brisbane, suggests that he is willing to reallocate existing sources of funding and/or challenge Congress to increase appropriations. (See the blog by my colleague Michele de Nevers on this.)

Is it different in other countries?

The paper by Wolosin and Lee is the first of six CGD papers on the politics of REDD+ finance in donor countries that will be released in the coming weeks. Watch this space for introductions of case studies on Norway, Germany, the United Kingdom, and Australia. Next up: the politics of including international forest offsets in California’s cap-and-trade program.