Our recent paper examining the World Bank’s COVID-19 performance garnered a response from the institution, which you can read here. We very much welcome the bank’s comments on its crisis performance in reaction to our paper. We stand by the data and conclusions of our paper, but it’s worth reviewing some of the issues under debate here and reiterating the core questions and findings from our work.

Is the World Bank on track to meet its own COVID targets?

We should be clear up front that the bank’s response clarifies one point that required a correction in our paper. We misstated the World Bank’s self-defined target for COVID relief. While the pledge of $160 billion in financing by June 2021 has been a key talking point for the institution since February, we incorrectly interpreted that number to reflect IBRD and IDA financing for developing countries, without recognizing that the bank also includes IFC and MIGA support for private companies in that number. In fact, the bank’s target for supporting its client governments through IDA and IBRD is $104 billion. We have corrected this dollar figure in the underlying paper and in the accompanying blog.

Our numbers tracking bank lending remain unchanged. Using the lower target of $104 billion, new lending commitments appear on track to reach or even exceed the bank’s goal by June 2021, but actual loan disbursements are on pace to fall short of the goal by $25 billion.

We argue that it’s not. Clearly, this is a somewhat subjective judgment. World Bank management appears to disagree with us in spirit, but they haven’t pointed to any specific flaws in our analysis. Responding to a question from the Wall Street Journal about our findings, World Bank President David Malpass’s only comment regarding the bank’s lending volume was that it’s “the maximum that is possible on the current capitalization.”

$104 billion is in fact a difficult number to evaluate in isolation, as is a target date of June 2021. In our paper, we offered a few different ways to put these numbers in context.

How big are net flows from the World Bank to specific countries, after accounting for payments on older loans?

The World Bank’s response to our paper suggests that “net flows” (new disbursements from the bank minus loan repayments) for all IDA countries are positive. That’s not quite what we found in our data, though we do find that most IDA countries are seeing net positive flows. More importantly, we find that these net positives are exceedingly small in a large number of cases (IDA and IBRD countries) and fall far short of meeting countries’ financing needs.

Comparing loan disbursements to all repayments on principal plus interest and fees, as % of recipient GDP 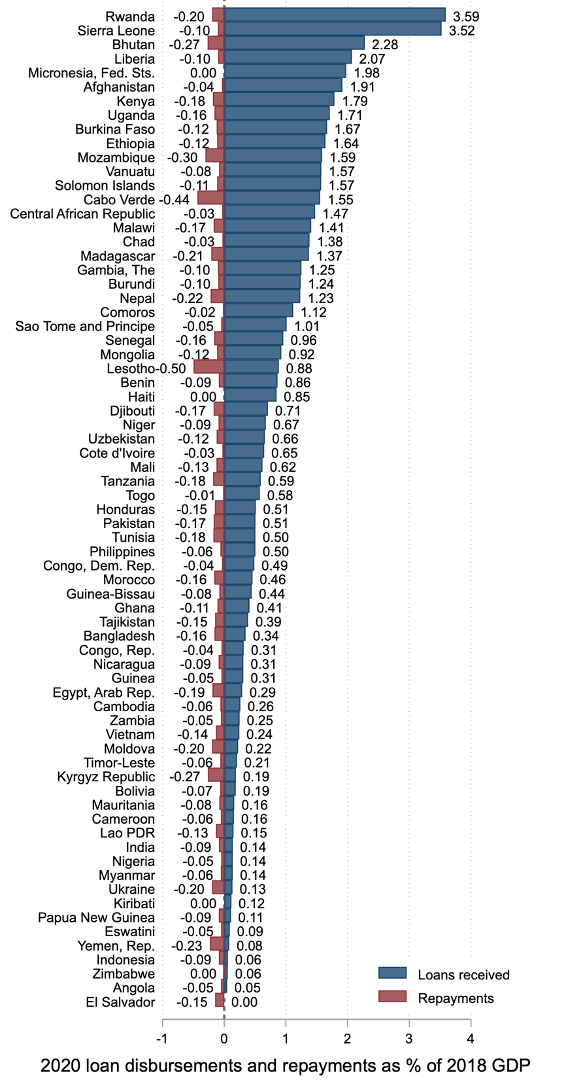 More revealing though is that the bank remains silent on actual net flows on a country-by-country basis, beyond asserting that they are positive for all IDA countries. They don’t characterize net flows for IBRD countries at all. Of course, “positive” net flows for an IDA country can mean $1 or it can mean $1 billion. The bank hasn’t given us any basis for reconsidering our estimates, but as we say in our paper, it would be far better for the institution itself to commit to monthly, country-by-country reporting of these data. So our challenge to the bank: if the depiction in Figure 1 is wrong, please post the correct version. We are encouraged that it’s not just us making this plea—we note that G20 finance ministers have called on all multilateral development banks to provide better data on the net flow basis of their crisis financing.

Is the bank using all of its tools to move money quickly?

The World Bank also claims that the share of its portfolio devoted to “development policy operations” (aka, budget support) has increased, while we argue that it has decreased slightly. In this case, the difference may be a matter of comparators. We note that reliance on budget support is down relative to last year despite the crisis and the need for urgent unrestricted financing, while they note it’s up compared to a five-year average. No big deal we suppose, though we are encouraged that the institution is willing to make the case for budget support as an essential form of crisis response.

We’ve been pleased by the discussion our paper has generated, but some of those discussions have us concerned. Ultimately World Bank management is beholden to its shareholders on questions of resources and policy. On both fronts we want to provide a clear message to those shareholders: the World Bank should provide more and faster financing. Bank management’s sensitivity to capital constraints and excessive caution on disbursements can ultimately be traced back to the shareholders themselves. Yet, the bank’s largest shareholders include countries that have provided unprecedented levels of fiscal stimulus at home measured in weeks rather than months or years. We think these same countries have some obligation to avoid hypocrisy in their treatment of the world’s poorest and most vulnerable in the face of a crisis without precedent. That will mean, at a minimum, meeting the World Bank’s request for additional donor contributions to IDA in the months ahead.