In April, I attended a very hopeful event sponsored by the World Bank entitled, “Tobacco Taxation Win-Win for Public Health and Domestic Resources Mobilization.” My optimism was buoyed by seeing people from different ministries, disciplines, and perspectives all recognizing the need to raise tobacco taxes and sharing ideas on how to reduce the death toll from smoking.

Then the bubble burst. I got home and saw a Wall Street Journal article about the increasing profitability of cigarette corporations in the US domestic market—a reminder that, unbelievably, we are still on the defensive against this large, growing, and completely avoidable disaster.

The event was a very welcome demonstration of the World Bank’s growing commitment to help its member countries reduce avoidable deaths from smoking. (I’ve been critical in past blogs and I want to stress my support for their recent progress). At this event, the World Bank showed how it has encouraged collaboration between its health, governance, and finance teams on tobacco. In this way, the World Bank is addressing one of the most common reasons for the world’s failure to act more forcefully against tobacco: fragmentation of responsibilities. Finance Ministries are the ones who can raise tobacco taxes (which are an incredibly cost-effective measure), while Health Ministries are preoccupied with treating smoking-related illnesses, and governance specialists are addressing accountability and democracy with less time to focus on the way cigarette companies undermine public policy. By bringing together the lead managers on health, governance, and finance, the World Bank showed how cross-sector collaboration has helped member countries raise tobacco taxes in Armenia, Colombia, Moldova, Philippines, and Ukraine.

The event also provided a good reality check on the state of debate over tobacco around the world. CGD’s president Masood Ahmed reflected the most prominent issues in his keynote speech (and blog post), particularly on whether tobacco taxes are regressive or lead to smuggling.

Don’t forget that the smoking-related diseases are regressive

Tobacco companies (and indeed many economists) have lobbied against tobacco taxes by arguing that they are regressive, but the presentations at the event revealed the real problem: smoking hazards are regressive. Average consumption of cigarettes is more than twice as high among the poorest quintile than the richest in countries like the Philippines, Thailand, and Uruguay. Researchers at the event presented studies on Chile and Armenia that demonstrated how the poor are more likely than the rich to smoke, to die from smoking, to suffer ill health and high medical costs from smoking (Figure 1), and to impoverish themselves and their children by smoking. Marginal tobacco taxes reverse this process (Figure 2) because the poor are more responsive to tobacco taxes, and quit or reduce consumption in larger numbers than the rich. 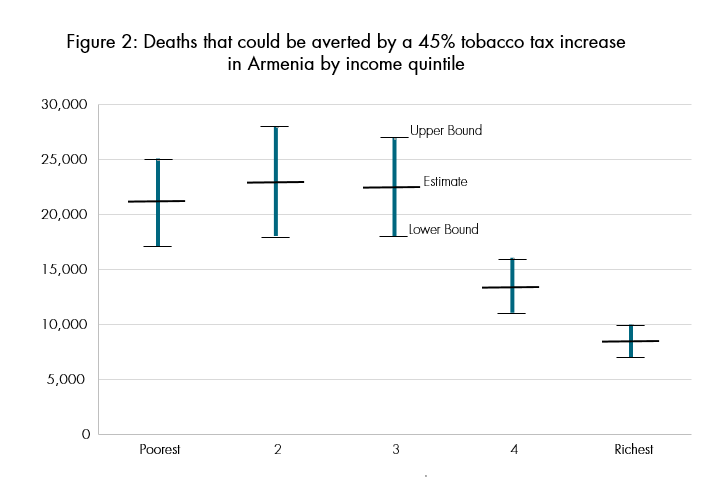 Tobacco companies also push the idea that raising tobacco taxes leads to evasion and illicit trade. At the event, people documented the many ways countries have improved tax administration and enforcement to reduce illicit trade. Some also reminded participants that wholesale smuggling requires complicity by the tobacco industry, as demonstrated by huge settlements against tobacco companies who encouraged smuggling in Canada, the UK, and the European Union.

Less remarked upon was the following double standard: somehow, evasion is viewed as a reason to be cautious with tobacco taxes but not as a reason to question other taxes like VAT. In most countries, the share of VAT lost to evasion dwarfs the amount lost through illicit trade of tobacco (see Figure 3). For these other taxes, the public debates focus—appropriately—on improving administration and enforcement. Why not treat tobacco taxes the same way?

In part this is due to the industry’s huge influence on the financial media, spreading stories about runaway smuggling to resist tobacco control measures like plain packaging or higher taxes. These campaigns end up indirectly influencing technical policy documents which urge caution when they should be urging action, including at places like the IMF which is still far too cautious in pushing for higher tobacco taxation in its policy advice.

The world’s most profitable disaster

When someone proposes to raise tobacco taxes, they face a persistent series of doubts that have to be dispelled. Why? The main reason is that the tobacco industry has been feeding public debates with misinformation for decades. And no wonder. They profit immeasurably from selling cigarettes. Prabhat Jha estimates that every $10,000 in profit is associated with one premature death (for a person who loses on average about 10 years of life). And profits are huge.

Cigarette companies are one of the best investments you can find. How is that possible given all the public relations campaigns against tobacco? In the United States, these companies have more than compensated from reduced consumption by raising prices, boosting cigarette revenue to $93.4 billion in 2016—more than Americans spent on soft drinks and beer combined. But profits overseas are doing fine as well. The prevalence of smoking in Indonesia and 25 African countries is rising not only in numbers but as a share of the population. And the gains in other countries where prevalence is declining may be short-lived if cigarettes become more affordable through a combination of inflation (which erodes the impact of specific taxes), rising incomes, sophisticated marketing to get consumers addicted to nicotine, and effective intimidation of governments that try to implement their commitments under the Framework Convention on Tobacco Control.

The bottom line: raising tobacco taxes will save lives. Tripling excise taxes around the world would double prices, reduce consumption by about one-third and avoid 200 million deaths in this century. But raising tobacco taxes won’t necessarily reduce tobacco company profits. And because it is legal to profit from encouraging smoking, we will have to respond to a continuing litany of arguments clouding the debate and stalling action on public health measures that reduce smoking.

Deaths from smoking are an extremely profitable slow-motion disaster. I’m hoping this recent event heralds an energetic campaign to educate staff at the World Bank, the IMF, and Finance Ministries around the world about the magnitude of the epidemic, the manipulation of policy debates, and the deceptions practiced through clever use of double-standards. It is the only way to confront and dispel the tobacco industry’s well-financed smokescreens.

Thanks to Prabhat Jha, Evan Blecher, and Masood Ahmed for feedback, suggestions, and inputs.

Blog Post
Who Smokes in Developing Countries? Implications for a...
Lee Crawfurd and Alexis Le Nestour

This week, Mayor Michael Bloomberg and former Treasury Secretary Lawrence Summers announced a new Task Force on Fiscal Policy for Health. This is the first time such a high-level group of respected economic and fiscal policy opinion leaders has convened on this issue, creating an opportunity to acknowledge the importance of taxes for promoting health and to take action to save lives.