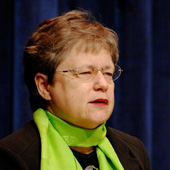 Carol Lancaster (1942-2014) was a non-resident fellow at the Center for Global Development and dean of the Edmund A. Walsh School of Foreign Service at Georgetown University. Before joining the Georgetown faculty in 1996, Professor Lancaster served three years as Deputy Administrator of the U.S. Agency for International Development. She also served as Deputy Assistant Secretary of State for African Affairs (1980-81) and as a member of the Policy Planning Staff of the Department of State (1977-80). Lancaster wrote several books on African development and U.S. foreign assistance, including Transforming U.S. Aid: United States Assistance in the 21st Century, which was published by the Institute for International Economics, and Aid to Africa: So Much to do, So Little Done. She wrote or edited several other books and several dozen articles published in scholarly journals and periodicals. Carol chaired the board of directors of the Center for Economic Development and Population Activities. Previously, she served on the boards of Volunteers in Technical Assistance and World Education. She was a member of the USAID Advisory Committee on Voluntary Foreign Aid since 1997.

If It Doesn’t Get Counted, Does It Count? New Measures of Aid Quality for Microfinance, Humanitarian Aid, and Everything Else
December 16, 2008 2:00—4:00 PM