The results presented here are an early analysis of the PSL program’s first-year data and represent our best effort given the limited timeframe in which policy decisions are being made. An academic advisory committee of experienced researchers has provided feedback, but these results are preliminary and have not yet been extensively peer-reviewed.

After one year, public schools managed by private operators raised student learning by 60 percent compared to standard public schools. But costs were high, performance varied across operators, and contracts authorized the largest operator to push excess pupils and under-performing teachers into other government schools.

On average, partnership schools improved teaching and increased learning by the equivalent of about 0.6 extra years of school

Costs were high, in terms of government staffing and private subsidies

Figure 2: PSL increased the likelihood of students and teachers…[6]

Figure 3: The effect of class-size caps on enrollment[8] 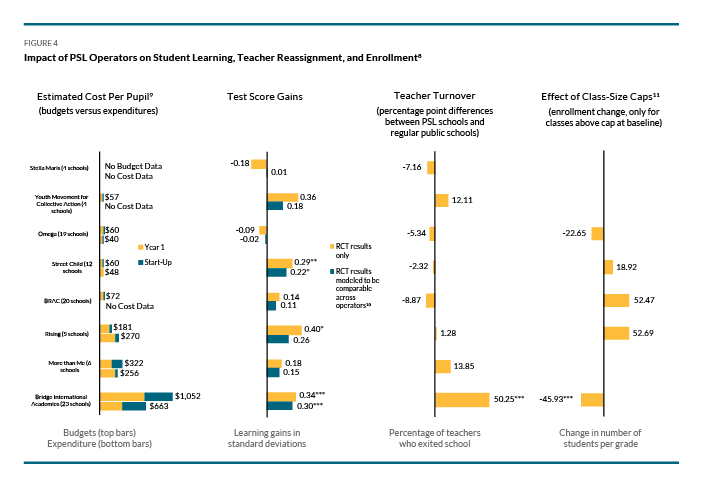 [3] Because they were not subject to the same contracts, neither Bridge International Academies nor Stella Maris received the extra $50 per pupil.

[5] In Figure 1, the blue bar represents the average difference in test scores from one grade to the next in comparison schools. The green bar also includes the impact of the program.

[6] All results in Figures 1 & 2 are p < 0.01. Small p values indicate statistical significance: that the observed effect of PSL is not likely to have occurred by chance.

[9] Operators reported their original (pre-spending) per-pupil budgets (top bars). Five operators also submitted additional (self-reported) data to the evaluation team on actual expenditures, in various formats (bottom bars). These costs reflect both costs that operators say are startup costs and the operators’ year 1 costs. See Footnote 4 on page 2 of this brief, regarding several caveats that apply to the budget and cost data used in this figure.

[10] These treatment estimates adjust for baseline differences in schools. The estimates also include a Bayesian adjustment, which averages the overall effect and the operator’s individual effect, weighted according to the operator’s number of schools.

[11] Some operators had no schools with baseline class sizes above the class caps.