An Overview of the Millennium Challenge Corporation

The Millennium Challenge Corporation (MCC), an independent US foreign assistance agency, was established with broad bipartisan support in January 2004. The agency was designed to deliver aid differently, with a mission and model reflecting key principles of aid effectiveness.

MCC has a single objective—reducing poverty through economic growth—which allows it to pursue development objectives in a targeted way. There are three key pillars that underpin MCC’s model:

Though MCC is an important tool in the US government’s foreign aid toolbox and the only one designed to focus exclusively on development assistance, it is a relatively small agency. 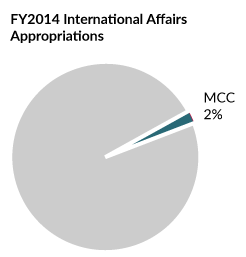 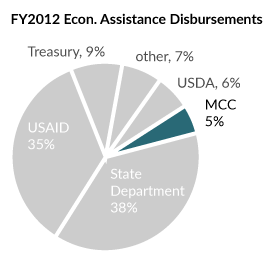 MCC partners only with low- and lower-middle-income countries that demonstrate commitment to good governance. [1] MCC determines country eligibility through a series of quantitative, third-party indicators that assess policy performance. These indicators fall into the three broad areas: ruling justly, investing in people, and economic freedom. MCC compiles these indicators into country “scorecards,” that the agency’s board of directors uses to inform its annual eligibility decisions. [2] In particular, the board considers countries that score better than half of their income-based peer group on the majority of the indicators. Most of MCC’s money goes to low-income countries (LICs), but MCC is allowed to dedicate up to 25 percent of its funds for lower-middle-income countries (LMICs) (see table 1).

The scorecards are the transparent, public face of the selection process, and MCC and its board weigh these quantitative assessments heavily. However, the indicators are incomplete and imperfect proxies for actual policy performance, so the board relies also on supplemental information to get a more complete understanding of candidate countries’ actual policy performance.

Table 1. MCC compacts (both number of programs and funds allocated) correspond roughly with the distribution of world’s low- and lower-middle-income countries, with the exception of South and Central Asia.

Note: Data in this table refer to those countries that have signed a compact with MCC. The list of low- and lower-middle-income countries changes somewhat each year as countries’ incomes change. This table reflects the list as of FY2015, according to 2013 data on gross national income per capita, Atlas method (Source: World Bank). Twenty-three of the 83 candidate countries do not have recent poverty estimates (2005 or later). Of these, two-thirds are low-income countries (Burma, North Korea, and Solomon Islands in Asia/Pacific; Haiti in Latin America/Caribbean; Afghanistan and Uzbekistan in South/Central Asia; Comoros, Djibouti, Eritrea, the Gambia, Guinea-Bissau, Somalia, South Sudan, and Zimbabwe in sub-Saharan Africa) and one-third are lower-middle-income countries (Kiribati, Micronesia, Mongolia, Papua New Guinea, Samoa, and Vanuatu in Asia/Pacific; Kosovo in Europe/Eurasia; Guyana in Latin America / Caribbean; Syria in Middle East / North Africa). These countries were excluded from the “percent of LIC/LMIC poor” calculation, so these figures should be considered imprecise estimates. The high percentage of population and poverty rates in South/Central Asia is driven largely by India.

MCC’s flagship program is the country compact. A compact is an agreement with a partner country in which MCC provides large-scale grant financing (around $350 million, on average) over five years for projects targeted at reducing poverty through economic growth (see table 2).

Note: Current as of December 2014.
* Italicized completion dates indicate a compact that was terminated before its scheduled closure due to a military coup in the country.

When the MCC was created the international community was coming to consensus on principles that would make foreign aid more effective. A number of these principles are included in MCC’s model:

Ten years after its creation, MCC remains a compelling example of how foreign assistance can be structured to enhance aid effectiveness. Not surprisingly, the institution’s practices have not always been entirely consistent with its model. The agency has evolved over the past 10 years as rhetoric and best intentions encountered operational realities and political challenges. Consequently, there are a number of ways MCC could strengthen the implementation of certain aspects of its model, as outlined in CGD’s MCC at 10 series. But with 10 years of experience and a track record of more than $10 billion in programs, MCC’s application of aid effectiveness principles clearly and impressively distinguishes the agency from many other donors and provides a sound foundation for continued support of MCC’s operations.

In the MCC at 10 series, Sarah Rose and Franck Wiebe take an in-depth look at three main pillars of MCC’s model: the agency’s focus on policy performance, results, and country ownership. To what extent has MCC’s model governed its operations in practice? How should MCC strengthen and expand its model and operations during the next 10 years? How is MCC different than other modes of US foreign assistance? Find the papers and more briefs like this one at CGDev.org/page/mcc-ten.

[1] MCC candidate countries are those that have per capita incomes (Atlas method) less than or equal to $4125 (for FY2015) and are not statutorily restricted from receiving US foreign assistance.

[4] For the last two years, MCC has ranked in the top three out of over 65 donors on Publish What You Fund’s Aid Transparency Index. http://ati.publishwhatyoufund.org/