A proposal for a pay-for-performance mechanism to finance sustainable development goals and global public goods that maximizes the efficient use of public credit and builds on major technology breakthroughs for measuring results.

The Tropical Forest Finance Facility (TFFF) is a pay-for-performance mechanism that would operate like a multilateral sovereign wealth fund, the net returns on which would be awarded to tropical forest countries for protecting their natural forests. Tropical forests are undervalued assets in addressing sustainable development challenges, including climate change and maintaining biodiversity. Crucially, the TFFF can provide an incentive to tropical forest countries without encumbering the finances of the countries that sponsor it. And modern satellite technology provides an easy and accurate way to measure successful outcomes.

How Would It Work?

The TFFF would be established by interested tropical forest countries and developed country partners. To capitalize the TFFF, developed country sovereign investors could borrow in global money markets and government bond markets or make cash investments from other resources, e.g., sovereign wealth funds or central bank reserves. These forms of borrowing in developed countries offer the lowest funding cost in the market, since they effectively “monetize” the sovereign credit of the government. Private investor sponsors or philanthropic organizations, such as foundations or university endowments, would also be invited to participate.

These low-cost funds would be invested over a long horizon in a diversified, time-limited endowment-like portfolio of relatively riskier assets with higher expected returns, akin to the portfolios of major universities, endowments and foundations, sovereign wealth and pension funds. Investor sponsors would retain a first call on the TFFF’s assets to cover debt service and redemptions. At the end of the TFFF’s life (e.g., 20 years), the initial capital would be returned to investors.

The difference between the cost of the borrowing that would fund the TFFF (cash, deposits or low-interest bonds) and the return on its invested portfolio would accrue to qualifying tropical forest countries that successfully protect their forest resources. As an example, for the last decade (based on the average return to US university endowments and the average cost of short-term US government borrowing), a dollar-based TFFF would have returned on average about 5.5 percent, net of estimated expenses and the cost of borrowing. 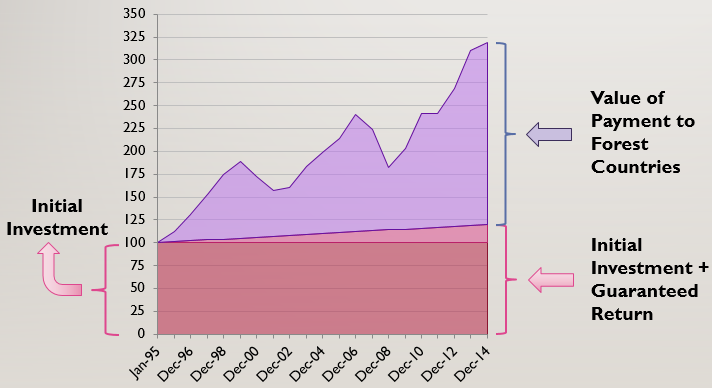 A USD 100 billion fund started in January of 1995 would have generated USD 5.5 billion per year, on average, to be allocated to tropical forest countries based on their successful performance in reducing deforestation or maintaining forest cover. The visibility of the program and the size of the payments, relative to currently available performance payments for forests, should be influential in changing behaviors in forest countries. This would be particularly true in poor countries with tropical forests.

The TFFF would have a finite life, proposed initially for 20 years. The life of the fund should be long enough to achieve meaningful progress on forest protection and provide a time horizon appropriate for meaningful investment returns, but short enough to provide a repayment of the debt funding the TFFF within the shortest possible period commensurate with the objective and investment horizon.

The TFFF would be a substantial fund, but modest in relation to the importance of its objective and the scale of its sponsors’ other fixed-income portfolios. The initial proposal is to mobilize USD 100 billion. This compares with USD 6,200 billion in bank deposits guaranteed by the US government alone, and with investment funds such as the Abu Dhabi Investment Authority (USD 775 billion estimated), the Norwegian Sovereign Wealth Fund (USD 960 billion) or the California Public Employee Retirement System (USD 295 billion).

The financial risks are clear, but limited:

How Would Performance Be Assessed?

Each tropical forest country would be allocated annually a share of the excess returns on the TFFF’s investments (above the cost of funds), based on a combination of (i) its performance in maintaining forests or reducing deforestation against a benchmark and (ii) its share of global tropical forests. Success in maintaining tropical forests would be assessed as simply as possible, primarily through breakthrough technology in annual satellite monitoring, and would be transparent, public, and independently verified.

Performance in maintaining and expanding natural forests should be measured annually using data that is:

And the facility’s performance measurement and allocation formula should:

Funds should be allocated:

The proposed scheme could, in fact, be used for many development objectives. A reason to start with forests is that new developments in satellite monitoring technology provide an easy and highly accurate way to measure success, unlike outcomes in education or health, which are more granular, subjective, or expensive to measure.

Deforestation in many developing countries has been the result of seemingly compelling economic incentives—at least for those controlling land. A significant incentive to take the difficult steps necessary to end deforestation is needed. The TFFF will offer a highly-visible, large-scale reward for successfully tackling deforestation without increasing funding demands on overseas development assistance, as well as proposing a financing mechanism that could be applied to other development goals or global public goods.

Loss and degradation of forests—especially in the tropics—contribute more to annual emissions of CO2 to the atmosphere than any human activity other than energy production and consumption.

Halting tropical deforestation and replanting degraded forests could capture 24-30 percent of current global emissions. Forests are the most effective and efficient carbon capture and storage mechanism available and offer a lower cost per unit of CO2 emissions avoided of most other measures available to mitigate climate change.

The Center for Global Development is grateful for contributions from the Rockefeller Foundation and the Norwegian Agency for Development Cooperation in support of this work.