Achieving the SDGs Will Require More than Revenue Increases

How much progress is made in achieving the Sustainable Development Goals (SDGs) is likely to depend crucially on resources low and lower-middle income countries (LIC/LMICs) can mobilize domestically. This is because the financing needed to achieve the SDGs is large. According to the IMF, additional spending—public and private– required to achieve SDGs in five areas (education, health, roads, electricity, water and sanitation) will, on average, amount to 15 percent of GDP annually by 2030. While average tax-to-GDP ratios have risen in LIC/LMICs since 2000, financing the SDGs will require this ratio to grow by at least by 5 percent by 2030 or roughly 0.5 percent annually. This is likely to be a major challenge given that revenue growth over the past 20 years has been substantially less and several countries remain stuck at broadly the same revenue ratio as during the early 2000s (e.g., Kenya and Zambia).

The recognition that LIC/LMICs have limited technical and administrative tax capacity to raise revenues stems from the 2015 Addis Ababa Action Agenda (AAAA) and was a catalyst for the Addis Tax Initiative (ATI). The latter initiative in some ways reflects that until now relatively little donor assistance was provided for supporting DRM activities in developing countries. More than 55 countries and regional and international organizations joined ATI, committing donor countries to double their assistance to strengthening domestic resource mobilization (DRM) in LIC/LMICs by 2020. Over 25 bilateral donors and 30 multilateral institutions, regional organizations, public corporations, and private-sector companies are providing financial support, technical assistance, and policy advice in DRM (Figures 1 and 2). 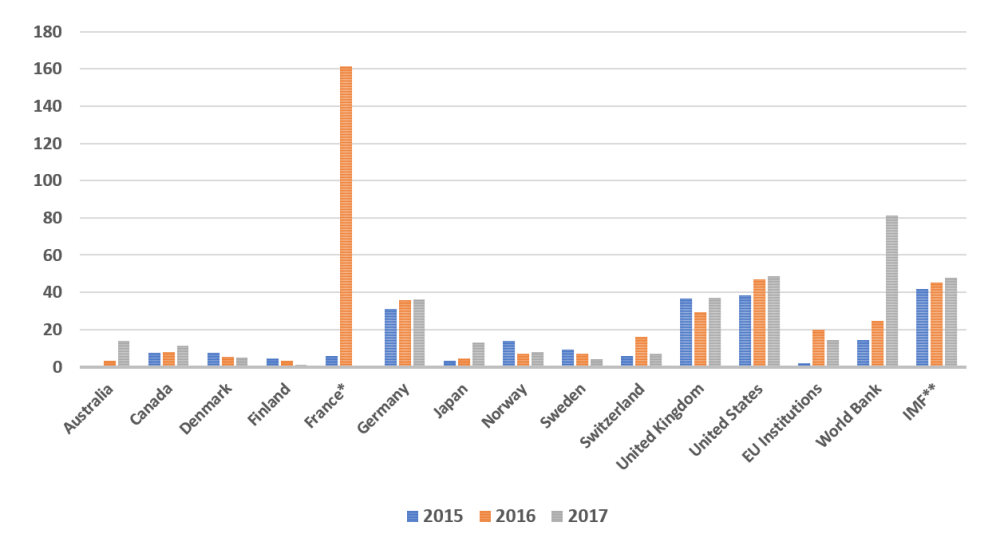 While these efforts should help LIC/LMICs to mobilize additional resources domestically over time, there is less agreement on what this improvement entails….

Policy advice and technical assistance in DRM is dependent on a variety of factors including a country’s economic structure, natural resource endowments, tax administration capacity, and inherent beliefs about taxation. Accordingly, donors and IOs have centered their efforts in a country on a wide range of policy, institutional, and administrative reforms, often working on them concurrently with other players and in the same tax area. Although donors and IOs are working collectively towards the goal of enhancing DRM, they are each measuring and evaluating the effectiveness of their engagement in their own way.

This isn’t necessarily a cause for concern. Part of the heterogeneity of evaluation mechanisms and objectives is indicative of DRM’s broad determinants and differing country circumstances (for example, the extent to which the VAT law is complied with and the tax system’s dependence on natural resource taxes). DRM projects/advice focuses on diverse tax areas, including value-added tax (VAT), excise, property, personal, and corporate income taxes and on a wide range of administrative functions including digitalization, tax code simplification, modifications of tax payment processes and audits, education and trainings for tax administrators and public officials, and registration/formalization of businesses operating in the informal sector. Each of these efforts enhances the effectiveness and efficiency of the tax system but it would be difficult to compare their efficacy vis-à-vis one another.

What may be of concern, however, are differences between the broader strategic objectives, diagnostics, and evaluation mechanisms used by donors and IOs. Until recently, different institutions have organized their DRM engagement with varying considerations in mind, such as raising more revenue to expand fiscal space, enhancing private sector development and the investment climate, or reducing corruption. When not aligned coherently, this mix of objectives can be confusing to governments receiving policy advice and assistance. Moreover, these differences can make evaluating outcomes problematic.

Notwithstanding the varying focus of donors and IOs, virtually all DRM initiatives are uniquely focused on generating additional revenue. In the case of ATI, for example, objectives include improving tax-to-GDP ratios, tax administration performance, and the business environment. Similarly, the Revenue Mobilization Trust Fund of the IMF (RMFT-IMF) focuses on average tax-to-GDP and average tax gaps in beneficiary countries as strategic indicators. The US Agency for International Development and the Millennium Challenge Corporation (MCC), on the other hand, evaluate their projects using metrics such as cost-effectiveness and economic rate of return (ERR) to ensure additional revenue collection. For example, EER must pass a 10 percent rate for a DRM project to be approved by MCC. And in general, actual ERR rates are higher for DRM projects.

However, focusing on revenue ratios alone can undermine the achievement of SDGs

Basing performance solely on revenue ratios or economic rate of return without considering the economic, developmental, and distributional effects of tax policies may lead to undesirable consequences. A focus on tax ratios, for example, may distort incentives for tax officials and revenue administrations at the expense of transparency, efficiency, and equity. Most developing countries spend significantly less than advanced economies on social transfers to offset the regressivity of consumption taxes and what they do spend is not well-targeted to the poor. This means that policymakers and others should also focus on the composition of taxes—and not merely on overall revenue ratios–and seek to strengthen the capacity of these countries to expand the use of progressive taxes on income and wealth.

Unfortunately, the emphasis on equity and fairness is lacking in DRM projects.  According to Oxfam, only 7% of DRM projects had clear goals on equity or fairness in 2017, representing only a marginal increase from 3% the year before. This is especially important given that revenue collection in LIC/LMICs is increasingly reliant on VAT which may place a disproportionate burden on the poor if not balanced by effective transfer programs and/or improved tax design.

Equity concerns extend to medium-term revenue strategies (MTRS), which are comprehensive tax reforms developed by IOs in collaboration with countries to be implemented over the next 5-10 years. While Indonesia and Papa New Guinea, two countries in the early stages of implementing an MTRS that is in public domain, have stated objectives for improving equity or fairness of the tax systems, neither have detailed on how they plan to achieve them, or crucially, have set forth explicit criteria for measuring their progress within the MTRS. In Indonesia, progress on equity is to be gauged by perception surveys.

The lack of explicit focus on equity doesn’t necessarily mean that DRM projects would not have any beneficial effect on equity over time. Improvements in auditing capacity, for example, contribute to equity by ensuring that companies and individuals that have the capacity contribute their fair share. Likewise, efforts to digitize tax procedures and reduce transaction costs associated with tax payments can promote equity through improved accountability and transparency. But these effects cannot offset the short-term regressive consequences of the overall tax system.

Ultimately, the major objective of DRM is not achieved if resources are wasted on inefficient programs and projects. A cursory look at the DRM programs sponsored by donors and IOs suggests that there is noticeably less attention given to improving the quality of expenditures. This is significant given that even modest corrections of expenditure inefficiencies can generate substantial resource savings (of up to 3 percent of GDP). To put it differently, if the bulk of targeted increases in domestic revenues (5 percent of GDP) are not well utilized, the likelihood of achieving the SDGs will become even more remote. More importantly, inefficiency cuts into spending on social safety nets, which could in turn disincentivize citizens from paying taxes and reinforce their mistrust of government’s spending programs.

The bottom line: First, donors and IOs should begin paying as much attention to equity-enhancing taxes in their financial support, technical assistance, and policy advice on DRM as they do to aggregate tax ratios. The equity objectives should become part and parcel of their evaluation mechanisms. Second, the MTRS under discussion with several countries (e.g., Egypt, Lao PDR, Senegal, Thailand, and Uganda) should establish explicit criteria for assessing progress on equity. The criteria could include the share of progressive taxes in total tax collections and incidence of taxation on the poor. Finally, donors and IOs should support LIC/LIMCs on improving the quality of spending. In fact, there is a strong case for including an expenditure-efficiency enhancing component in DRM projects.

Focusing merely on the revenue side of the budget is not enough if we are serious about achieving the SDGs.

Magdi Ahmed is a research analyst in the African Department of the International Monetary Fund (IMF). Prior to joining the IMF, Magdi provided analytical and organizational support to CGD’s Sustainable Development Finance program. His research focuses on domestic resource mobilization in low-income and lower middle-income countries, particularly concerning the role of policy advice and technical assistance from bilateral donors and multilateral institutions.