On Aid and Climate, Don’t Make the Poor Pay Twice 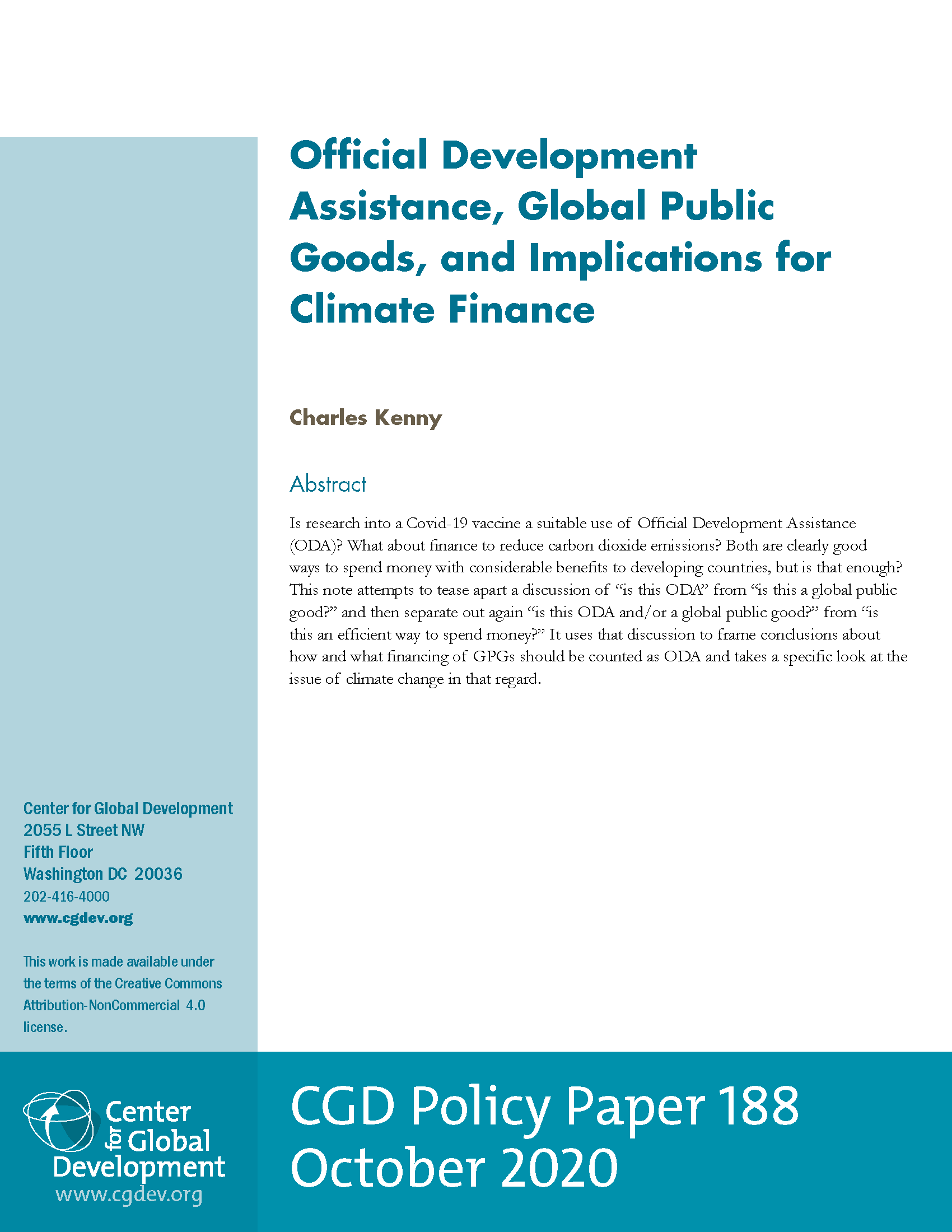 A few months ago, the experts at the OECD who decide what’s in and what’s out when it comes to what counts as official development assistance (ODA) said spending on research towards a Covid vaccine was out. “It contributes to addressing a global challenge and not a disease disproportionately affecting people in developing countries,” they argued. That decision highlighted a long-running debate about the relationship between financing to respond to global challenges and ODA that I try to unpack on a new paper.  The discussion covers issues from asteroid defense to vaccine development but, at least in terms of the current size of spending, it is most pressing when it comes to the issue of climate change. And I worry that we’re making the poor pay twice when it comes to ODA and climate finance.

Poor people worldwide aren’t responsible for climate change but they will suffer the most from it.  Low-income countries account for six percent of global emissions and an even small proportion of the stock of greenhouse gasses already in the atmosphere. But those same countries are set to see some of the most damaging temperature changes as a result of warming. And poor communities are those that can least afford adaptation measures from sea walls, to irrigation systems, and air conditioning units.

Income is an enabler of adaptation–it provides people the resources to respond. And aid to the poorest countries is a force for income growth. ODA isn’t the only, or even the primary factor behind rapidly declining global poverty, but a recent estimate suggests that a one percentage point increase in the aid to GNI ratio in a recipient country raises income growth by approximately 0.35 percentage points. Focus aid on more rapid development in the poorest countries and the returns could be considerable.

But as part of the Paris accords, developed countries committed to scale up climate finance to developing countries by providing USD 100 billion annually for mitigation and adaptation. And as Fiona Ryan of the Climate Action Network has pointed out, they are busy using aid budget to help meet that target (look out for more on this in the coming weeks from CGD’s Euan Ritchie and Andrew Rogerson). Total ODA delivered to developing countries from members of the OECD DAC, excluding humanitarian support, was $56 billion in 2018, $53 billion in 2015, and $51 billion in 2008, which suggests the aid flowing under the umbrella of climate finance isn’t in fact additional, it is substituting for other aid or has been relabeled as climate finance.

It’s worth noting that $56 billion is a drop in the bucket compared to the cost of climate mitigation: the estimated annual cost to reduce global emissions by 50 percent is one percent of global GDP. I note in the paper that is worth about $873 billion at market rates. The battle to preserve the global climate will be won or lost in wealthier countries, depending on the speed they research, develop and roll out low carbon solutions covering energy, transport, construction, and agriculture. Diverting all of ODA to climate would be both woefully insufficient and considerably misdirected as a response to the climate challenge. It would also mean that poor people would end up suffering the effects of climate change without the benefit that aid could have provided in terms of ability to adapt.

ODA is meant to be financing provided with the promotion of the economic development and welfare of developing countries as the main objective. There are numerous projects that can have a considerable impact in terms of immediate welfare outcomes in those countries as well as slowing climate change or helping with adaptation, from renewable energy through irrigation to forest conservation. But as Inge Kaul has argued, to count as ODA those projects need to be justified on the grounds that they benefit the recipient country, not the planet as a whole. More broadly, aid shouldn’t be diverted away from high return projects in the poorest countries in order to help rich countries build a façade of global climate solidarity. Surely we’ve all had enough of that kind of phony accounting these last few years.