A Bank for the World? | Center for Global Development | Ideas to Action Skip to main content

A Bank for the World?

Earlier this week, the Financial Times reported that the United States Treasury Department—the largest shareholder in the World Bank—delivered a letter protesting the Bank’s continued failure to meet the urgency of the biggest shared global challenges we currently face. The letter described “specific gaps and room for increasing climate ambition” and called for more “forceful and constructive leadership” from the Bank.

This isn’t a fringe position: at a time when governments seem able to agree on very little, the consensus around the Bank’s need to scale up its engagement on climate and other global public goods (GPGs) is striking. But “scaling up ambition” is vague, and there remains a great deal of work to do to pin down what it means in practice for the World Bank to rise to the GPG challenge, institutionally. It’s unclear what doing more on global challenges would imply for the Bank’s overall mission, products, country engagement, and financing model: these details need to be fleshed out. Whether the World Bank can evolve into a climate and GPG Bank will ultimately hinge not just on shareholders’ ability to arrive at a common vision but also their ability to agree on the details of a coherent plan and ambitious financing package to get there. In a new note, published today, we set out how it can get there.

As one of the only truly global institutions, the World Bank is uniquely positioned to be the world’s premier source of funding for GPGs. But despite its global coverage, the World Bank has never truly been oriented towards global challenges. Its mission has been defined primarily by individual developing country problems and priorities. This makes sense when the mission is only growth and poverty reduction domestically, but less when assessed against the progress required to avert catastrophic climate or health events.

For that to change, the Bank’s financing for GPGs must become much larger and more effective, or it will fail to make a meaningful and measurable difference. The World Bank is already a major source of external finance for GPGs: between 2016-2021, it delivered $109 billion in climate finance, with annual commitments now exceeding $20 billion. But the scale of the financing requirements to address global public bads vastly exceeds the World Bank’s current financing capacity. And despite the headline figures, much of the GPG agenda has been deployed via trust funds and sometimes coordination with financial intermediary funds (FIFs), but these are small in size and ad hoc in relation to the Bank’s core agenda. (There is a small GPG fund financed by IDA reflows but amounts and functions to date have been too small to yet be significant.)

Disbursements from World Bank Recipient-Executed Trust Funds compared to IBRD and IDA, FY15-FY19 (in US billions)* 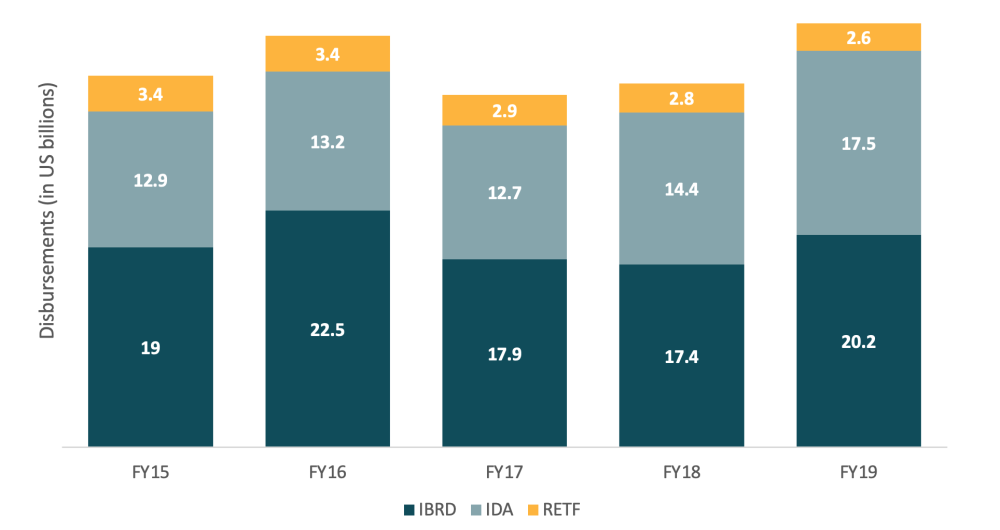 Addressing these weaknesses in the GPG response complements the existing country-based lending model but requires adjustments in approach and new tools that are more attractive to recipient countries. Country demand is at the heart of the World Bank’s existing model, and borrowing for GPG programs domestically often fits uneasily with restricted fiscal space and domestically determined policy priorities. And the calculus of a government’s demand for borrowing in this area is different depending on the salience of differing GPGs to different kinds of countries. A Bank that addresses GPGs effectively needs an offer that countries find attractive.

Alongside this, the Bank needs to directly confront trade-offs between development and GPG actions and take a clear stand on where it makes sense to use the marginal dollar raised to address one or the other. It may well be that in some countries, it is more efficient to use newly raised resources on development, until some absorption or returns bottleneck is reached, at which point spending shifts towards GPG priorities. Any credible GPG agenda will also need to be underwritten by a large grants funding stream, including for middle-income countries. Governments have little incentive to borrow to invest in programs where the benefits may not be directly captured the country, but they still must repay the loan. All of this points to an expansion, rather than just a reconfiguration of the Bank’s operations.

Such an expansion will mean more money but also new policies, pricing, and incentives, and models of financing for GPGs. There is—as the Treasury’s letter suggests—an urgent need for leadership, analysis, and directed financing of different kinds in policy and operations that can drive long-term, measurable progress towards global goals. To operationalize these approaches, the Bank will not only need to find a practical way to define what is (and what is not) a GPG and measure externalities associated with investments, but also to understand the possibilities for differential subsidization of the externalities across projects of different kinds as well as countries at different income levels. GPG solutions may require creative thinking and financing non-sovereigns in-country or at regional/global levels. Without new ideas, the Bank may run into the same kinds of difficulty it encountered in providing an early guarantee or lending to COVAX, the vaccine pillar of the Access to COVID-19 Tools Accelerator (ACT-A).

There is a clear hunger for the World Bank to be a leader on GPG issues, not only as a financier or vehicle. The Bank brings analytical capabilities, capacity building, and intellectual leadership to both country development and global challenges. The global system lacks an effective focal point in the fight against global public bads. Deploying the World Bank effectively, both as a financial and an intellectual leader, can fill that gap.

Keep an eye out for our upcoming work on MDBs for a global future.