Beneficial Policies Towards the Venezuela Crisis Depend on Development Finance

The political and economic crisis in Venezuela has caused the biggest population movement in recent Latin American history. Last year, 5,000 people fled the country every day. As of October 2019, 4.6 million men, women and children have left, almost 15 percent of the population. The majority have settled in countries in the region, like Colombia, Ecuador, and Peru. While the initial response from these countries was positive (over two million residence and regular stay permits have been granted), recent policy changes have created a more restrictive environment.

Support from the international community has predominantly focused on short-term humanitarian assistance, which will remain important for the most vulnerable Venezuelans. However, in what has become a protracted displacement crisis, it is also essential to shift to a longer-term vision and approach underpinned by development finance. The Inter-American Development Bank (IDB) and the World Bank have set up funds with the aim of turning this migratory flow into a development opportunity, but they are under-resourced.

Mobilizing additional resources will require stronger political will from both donors and host countries. They should agree a clear vision of how financing could support beneficial policies for both Venezuelans and host communities, including:

Steps forward and back: A shaky regional response

The vast majority of those who have fled Venezuela have settled within the region (see figure 1). The three largest hosting countries—Colombia, Peru, and Ecuador—together host over 2.7 million migrants. For many Latin American countries, the response to the Venezuelan crisis has been a cycle of strategic policy advancements and subsequent retrenchments. As evidenced by the productive policy dialogue at the Quito Process (a regional forum for coordinated response) many governments are clearly interested in implementing orderly, productive responses. However, rising xenophobia and short-term strain on local systems have also created backlash.

Figure 1. Where Venezuelan migrants have settled 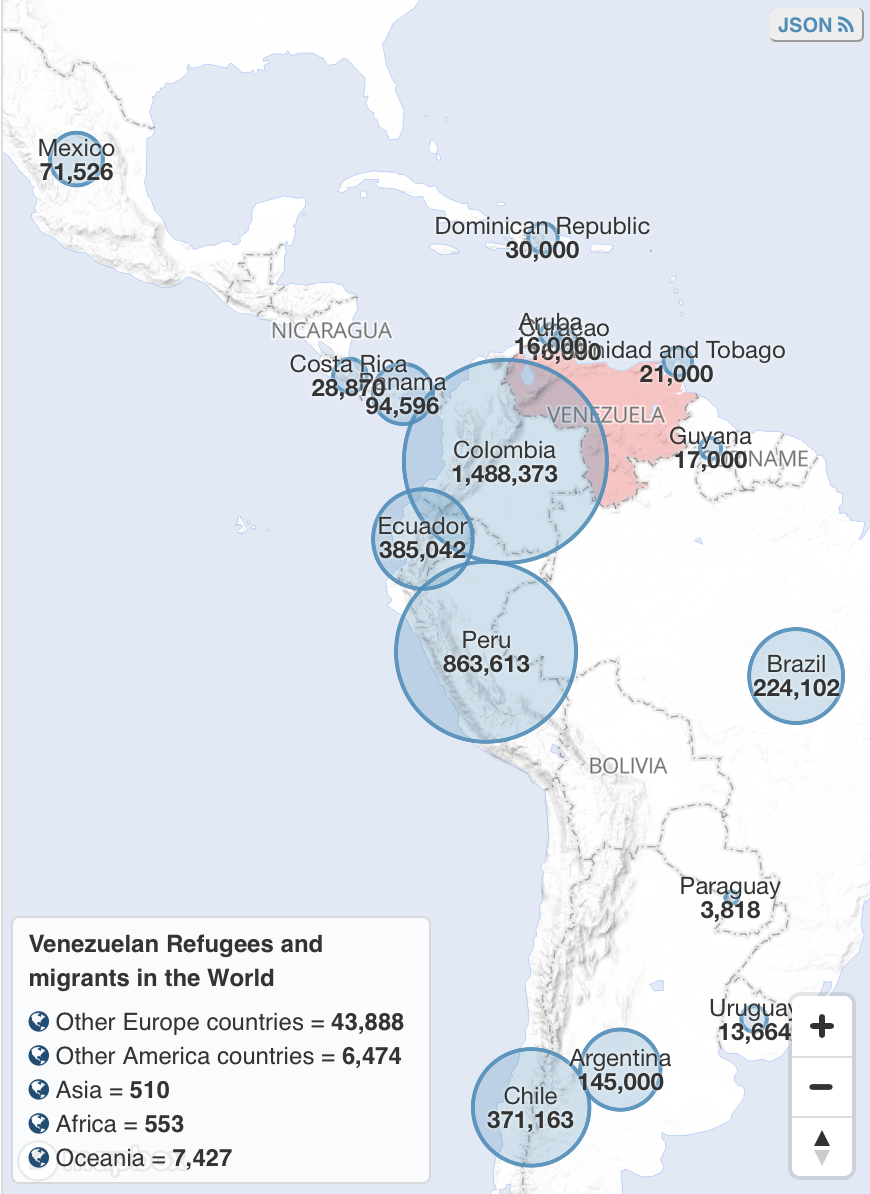 In the early stages of the Venezuelan crisis, Peru led the way. It was the first country in the region to grant work permits to Venezuelans and has issued over 370,000 to date. However, six months ago, the government erected significant barriers to the entry of Venezuelans and their access to regular status. Now, for Venezuelans to enter they must either have a passport and visa, or apply for asylum. But few families can access visas, and most of those who have undergone a refugee status determination process have been rejected. The government is also cracking down on irregular border crossings. The result has been a sharp decrease in regular entries and an increase in deportations back to Venezuela.

Ecuador has made similar changes, while also making laudable progress on committing to regularizing the status of those within the country. By May 2019, Ecuador had provided the temporary right to stay to over 100,000 Venezuelans , the result of a vacillating process of progress and setbacks. In July, the government announced that past legal entrants would be provided with the right to stay, but future entrants would require a visa, passport, and clean criminal record certified by Venezuelan authorities. Unfortunately, it seems only about 10,000 Venezuelans will benefit from the regularization process (a small number compared to overall flows), while many more will be restricted from entry.

Meanwhile, Colombia has maintained steady (though imperfect) progress towards integrating Venezuelan migrants into the economy and society. The government still allows migrants with passports (even expired ones) to enter the country on tourist or transit visas. And although work and residence permits have not been issued on a large scale since December 2018, Venezuelans with formal job offers will soon likely be able to apply for a new work permit, the Permiso Especial de Permanencia para el Fomento de la Formalización (PEPFF). The government has not announced, however, when exactly this permit will be implemented and how widely known or used it will be in practice.

Support from the international community to these countries has mostly been in the form of humanitarian aid. In 2019, donors contributed $443.2 million for emergency relief for displaced Venezuelans, mostly through the UN’s Regional Response Plan. The UN appeal for 2020 has almost doubled in size, which will put pressure on donors to renew and increase their contributions. Short-term relief will remain important for vulnerable Venezuelans who need immediate protection, food, shelter, and medical assistance, who have crossed the border and are on the way to their final destination. It will also be vital for the people living in border areas inside Venezuela who cross into Colombia just for the day to access food and basic services.

But humanitarian aid is not enough. A more sustainable vision, underpinned by adequate resources, is needed to prevent refugees and migrants from falling into a cycle of dependence and despair, but also to make host communities more prosperous. If not managed proactively as a development opportunity, there is a danger that this migratory flow will put an even bigger strain on public services and finances and will generate greater political tensions in host countries.

Multilateral development banks have risen to the challenge. The World Bank granted Colombia access to its Global Concessional Financing Facility (GCFF) in January and is considering granting access to Ecuador too. In May, the IDB announced that it will provide $100 million in grants from its special facility, in addition to its regular loan operation in the region worth $800 million. The GCFF relies on grants from bilateral donors to reduce the cost to Colombia of the $750 million loan operation. However, to date, just $31.5 million has been raised. Similarly, bilateral contributions are expected to complement the IDB fund, but only an additional $7.5 million has been announced so far.

Mobilizing additional finance will require strong and sustained political will from both host governments and donors, as well as engagement from the business sector. The initiative to establish a Group of Friends of the Quito Process agreed on in Brussels this October is a positive move towards greater interaction between countries in the region and donors. Meetings of the Group of Friends in the coming months will hopefully lead to commitments to provide greater financial support. To get there, the first step should be to agree on a common vision. Future finance should be matched by policies that are beneficial to both Venezuelans and host communities:

Funding should be contingent upon the availability of legal pathways for Venezuelans into Colombia, Ecuador, and Peru. While each of these countries has legal channels available, they are often short term and can be extremely difficult for many Venezuelans to access, particularly if they do not have a passport and other required documents, or the necessary resources. Seeking asylum is still an option, albeit an unattractive one as, in several countries, asylum-seekers are not allowed to work for the duration of the asylum process and where they are, obtaining formal work is difficult in practice.

This presents several problems. First, a reduction in legal pathways in some countries increases flows to those countries that remain more open. It then becomes more difficult for the relatively open countries to remain open, creating a domino effect and leading to further restrictions. Currently, the situation in Ecuador and Peru has made it more difficult for Colombia to maintain open, progressive policies. Second, as the domino effect intensifies, more and more people will be forced into irregular channels. This can make it more difficult for countries plan their response. It can also fuel insecurity and increase risks for migrants.

Development funding should therefore be conditional on adherence to the Quito Process agreements on standardized entry requirements, and should focus on maintaining and harmonizing regional legal migration channels.

Development finance should promote residence and work permits and access to the formal labor market. While Colombia, Ecuador, and Peru have all taken measures to regularize their migrant populations and provide them with the right to work, most Venezuelans are not legally allowed to enter the formal labor force.

This lack of access means unnecessary costs and foregone benefits. If migrants were allowed to work formally throughout the entire labor market, wages and employment rates for citizens would likely rise, and migrants would be more productive. This would allow them to make more money, spend more money in the economy, pay more in taxes, hire more people, and generally contribute more to economic growth. Higher incomes for Venezuelans would lead to greater self-reliance and thus less aid dependency. Formal labor market access could also reduce exploitation and abuses in the labor market.

Another tenet of the Quito Process is a shared standard for residence and work permits. Development finance should be linked to progress on this front. It could also be linked to further labor market integration for those who already have the right to work but, despite high levels of qualifications, remain in the informal sector. For example, a lack of information about workers’ rights could be addressed through campaigns. In Colombia’s case, more information around the forthcoming PEPFF permit would be especially useful. Governments could also invest in improving processes to help migrants certify in their host country the skills and credentials gained in their home country - currently a major barrier, especially for high-skilled migrants.

3. Expanding development financing to the most affected regions

If approached correctly, development finance will yield shared benefits. Aside from incentivizing policy progress, sustainable finance is crucial for countries to be able to connect skilled Venezuelans with job opportunities, revitalize overburdened education sectors, and create economic opportunities for other vulnerable populations. For example, in April, the Colombian government announced $229 million of investment to regions most affected by recent migration. Targets include the education and health sectors, renewable energy, water and sanitation, and small business development. By expanding the labor supply and providing much-needed capital, this should expand economic development in these regions (some of the most underdeveloped in the country). International funds can finance such approaches, incentivizing policies that benefit both Venezuelan migrants and host communities, and contributing to long-term development.

In responding to the Venezuelan displacement crisis, there is more at stake than alleviating humanitarian needs. Countries hosting large numbers of Venezuelans have not only shown great solidarity, but also provide an important regional and global public good. As the political and economic crisis in Venezuela shows no sign of abating, the UN estimates that there will be 5.5 million Venezuelan refugees and migrants in the region, and 6.5 million globally, by the end of 2020. Governments are struggling to maintain the same level of generosity while their citizens are increasingly concerned about competition for jobs and pressure on public services. Governments have already started to revert to regressive policies towards Venezuelans, and there is a real risk of increased tension between Venezuelans and host communities. Moving swiftly to developmental approaches and financing would not only allow Venezuelan refugees and migrants to become self-sufficient, it could also help address structural development challenges in host countries and maintain stability.

This blog is part of the Expanding Labor Market Access (LMA) for Refugees and Forced Migrants initiative, run by the Center for Global Development and Refugees International. The initiative, funded by the IKEA Foundation, Tent Partnership for Refugees, and Western Union Foundation, will generate evidence on the economic, social, and protection effects of granting LMA; develop recommendations to maximize its benefits; and support efforts to mobilize the private sector to make the business case.