New results from a famous experiment in Kenya have sparked heated debate over whether lump-sum cash transfers have any long-term benefits for those who get them, or even do harm to neighbors who don’t.

“Just give people money.” For several years now, that has been the mantra of some of the leading voices in development economics, like those of Chris Blattman and Paul Niehaus who argued back in 2014 in Foreign Affairs that foreign aid is wasted on cows and chickens, microcredit, or vocational training, and we should focus instead on just giving people what they really need—cold, hard cash. So the wonkier corners of the global development blogosphere and twitterverse got quite worked up a couple weeks ago when the World Bank’s Berk Ozler dissected the results of a new long-term study of cash transfer recipients run by the NGO GiveDirectly in Kenya, arguing there was little evidence of long-term benefit, some evidence of harm to neighbors, and accusing cash transfer advocates of ignoring inconvenient facts.

Unless cash recipients literally spent the money on gasoline to set fire to their neighbors' farms, the scope of negative spillovers required to explain the Kenya results seems implausible. Ozler is right that we can’t formally rule out the possibility, but for policy audiences this is probably too pessimistic a summary of what happened in Kenya.

Nevertheless, the Kenya results can’t be read in isolation, and the pessimistic reading matches several recent findings of negative spillovers from cash, as well as mixed long-term effects from lump sums. The totality of the evidence seems to point in the direction many governments are already headed: toward  sustained, periodic cash transfers as a social safety net that is carefully targeted or even universal, rather than once-off cash drops to encourage everyone to become an entrepreneur.

So what happened in Kenya? Some simple, unsatisfying arithmetic

In 2011, a new charity called GiveDirectly picked a random sample of a few hundred poor households in rural Kenya and gave them about four-hundred dollars in purchasing-power parity terms, no strings attached, transferred directly to their phones via Kenya’s ubiquitous mobile payments system, M-Pesa. GiveDirectly became the darling of Silicon Valley philanthropy world, and journalists from the around the world flocked to Western Kenya. Now fast forward to January 2018. Johannes Haushofer of Princeton and Jeremy Shapiro of the Busara Center for Behavioral Economics in Nairobi have just released the results of a three-year follow-up to the GiveDirectly randomized trial. What they found was a bit puzzling.

Households who had been randomly selected to receive cash were much better off than their neighbors who didn't. They had $400 more assets—roughly the size of the original transfer, with all figures from here on out in PPP terms—and about $47 higher consumption each month. It looked like an amazing success.

But when Haushofer and Shapiro compared the whole sample in these villages—half of whom had gotten cash, half of whom hadn’t—they looked no different than a random sample of households in control villages. In fact, their consumption was about $6 per month less ($211 versus $217 a month). 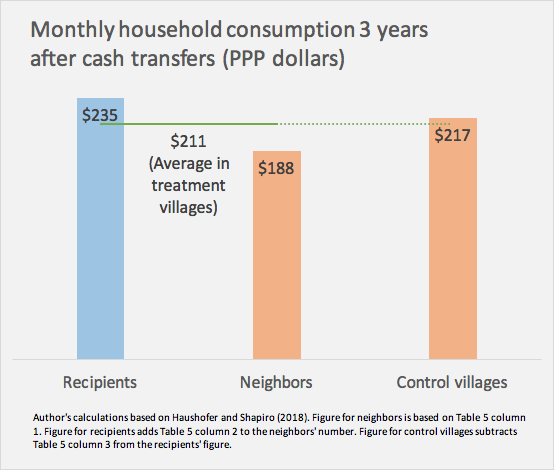 There are basically two ways to resolve this paradox:

The logic of the first option was laid out in excruciating and quite persuasive detail in Berk Ozler’s series of posts on the World Bank website. The question is whether this is “just” a damning critique of the most optimistic readings of the Kenya results, or an actual explanation of what happened. I’m skeptical of the latter.

Giving people cash can hurt their neighbors, both psychologically and even nutritionally—but that’s unlikely to explain the Kenya results

In order to explain away the gap in consumption between cash recipients and their neighbors, the negative side-effects in Kenya would have to be enormous. While half the sample got treated, in the broader population, only 9 percent of the 100 households per village was treated. If negative spillovers are real, there’s little reason to think they’re limited to the research sample. Extending the results to the broader population would imply giving $400 to nine poor households in a village raised their consumption by just $17, while reducing the consumption of the other 91 households by about $30 each. That’s $2,530 in harm and just $153 in benefit per month.

Nobody has suggested any plausible mechanism by which the program could have done an order of magnitude more harm than good.

That is not to say negative spillovers from cash transfers aren’t a thing. They definitely are.

In a previous paper, the authors of the Kenya study noted that cash transfers had fairly acute, short-term negative effects on the happiness of neighbors who didn't get cash. And that matches evidence from an earlier experiment with adolescent girls in Malawi, where those who didn't receive cash transfers reported significantly higher mental distress.

While those are “just” psychological effects, there is also evidence of more tangible harm to neighbors through the channel of inflation. In Mexico, researchers found that the government's flagship anti-poverty program that covers 5.8 million households had a positive but negligible effect on food prices. In the Philippines, the problem was much more severe. Just last month the World Bank concluded that the Pantawid program that distributes roughly $20 per month to 4.5 million poor households increased the price of protein-rich foods by 6-8 percent, and led to a 12 percentage point increase childhood stunting among non-beneficiaries in the treatment villages.

How can we avoid these pitfalls? The Mexico study found that distributing food in-kind reduced food prices for beneficiaries and non-beneficiaries alike, as the laws of supply and demand would suggest. The authors of the Philippines study argue that where the program covers a large majority of rural households, making it universal would be a simple way to avoid harm to neighbors.

For the research community, there’s an even more obvious lesson: ethics committees should probably greet future research proposals to randomize cash distribution at the individual or household level with considerable skepticism.

If poverty traps are real, one-time cash transfers should have permanent effects. Evidence is mixed.

Think of the GiveDirectly experiment as part of a scientific enterprise searching for a once-off, permanent “cure” for poverty. That search is built on textbook theories of poverty traps, the idea that poverty is inherently self-perpetuating. Contrary to what the name might imply, many economic models of poverty traps yield quite optimistic predictions about the effectiveness of welfare programs. One big push—a chunk of cash, or maybe a cow or chickens, perhaps with some business training and a savings account—is all you need to break the cycle of poverty and lift people to a new equilibrium.

It sounds a bit quixotic, but there’s evidence this isn’t entirely crazy.

An experiment in Sri Lanka published in Science in 2012 distributed grants worth $100 to $200 to relatively poor people running micro-enterprises. While women saw virtually no increase in profits, men saw fairly dramatic gains equivalent to a real return on capital of about 6 to 12 percent per month. Most importantly, when researchers tracked the entrepreneurs down five years later, the gains for the men had persisted: they were still seeing profits from the initial capital injection.

Alas, those long-term gains for Sri Lankan men haven’t been replicated quite so successfully anywhere since.

In Ghana, a similar experiment found increased profits in the short term, but after three years the results were inconclusive: there were still some signs of increased profits, but most of the differences were no longer statistically significant. And in Nairobi, giving female entrepreneurs grants of about $200 raised their incomes by 50 percent several months later, but one to two years later all the income gains had disappeared. A parallel treatment arm that included business training fared no better.

Sheep, goats, chickens, and cows have gotten a lot of hype recently too. More precisely, two big randomized trials spanning seven countries found that giving poor households livestock assets together with lots of hand-holding—in the form of business training and savings accounts—led to big consumption gains that endured three years after the asset transfer. The program is expensive though, and only pays for itself if the benefits hold up in perpetuity. Time will tell if that holds true.

Once again, there is a risk here of not just failing, but doing real harm. In a recent presentation of the Nairobi paper above, Pam Jakiela from the University of Maryland noted that while cash hadn’t lifted young women’s incomes in the long term, it had affected their occupational choices—pushing them away from wage employment, toward self-employment in the informal sector, with possible negative consequences for their long-term human capital accumulation.

The idea that we want every poor person to run a bigger microenterprise is not entirely innocuous.

Silicon Valley philanthropies may be fascinated by one-off cash drops, or even a Universal Basic Income, but most large-scale government programs have focused on cash transfers that are (a) sustained over time, and (b) targeted at poor households. That includes the Kenyan government’s own Cash Transfer for Orphans and Vulnerable Children program, which is an order of magnitude bigger than GiveDirectly, but gets much less media attention. The idea is not to cure poverty with a single big push, but rather to provide a permanent, reliable system of social insurance and a supplement to the incomes of very poor people.

Measured on their own terms, these sustained, targeted transfer programs work well.

Across a dozen randomized experiments in sub-Saharan Africa, households consume 74 cents of every dollar received, most of it on food. There is consistent evidence internationally that almost none of the additional spending goes to temptation goods like tobacco and alcohol, and there’s little evidence of cash transfers discouraging work. On the contrary, in the African experiments transfer recipients worked more and earned 16 percent more income. 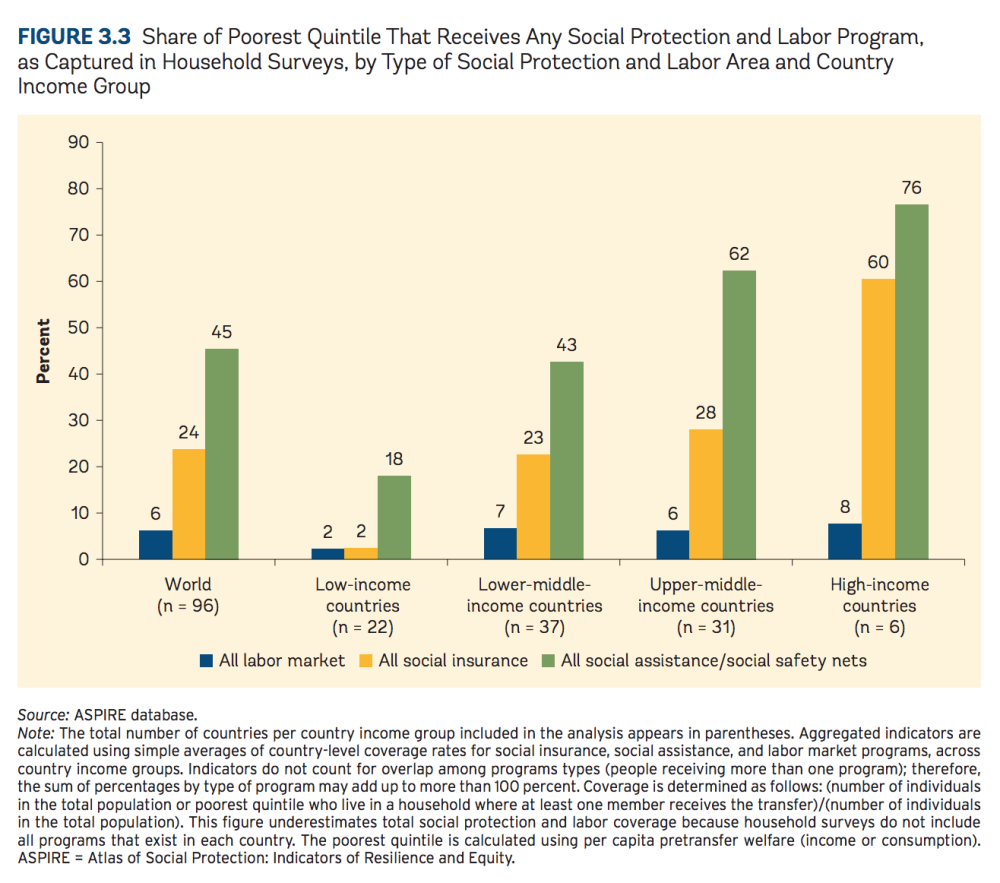 Kids’ human capital, not business growth, is the likely channel for long-term effects from these programs. New evidence suggests cash transfers in Mexico that were conditional on school attendance boosted employment and earnings in adulthood. Even the distribution of casino revenues to Cherokee households in North Carolina has had long-lasting effects on children's education, future criminality, and even personality traits.

At this point I'm singing from the hymnal of cash-transfer advocates. But we shouldn't pretend that we have this all figured out.

This month the World Bank released its annual report on The State of Social Safety Nets 2018, showing that in low-income countries, only one in five people in the poorest quintile benefit from any kind of safety net program. Sustained, government-run cash transfer programs amount to large-scale redistribution, and redistribution is expensive. That's sort of the point.  But in countries with very little budget to redistribute, it makes sense to keep looking for affordable programs with permanent effects on assets and incomes—and to admit when the new evidence is not quite as clear as we’d hoped.