Matti Kohonen of Christian Aid holds out the enticing prospect that African countries could collect an additional 1.5 percent of gross domestic product in tax if only big multinationals would stop dodging. The problem is that this estimate is (still) based on wishful thinking. Multinational corporations should pay tax, but the scale of potential revenues depend on underlying levels of investment and profitability in a country.

Let’s take a look at where the 1.5 percent estimate comes from. It is not an “IMF estimate” based on data from Africa, but a very rough global estimate from a working paper by Ernesto Crivelli, Ruud A. de Mooij, and Mick Keen. As the disclaimer on the front page reads “This Working Paper should not be reported as representing the views of the IMF…Working Papers describe research in progress by the author(s) and are published to elicit comments and to further debate.” Within the paper itself the authors call the estimate “highly speculative.”

The basic logic of the calculation is that if a country’s corporate tax rate falls, its corporate tax base tends to rise. This reflects a combination of economic effects: greater real investment, more incorporation—and policy effects. Countries often combine changes of the tax rate with changes to the way that tax base is calculated. They “lower the rate and broaden the base.” So if a country’s base does not rise as much as might be expected following a tax rate cut, can this be explained by the tax rates of other countries—and in particular of tax havens—and thus be attributed to multinational profit shifting?

Perhaps, but it is also likely to be influenced by factors such as the certainty with which investors view the country’s tax system, and other barriers to investment which prevent them responding to tax rate changes. On the revenue side the amount of tax collected is influenced by domestic tax holidays and the ability to evade taxes domestically.

Furthermore, it is very large compared to the scale of foreign direct investment, and profits by foreign multinationals. Thomas Tørsløv, Ludvig Wier, and Gabriel Zucman last year estimated that the total net profits of multinational companies outside of their headquarters country average around 2 percent of GDP globally. In Brazil, China, and Colombia it is around 1.5 percent of GDP; in India it’s 0.5 percent. Based on these numbers, Tørsløv, Wier, and Zucman estimate revenue losses from corporate profit shifting which are a fraction of the scale of Crivelli, De Mooij, and Keen’s estimates. The graph below compares the estimates (drawing on country level estimates developed by Alex Cobham and Petr Jansky using the same methodology as the IMF working paper). 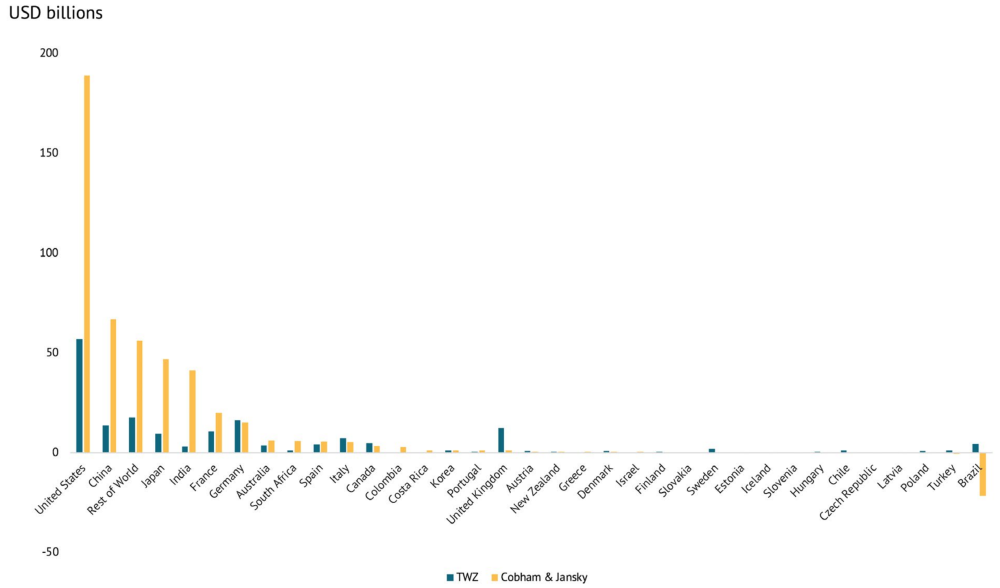 The absolute value of revenue losses for low-income countries from multinational corporate profit shifting is likely to be much smaller than popular perception. For example, Tørsløv, Wier and Zucman’s calculations for India put the gross surplus of all foreign firms at around $15 per capita, suggesting tax revenues at stake are a couple of dollars per person per year.

Mick Keen highlights that the experience of efforts to enhance domestic resource mobilisation suggests we should be distrustful of fads. “The fundamental strengthening of revenue collection will be largely a matter of persistent and unspectacular effort.” Promoting spectacular hopes for gains from international action on multinational corporations risks undermines the persistent and unspectacular effort of policymakers and tax authorities (and of international action to assist them), as well as undermining the morale of citizens to pay tax.