Five Ways That Education Systems Can Support Girls in the Face of Climate Change, Today | Center for Global Development | Ideas to Action Skip to main content

Five Ways That Education Systems Can Support Girls in the Face of Climate Change, Today 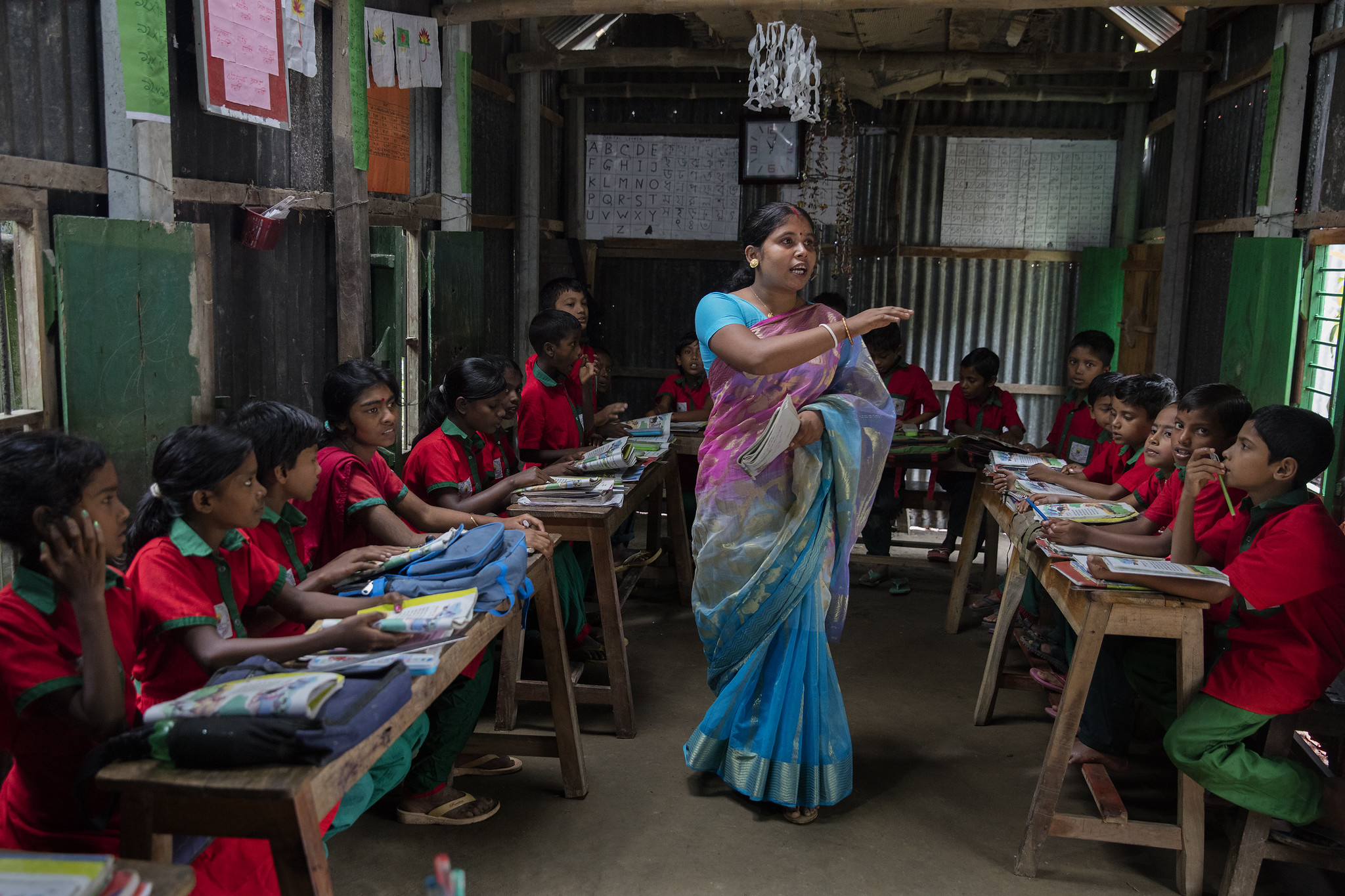 In an accompanying blog we argue that girls’ education is unlikely to reduce future emissions, and that we should not think of girls in low-income countries as ‘assets’ to solve a climate crisis. But there is a link between education and climate change—it’s just the other way around.

A changing climate leads to changes in the frequency and intensity of weather events, which can result in unprecedented extremes. Extreme weather events are particularly harmful for young children. They increase the likelihood of internal displacement, food insecurity, conflict, including age- and gender-based violence, psychosocial harm, and damage to school buildings and transport routes. These may not always be at the heart of education debates. But they are all serious matters which harm the current wellbeing and future potential of girls and boys, including their ability to access and succeed in education.

Children’s and young people’s perspectives are largely missing from the international discussion on education-climate links. We draw on qualitative findings from Gender and Adolescence: Global Evidence (GAGE), the largest global study on adolescence, following 18,000 girls and boys in six countries. In a 2020 study, GAGE teams in Bangladesh, Ethiopia, and Jordan conducted interviews with 788 adolescent girls and boys to understand the ways in which their lives are affected by a changing climate. All quotes below are drawn from GAGE interviews—examples of the voices that are too often left out of climate and education policy.

Here are five ways in which climate events are negatively impacting young people, especially girls, and how education systems can help tackle them.

“The first thing that I fear for my future is lack of rain and drought in our locality. Because if there is no rain here, drought will occur, and then we will migrate to another locality looking for good pasture and water for our animals, and then we will drop out of school, since we can’t get to school in the place where we migrate to.” (14-year-old boy, Afar region, Ethiopia)

The number of children disrupted by extreme weather events, including floods, typhoons, and droughts is typically in the range of 20-80 million each year. Of these, between 5 and 15 million are internally displaced; sometimes for only a short period, other times permanently.

In Afar, Ethiopia, pastoralist households move in search of fertile ground in times of drought. School transfers are often impossible in these situations, leading to dropout. For those whose households rely on agriculture, poor harvests prompt adolescents to move in search of work. Anticipating these disruptions, many children don’t enrol in the first place.

Natural resource changes (such as drought and land degradation) can increase the threat of violent conflict and displacement. To be clear, the evidence shows that climate-related changes are not the sole cause of violent conflict. But they can be a driver where other stresses exist. For instance, in Ethiopia, clashes over fertile land and access to water have contributed to ethnic violence that has displaced an estimated 6.7 million since 2016. Within this number, many adolescents still lack access to schools.

How can education systems help? Options might include providing flexibility for school re-entry,or better arrangements for remote or mobile learning, perhaps building on lessons learned during the COVID-19 response. And when students do return to school, remedial programs can help them catch up.

“This change in climate is the major reason for students to drop out of school. Since most of the parents are poor, due to poor harvest and insufficient rain, they cannot educate their children” (District official, Oromia region, Ethiopia)

The Intergovernmental Panel on Climate Change is confident that increasing temperatures and changing rainfall patterns are impacting food security. Lower crop yields affect child nutrition and food prices and increase poverty levels. Poor households typically spend around 50 to 75 percent of their income on food. And when incomes fall, households are also less able to make fee payments and meet other costs of schooling.

It’s notoriously difficult to attribute single events to climate change, but longer-term physical changes in temperature and rainfall provide new environments for pest breeding. It has been largely hidden by the headlines of COVID-19 but since 2019 parts of East Africa, the Arabian Peninsula, and the Indian subcontinent have been hit by waves of locust infestations. In Ethiopia, swarms damaged over 200,000 hectares of cropland. As a 13-year-old observed:

“There was a locust swarm in our locality. The swarm stayed for one day and one night but it destroyed the grass and every green leaf in our locality and it caused a shortage of grass for animals to eat.” (13-year-old boy, Oromia region, Ethiopia)

How can education systems help? School meals are an important social safety net for children. Yet of the 663 million children enrolled in school around the world, 251 million live in countries where there are significant nutrition deficits and inadequate school meals coverage. For the most part, school feeding has been shown to increase participation but there is evidence they may help children to learn too.

“We do nothing to them but they [male youth] attack us. The other day, it was our turn to use the water… their turn was the day after. They came here and attacked us.” (11-year-old Syrian girl from a refugee camp in Jordan)

We have a global violence crisis. And climate-related hazards put adolescents at increased risk of age- and gender-based forms of violence.

Drought and deforestation mean adolescent girls must travel further and take longer to complete daily chores like collecting firewood and water, which may make them less safe. Girls in refugee camps and remote rural areas noted that they could be subject to harassment and physical violence at water points, given fierce competition to secure water. Multiple adolescent girls in Ethiopia raised fears of experiencing sexual abuse while getting water and firewood, especially if travelling after school and returning at dusk or later.

In yet other cases, girls may face domestic violence if they are perceived to spend an excessive amount of time finishing their chores. A married girl from Ethiopia’s Afar region explained that she is often subjected to physical violence because her husband does not appreciate that fetching water takes longer because of drought:

“My husband beats me regularly.… I may go to the river to fetch water. When I am a bit late, he feels upset as if I am late due to another reason. Then he beats me seriously.” (17-year-old girl, Afar region, Ethiopia)

How can education systems help? We do know something about what works to prevent violence against women and girls. And schools can be effective places to intervene: attempts to reduce violence in schools are roughly as effective as interventions that take place outside of school. We have evidence on how regressive social norms and discriminatory gender attitudes underpin these experiences of violence. And we also have evidence on how to work with adolescents to strengthen social networks and role models and to shift gender-based attitudes and behaviours through schools.

“I fear when forests have reduced and drought has increased. I worry when vegetation has cleared and the number of human beings increases. Moreover, I worry when industries expand and vegetation is deforested in the area. Then this causes air pollution and ozone layer depletion. So, I fear this in the future.” (11-year-old girl, Amhara region, Ethiopia).

Direct exposure to extreme weather events can harm children’s mental health. There is growing evidence on the direct and indirect links between climate change and psychosocial wellbeing, such as anxiety and post-traumatic stress disorder (PTSD). After the devastating 2010 floods in Pakistan, 73 percent of adolescents aged 10-19 experienced high levels of PTSD, with girls particularly affected.

In Ethiopia and Bangladesh, children report that recurrent droughts, floods and landslides cause them high levels of anxietyIn Ethiopia, pastoralist adolescents face strong psychosocial impacts during times of drought, as highlighted by a 12-year-old boy from Afar region:

“I was worried about the animals that were dying. Then I was worried that we might not have anything to eat. I was crying on the roads while walking. I worried too much about the future.” (12-year-old boy, Afar region, Ethiopia)

And in Bangladesh recurrent landslides and flooding cause anxiety, as reported by a 12-year-old boy from Chittagong:

How can education systems help? Poor mental health in adolescence is predictive of future educational underperformance (among many other reasons we should be concerned). Yet schools can be important settings for promoting mental health and providing psychosocial support, thanks to the opportunities for interactions with peers and non-family trusted adults.

“Our children have to face many problems when going to school. During rain the roads go under the water. They can’t cross the roads perfectly. Sometimes they fall in front of vehicles. It’s very difficult for us to send them to school.” (Mother, Cox’s Bazar Bangladesh).

The most direct way that extreme weather disrupts education is in the damage or destruction of school buildings. The 2010 floods in Pakistan destroyed an estimated 11,000 schools. A 2016 hurricane in Haiti damaged over 730 schools. A 2007 cyclone in Bangladesh damaged almost 6,000 schools, disrupting the education of more than 1.5 million students. Extreme weather has always been a challenge, particularly in places with poor infrastructure, but more frequent and intense disasters will continue to have both short- and long-term negative effects on children's education—particularly for girls and children from poorer families.

Climate hazards also make getting to school more difficult, especially for adolescents with disabilities. A 16-year-old boy from the Oromia region of Ethiopia described some of these risks travelling to and from school due to erosion:

"When we returned [from school], the river was eroded. Some children escaped before the rain fell…The flood immediately washed away my friend. He shouted and was fortunately saved.” (16-year-old boy, Oromia region, Ethiopia).

How can education systems help? The Inter-Agency Network for Education in Emergencies has provided minimum standards for school systems since 2010. Within these standards, specific guidance exists for safer school construction in low- and middle-income countries. Schools that are correctly equipped can provide services for local communities—but as an example of how lacking current facilities are, almost half the schools in the world are without basic handwashing facilities.

Children’s perspectives and experiences need to inform global responses to climate change. But there’s a severe shortage of information from the young people who are affected the most. As a start, we’ve set out five ways in which adolescents tell us they are affected by climate change today, and how it impacts their education.

Our list is not comprehensive, nor is it universal: hazards will impact children in different ways at different points of their lives. For instance, children under five are at greater risk from poor nutrition and physical health, affecting their early development. In contrast, adolescents are more likely to face disruptions to education or income-generation activities, with the related impacts on mental health, risks of violence and so on. Nevertheless, looking at the ways that a changing climate is impacting young people can serve as a starting point for discussing the links between climate change and education.

Girls will benefit the most from that effort. Women and children (particularly girls) are most likely to be displaced following a disaster. Girls are more likely to drop out following disruptions to schooling. And in the face of shrinking household budgets, families are more likely to withdraw girls from schools. More education is not going to singlehandedly solve climate change. But with the right tools, education systems can help support children whose lives and educations are being disrupted by a changing planet.