In December 2018, the Gavi Alliance, the organization that helps lower-income countries vaccinate its children, hosted a mid-term review to assess progress towards its core purpose: “reach every child everywhere with vaccines against preventable diseases.”

The good news is that there’s been advances on new vaccine introductions, and an estimated 65 million children were immunized with Gavi-supported new and underutilized vaccines in 2017.  The bad news? There is still huge variability on the measure that counts most for building herd immunity and reducing vaccine-preventable disease: full vaccination for age among children under 2 years old.  This variability raises issues for the organization as it looks critically at its mission ahead of its 2019/2020 replenishment, and is relevant all over the world as recent measles outbreaks in the Philippines and in Washington State starkly illustrate.

The share of children who have received all eight WHO-recommended vaccinations by 12–23 months remains critically low in large middle-income countries (MICs) that are no longer eligible for Gavi support or are being phased out from support in the near future. According to the latest DHS data, for example, Angola (30.6 percent, self-financing), Nigeria (40.9 percent, extended transition),[1] Gabon (3l.6 percent, self-financing), and the Dominican Republic (53.1 percent, self-financing), all fall under 55 percent coverage. And while greater coverage is one challenge to overcome, inequity within countries is a persisting concern as well, as low coverage is directly related to outbreaks of totally preventable and life-threatening disease. In Angola, immunization coverage across the country’s 18 provinces ranges from a low 8.4 percent in Cuando Cubango to a high but still low 49.7 percent in wealthier Luanda. 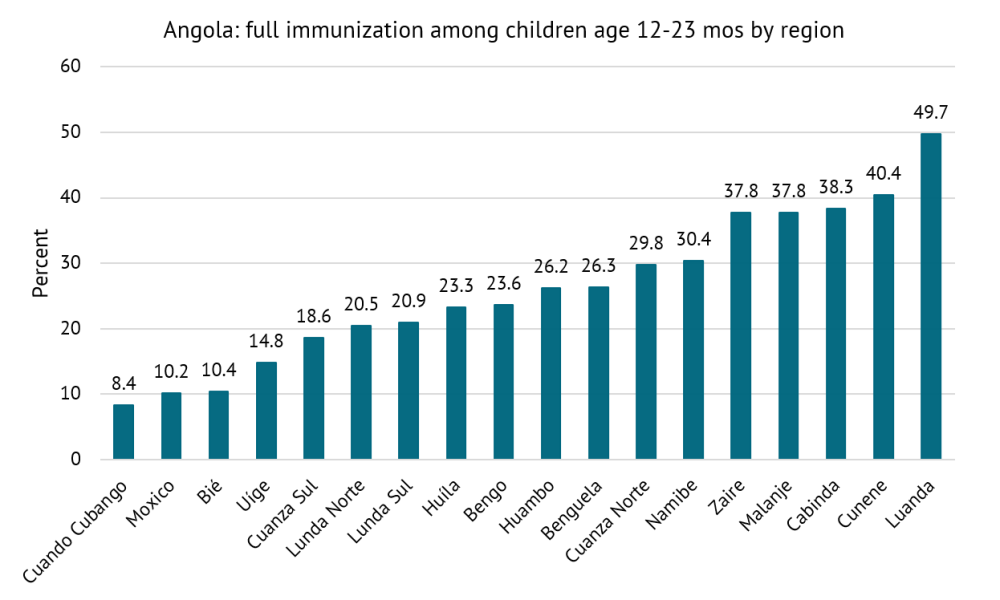 One of Gavi’s analysis documents for the 2021–2025 strategy highlights some of the reasons behind low coverage and inequalities in both Gavi-eligible and transition countries. They include weak health systems, clustering of vulnerable populations in non-eligible MICs, vaccine pricing in non-eligible MICs, conflict, back-sliding coverage in MICs, changing demographics, prevention of and response to outbreaks, and climate change, among others. And a 2017 study found that inequalities in vaccination coverage across 45 Gavi-eligible countries is most strongly associated with low levels of maternal education and poverty (with child sex, child malnutrition, and urban/rural residence also playing a role in some countries). At the top of the list for inequality for the indicators assessed: Nigeria, India, and Pakistan, closely following by Cameroon, Côte d’Ivoire, and Ethiopia.

The case of Ethiopia shows that the story is always nuanced. A Gavi-eligible country predicted to reach middle-income status by 2025, Ethiopia has large geographic inequities in its full immunization coverage—one region, Afar, reaches only 15 percent of young children while Addis Ababa reaches almost 90 percent. Poverty differences between regions don’t seem to explain this inequity or what to do about it; in 2014, the World Bank’s poverty assessment noted that Ethiopia had made huge progress in reducing poverty and that poverty itself was almost equally distributed across the country’s regions. 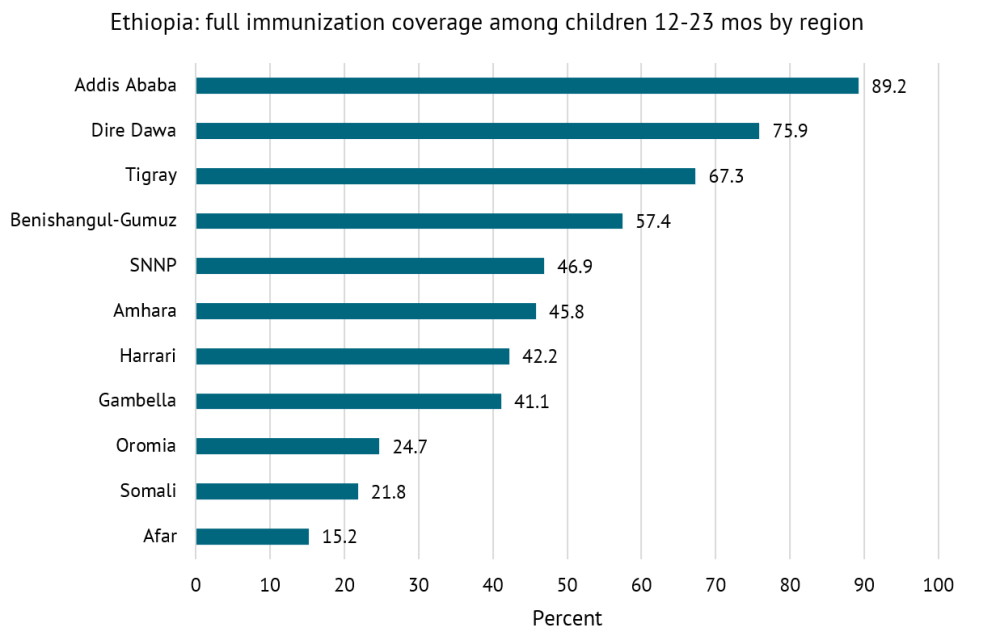 Instead, the problem in Ethiopia seems to have more to do with inequalities in public spending on health: low levels of vaccination mirror low public expenditure on health per capita. The World Bank’s 2016 Public Expenditure Report for Ethiopia shows that regions with lower health service coverage (SNNP, Afar, Gambella, Oromia, and Amhara) received considerably less funding than predicted given their level of need, while regions with large cities such as Addis Ababa and Dire Dawa received much more. Recurrent non-salary per capita public spending on health overall is extremely low, ranging from $1.47 to $5.37, another reason why immunization programs with large non-salary costs may be underfinanced.

Challenges in reaching every child everywhere vary across countries, from resource allocation issues (as in Ethiopia) to conflict to the rise of the misguided antivaccination movement worldwide. Within this varied landscape, Gavi faces the difficult task of creating requirements and systems that are one-size-fits-all. Our view is that Gavi’s 2021–2025 strategy will need to put mandate first and prioritize solutions to the major immunization barriers for both historically eligible countries and the low middle-income countries where population, inequities, and low effective coverage are most concentrated.

There are several Gavi-eligible low-income countries that have expanded full coverage quickly—Bangladesh, Kenya, Malawi, Rwanda, and Senegal, to name a few. The real issue is whether Gavi’s job is done once the GNI-related eligibility transition period ends, or whether progress on the core mandate—every child everywhere reached (as well as global health security and elimination goals)—needs to be considered in deciding on eligibility and continued support.

In 2011, we recommended that country income thresholds be removed as an across-the-board eligibility criteria for global health funding allocations. This would acknowledge that the mandate of global health organizations is to achieve health and coverage goals as the first priority. While modalities of assistance need to change as countries grow economically, there is much that can be done to meet Gavi’s central purpose as part of the organization’s next phase.

With Gavi’s board retreat approaching in March 2019, and the next five-year strategy planning underway, we’ll be watching this space. For many countries eligible for Gavi support from 2021-2025, and for MICs that are falling behind, the impending plans hold great weight. Check back in with us for more in the coming months.

[1] Gavi’s Board of Directors approved an extension to Nigeria’s transition timeline in June 2018.