The Health Financing Transition: Inevitable Change for the Better?

“For though change is inevitable, change for the better is a full-time job.”

When Adlai E. Stevenson made this statement in 1956 he wasn’t thinking about healthcare. But it is actually a good summary of historical trends in health spending, which we analyzed recently in “The health financing transition: A conceptual framework and empirical evidence” (also available here as a CGD Working Paper). It is almost inevitable that health spending will rise in most countries, but the character, efficiency and equity of that spending are something we can alter – if we take that full-time job seriously.

In the paper, we show that health spending in most countries is very likely to increase – and for some very good reasons. Most countries are experiencing rising incomes, people are living longer, and medical care technologies continue to expand. In other words, much of that money is buying more health. It is also likely, but hardly inevitable, that most of that increased spending will be channeled through taxes or insurance premiums rather than out-of-pocket. If countries work for that to happen, health spending will be less burdensome to the sick and the poor.

These two common trends – a rise in per capita health spending and a decline in the share out-of-pocket spending – comprise what we describe as a “Health Financing Transition.” Just like the demographic and epidemiological transitions, the health financing transition provides a conceptual framework for thinking about long term trends which are not inevitable but still remarkably widespread. Like these other two transitions, timing varies for different countries regarding when they start the transition and how quickly they move through it. They may even regress. Some of the determinants are influenced by economic or technological factors but others can be affected by public policy.

This can be illustrated by looking at a particular country. According to WHO, Myanmar is among the countries that spend the least on health – about US$18 per capita in 2011. It is also among those countries with the highest shares of out-of-pocket spending – over 80% of that money is paid by individuals when they are sick and need health care services rather than as insurance premiums or taxes when they’re feeling well.

Yet, Myanmar has demonstrated that it is like many countries in the way its health care spending is evolving. Even before it made its recent commitment to move toward Universal Health Coverage by 2030, Myanmar was increasing its per capita spending on health and reducing its reliance on out-of-pocket expenditures (see Figure 1). 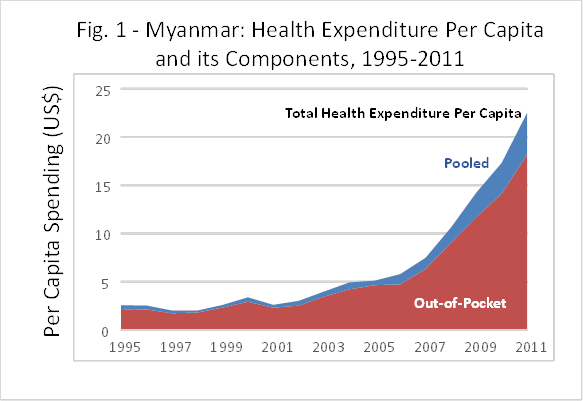 In our paper, we showed that this trajectory is apparent among wealthy countries over the past half century and discernible in a majority of countries over a 15-year period for which data is available

The first part of the Health Financing Transition – rising per capita health spending – is extremely likely in most low- and middle-income countries for perfectly sensible reasons. More people are earning more income and as their incomes rise, they will seek out medical care that was previously unaffordable or inaccessible. The literature demonstrates that health spending is substantially driven by rising income, to a lesser degree by population aging, and additionally by some combination of prices, technologies, and institutional change. Public policies can influence how that money gets spent by regulating private providers, structuring health insurance options, or providing public health care services.

The second part of the health financing transition – the declining share of out of pocket spending – is less predictable because it depends more directly on public policy.  In our analysis, the out-of-pocket share of total health spending was not related to changes in income. It was, however related to changes in a country’s mobilization of public revenues which we interpret as demonstrating the importance of public policies in reducing out-of-pocket spending. We also found a small secular downward trend in the out-of-pocket share which may reflect the ubiquity of social movements – from Ghana to Myanmar – which want to protect people from having to pay for care when they are sick and most vulnerable. Historical accounts provide plenty of evidence to support such a hypothesis.

Countries progress more rapidly through the health financing transition when the pooled share of health spending (i.e. money for health care that is paid through insurance premiums or taxes) is rising faster than out-of-pocket spending. This diagram from our paper shows that countries like Colombia and Thailand moved rapidly along this trajectory between 1995 and 2011; countries like Brazil and India moved slowly; and countries like the Philippines and Uzbekistan regressed. 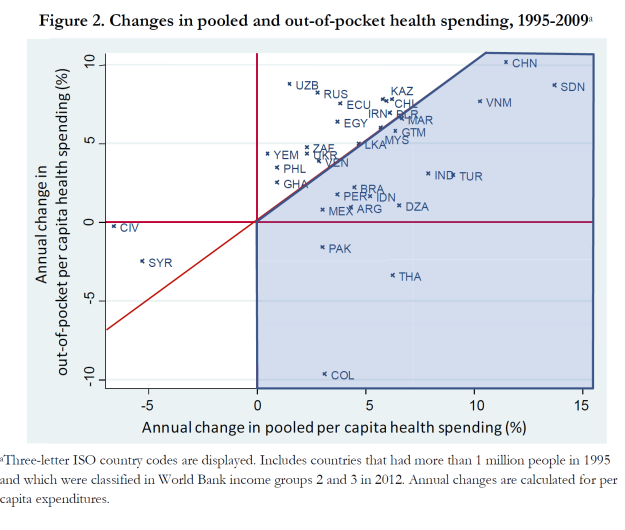 The last decade in Myanmar puts it firmly in the lower right quadrant of this diagram – countries that are progressing rapidly through the health financing transition. But this progress is not inevitable. While pressures for rising health spending are going to continue, progress on increasing the share of pooled spending will require public commitments and good policies. For countries like Myanmar, the commitment to universal health coverage is a commitment to continue to spend more on health and to finance it with pooled funds. Whether it stays on this trajectory or not is in their hands … and it is a full-time job.

For the details and nuances that won’t fit in a blog, please see “The health financing transition: A conceptual framework and empirical evidence” in this month’s issue of Social Science & Medicine.