How Prevalent Is the “Euromanel”?

Christal Morehouse, Alla Volkova, and Silvia Fierăscu of The Open Society Foundation (OSF) have just issued a fascinating report on the gender breakdown of speakers at 23 high-level conferences across Europe—including nine forums, six conferences, four meetings, three summits, and a games and an ideas lab (which adds up to 24 because the World Economic Forum Annual Meeting is a Meeting at a Forum—doubtless why it costs $71,000 to attend).

The OSF team tracks 12,600 speaking roles between 2012 and mid-2017 and finds that across conferences with data for 2012 and 2016 there’s a welcome trend: 14 of the 15 conferences had a larger proportion of women speaking in the later year. But across the sample they still find that overall men occupied 74 percent of speaking roles and women only 26 percent. Women were better represented amongst keynotes and moderators than panelists—where only 24 percent were women.

Some gender equality leaders stand out: Chatham House had 44 percent women speakers at its 2016 London Conference, for example. Chatham House’s Laura Dunkley reports that the institution:

recently launched an internal gender awareness action plan. Covering three strands of Chatham House’s activities, the work will aim to build a toolkit for think tanks operating within international affairs…Specifically on convening and debate, Chatham House is committed to no all-male speaker panels at events and encouraging staff to uphold this commitment when speaking externally. Chatham House places equal importance on creating a greater mix of gender representation in participants, as well as ensuring events and workshops are designed to facilitate and encourage inputs and contributions from all participants.

We look forward to seeing—and learning from—this toolkit. And the OSF report is well worth reading in full both for the data and ideas on how to improve. But OSF doesn’t report on the proportion of European conference panels that are all-male—Euromanels, if you will. So we used the OSF’s dataset to calculate that. 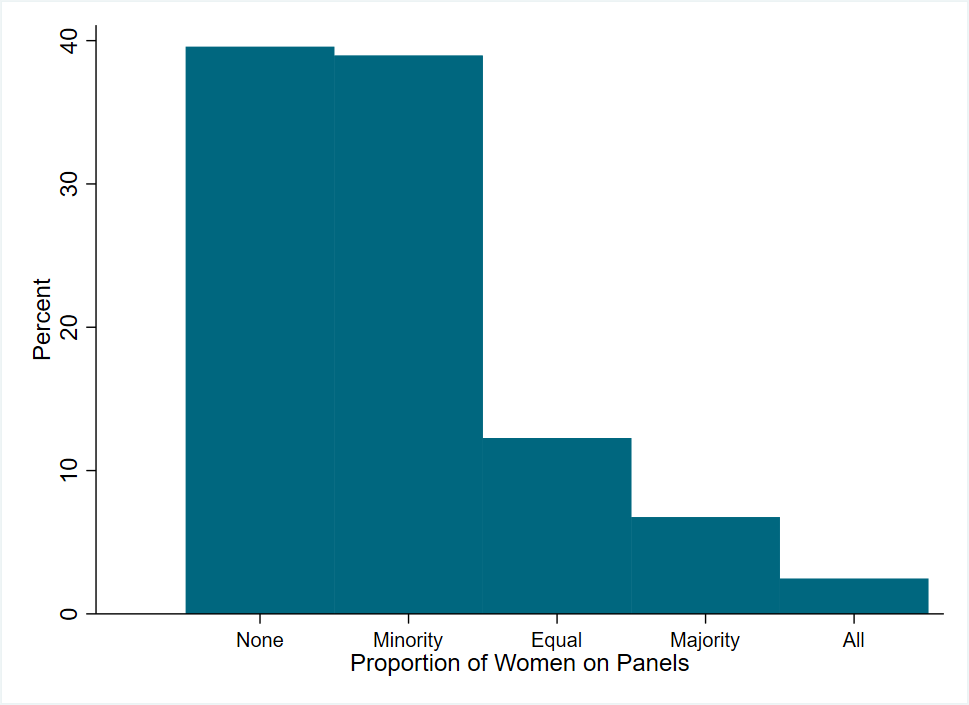 Thanks to OSF for quantifying and highlighting the conference speaker gender gap in Europe. Doubtless the situation is little different in the United States, and we’d love to see data on that.

Data notes: We used the OSF data on panel membership alone (excluding keynotes, moderators, and others), dropping panels that appeared to have only one panelist and a few observations that were potentially duplicate or where the panel name was too generic to ensure it was a separate event from other listed panels. You can download our code here.

Gender and Equality, Rights and Norms