Health is a state rather than national subject in many countries (as we’ve discussed here and here), and in India this tendency has just become more pronounced. Based on the 14th Finance Commission’s recommendations (more here), money coming from the Central government to states will be less tied up and states more free to spend that money in whatever way they want. But will they spend (well) on health, in a country famous for health coverage and outcomes well below those of countries at similar levels of GDP? 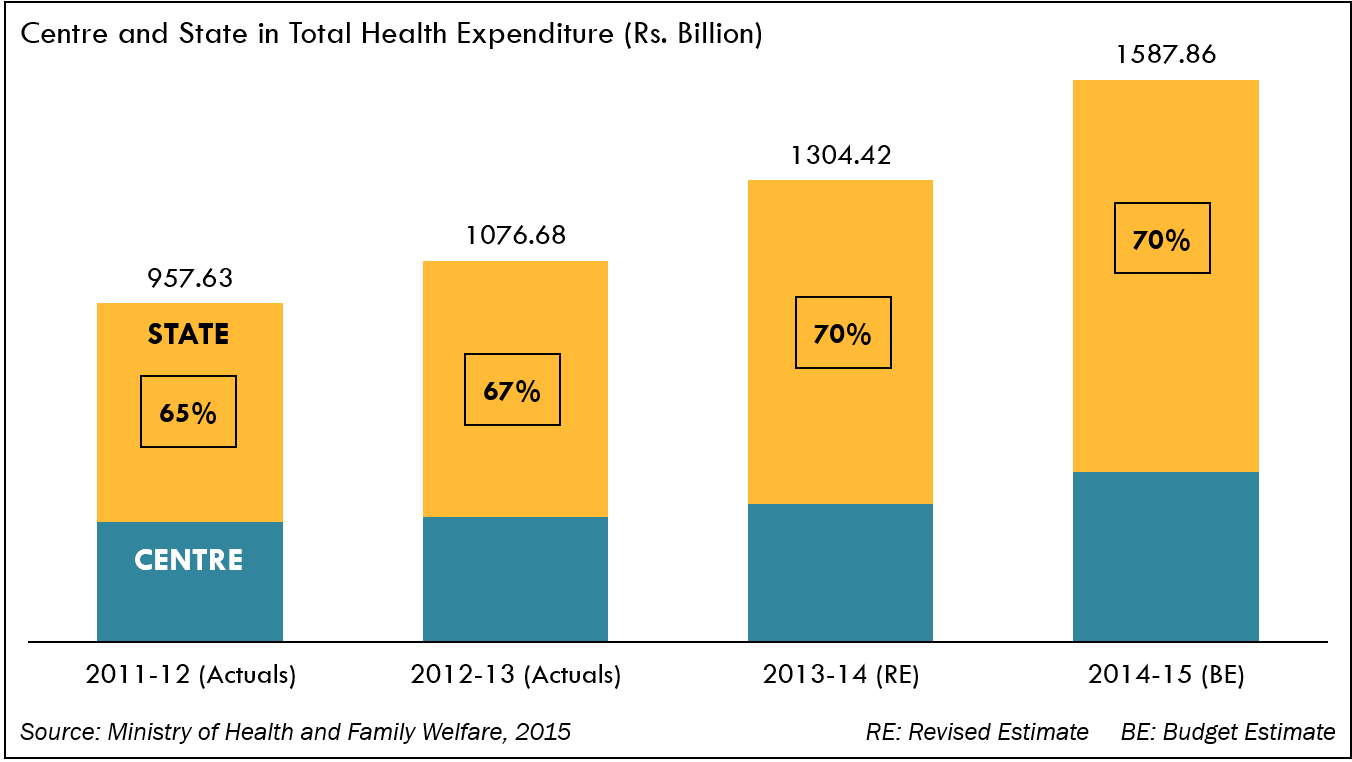 Earlier this month in Delhi, we presented and discussed our ongoing work with the Accountability Initiative (AI) (summarized in this draft paper) at PAISA 2015: Studies on Tracking Social Sector Spending in India and with members of the CGD-AI working group on intergovernmental fiscal transfers for health in India. We also had the opportunity to meet other key stakeholders such as NITI Aayog, the major policy think tank of India’s Central government.

Throughout our conversations, two issues were apparent: first, the radical devolution decided by the 14th Finance Commission has huge potential implications for state health budgets. And, second, states’ experiences during previous Finance Commission transfer schemes merit closer attention and highlight lessons learned for those of us interested in how much and how well state governments will spend on health.

More Room for State Spending under the 14th Finance Commission

Increases in fiscal space at the state level will be large. As we look at budget estimates for 2015-16, we estimate the 14th Finance Commission devolution to result in increases in per capita transfers of up to three percent of state GDP (see figure below). The question is how much will be allocated to health and what leverage the Center will have to influence State spending decisions given its shrinking pot of funding. 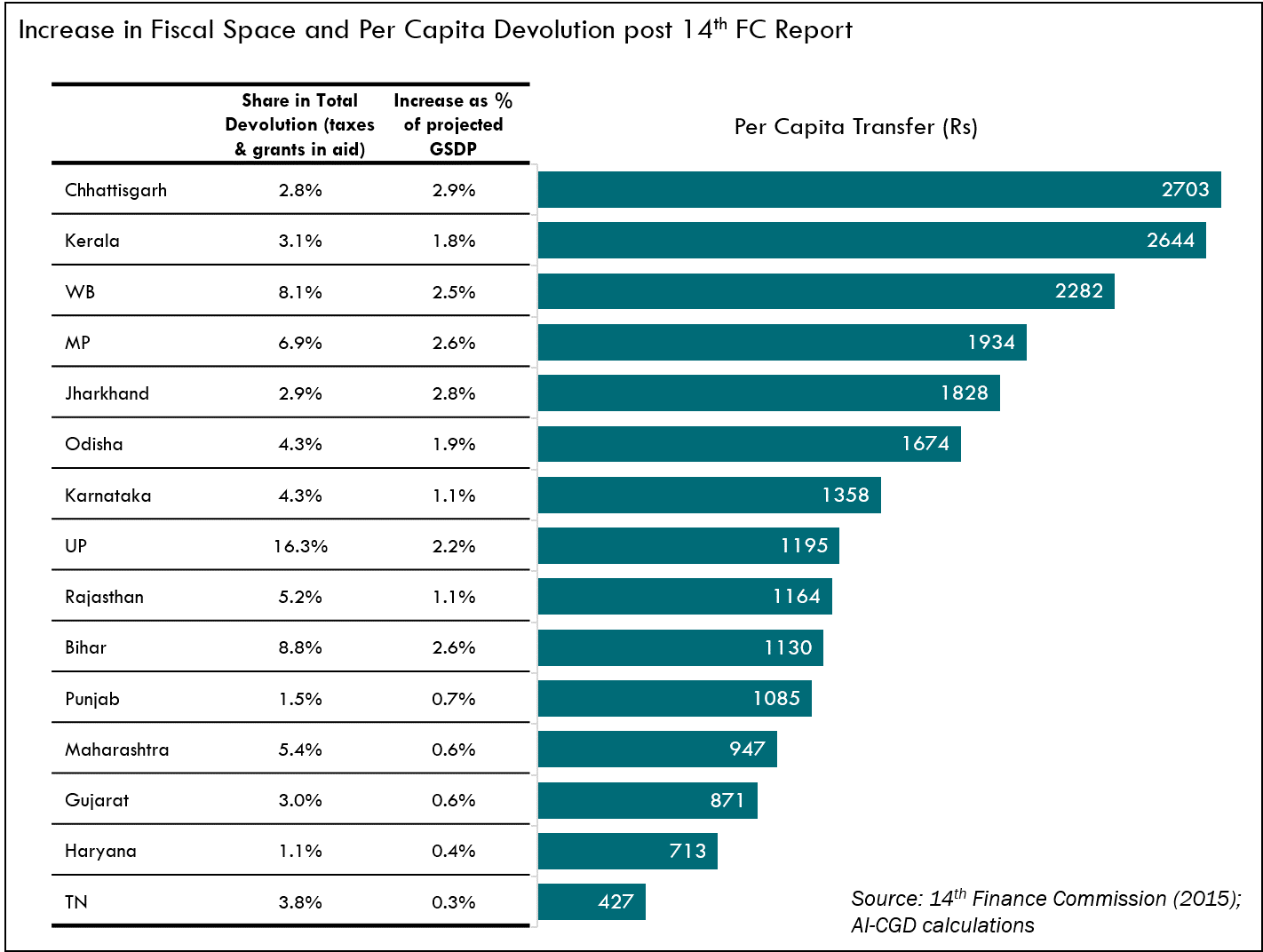 Learning from Incentives in the 12th and 13th Finance Commissions

The 12th Finance Commission provided health-specific transfers known as “equalization grants” totaling US$920 million (or Rs.5887.08 crore) to seven states, with the goal of reducing inequality in per capita expenditure on health across states. Yet nearly one-fifth of these grants were not released. Why? One possibility is that the grants were not significant enough for states to go through the administrative measures required for their release. Most states had to navigate multiple transfers, not limited to health, each with its own independent criteria and release mechanisms. Lesson learned: as the Central government thinks about how to allocate its shrinking precious resources, consolidating Central flows may create a more significant incentive for States to pay attention. 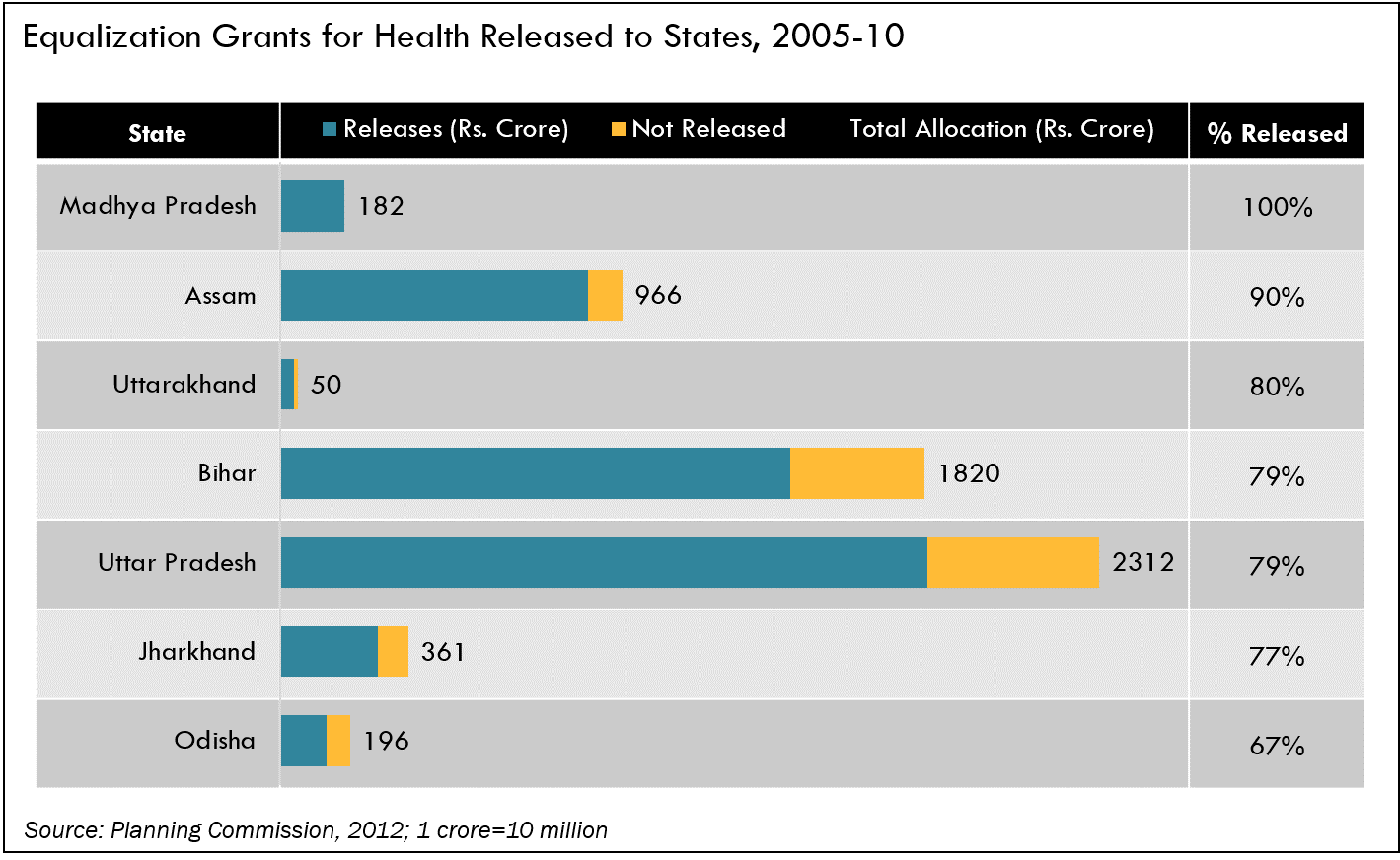 The 13th Finance Commission provided a performance incentive, totaling US$780 million (or Rs.5000 crore), to states that reduced their infant mortality rates. 65 percent of allocations went to states that comprise less than 10 percent of India’s total population. The complicated allocation formula focused on reduction of infant mortality rates from the median, without consideration of factors such as population. And similar to the equalization grants, the amount of the incentive grant was simply not big enough for states to reorganize administrative procedures. Lesson learned: the structure and size of incentives should be carefully designed for an outcomes-based transfer to be successful. Along with a large enough prize, the 14th FC or Central government may consider adding on a better designed bonus that would create more virtuous incentives for health results.

The Central government is currently pondering its role vis-à-vis the states in health and the regulations that will be put in place to govern health financing and delivery. These decisions, which affect centrally-funded programs like the National Health Mission, are up to a group of state Chief Ministers who are currently deliberating the fate of the federally funded social sector schemes. They are said to have these by this summer, and we’ll be watching eagerly—stay tuned.